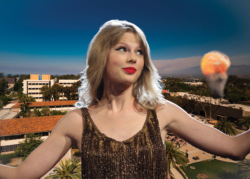 “We had since June to prepare. June!” second-year Betty Garden said. “I knew this day was coming, but I never expected it to hit this hard. There’s just no way to prepare for the emotional onslaught she causes.” Houses across Isla Vista pressed play on the album last night without sufficiently preparing a Taylor Swift Emergency Box, filled with tissues, junk food and pictures of puppies.

“I was doing fine for the most part,” fourth-year Caroline Dare said. “But then, when she says ‘I think it’s strange that you think I’m funny ‘cause he never did,’ on ‘Begin Again,’ I lost it.” Dare’s housemates called 911, but since they were too backed up, she had to get the care she needed this morning. On her hospital stay, Dare said, “Being a Swiftie is a difficult task, but I know God put me on this journey for a reason.”

As a result of the singer’s threats, UCSB’s Counseling and Psychological Services (C.A.P.S.) has seen an immediate increase in consultations. The most-cited reason for first-time visits was “Taylor Swift,” followed in second place by “Tyalor Siwft.” Due to the tear-stained intake forms, C.A.P.S. assumes these students were trying to spell Swift’s name but were either shaking or crying too hard to do so. “We are working overtime for students to get the mental help they need as a result of Swift’s actions,” Stacey Macey, director of C.A.P.S., told Nexustentialism. “We’re doubling the number of students we see weekly, going from one to two. When crises hit, we need to do everything we can.”

“All Too Well (10 Minute Version) (Taylor’s Version) (From The Vault)” was one of the most egregious and hostile attacks of the night. Complete with a new short film, the emotional break-up song tauts lyrics like “And you call me up again / Just to break me like a promise / So casually cruel in the name of being honest / I’m a crumpled up piece of paper lying here,” prompting several depressive episodes and a tissue shortage in surrounding stores. Jake Gyllenhaal, the culprit who inspired the song, was not available for comment. His representative said he was coincidentally embarking on a year-long solitude retreat in the Himalayas where no one can find him.

The Central Intelligence Agency held a briefing on Friday morning, addressing the steps they are taking following Swift’s damages. “Superstar Taylor Swift has been on our radar for a while,” the director of the organization Brad Goddard said. “Last year, we attempted to find her cabin that she’s holed up in, releasing these threats to American security,” referencing 2020’s “folklore” and “evermore” albums. “The result was unsuccessful. All her press is virtual, leaving a non-existent footprint. She’s a master at this.”

Sam Franzini is a Swiftie first, a Nexustentialism writer second, an Italian third and an American last.