The Daily Nexus
Sign of the Times
Libraries Are an Invaluable Resource, and They Should Be Protected and Prioritized
November 4, 2021 at 9:00 am by Kareena Dhillon 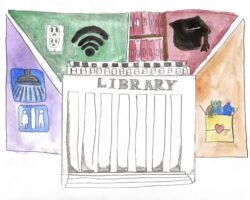 In 2021, societies and lives have been ravaged by the multitude of events brought on by the pandemic. As businesses, both corporate and small, closed their doors to the public, we were reminded of the crucial necessity of libraries. As havens for public education and social uplift, libraries are an inexhaustible resource for community members. Funded by the county and the state of California, libraries are one of the few remaining pillars of social infrastructure we have left.

Libraries produce and publicize a vast amount of resources that individuals might not have had access to otherwise. For example, libraries offer resume building and interview training services to help community members get jobs. Santa Barbara libraries offer food bank and food stamp services, showers, shelters, email providers, medical assistance and mental health and substance abuse services. With Santa Barbara’s worsening housing crisis, these services are now more important than ever. Not to mention, libraries provide access to shelter, internet services and restrooms, which were scarcely available for the houseless population in Santa Barbara during the COVID-19 pandemic. Additionally, services for LGBTQ youth are provided by the Pacific Pride Foundation, offering HIV/AIDS prevention and testing services to all members of the LGBTQ community in Santa Barbara. Libraries are also one of the few remaining services that facilitate the literacy of houseless populations, especially for young children. Usually shelters and community centers lack the funding for literacy programs, but most libraries offer free literacy development programs, including the Santa Barbara Public Library.

The Santa Barbara Library system offers resources for members of all ages, including local community resources such as voter information and government/legal assistance. The SB Library system maintains significant programs for immigrants such as low-cost and pro bono legal services, health clinics, citizenship tutoring, along with a multitude of services for detained families. Additionally, there are several resource centers for understanding immigrant rights and how the United States legal immigration system is designed, a necessity for preserving immigrant families in our current geopolitical climate. They also provide several COVID-19 services including the Emergency Broadband Benefit, which delivers up to $50 a month towards broadband service for eligible households and up to $75 for qualifying Tribal lands, as well as funding towards digital devices for up to six months after the pandemic officially ends. The sustainability and cohesion of our community relies on community members having access to these services and gaining digital literacy.

While more than 90% of Americans see their library as “very important to their community,” library funding gets cut on an annual basis. They are always one of the first institutions to have cuts in their budgeting. In 2018, the city approved a 5% per capita reduction that further magnified revenue shortfalls with county libraries. This reduction directly reduced library hours, service levels and staffing for almost all branches in the county. As a result, there are not enough libraries to accommodate the amount of people that use them. According to a 2016 survey conducted by Pew Research Center, almost half of all Americans ages 16 and older, had used a public library in the past year. Additionally, two-thirds said closing their local library branch would have a major impact on their community.

In a society where access to the internet and technology is of paramount importance, libraries are invaluable to community mobilization and cohesion. Libraries have a huge impact on our social and academic lives, whether we realize it or not.

In fact, in 2020, librarians were crucial in augmenting online services and developing new ways to serve their communities during the pandemic. Library staff provided access to infinite amounts of resources in an age of misinformation, with two-thirds of Americans saying their local public library helped them decide which information to trust in a survey by the Pew Research Center. In support of this, President Biden’s inauguration of the American Rescue Plan (ARP), designed to provide direct relief to Americans and aid the economy, includes billions of dollars in library-eligible funds. Libraries bring unique resources to the ARP’s recovery mission, upholding their mission statement to support citizens disproportionately affected by the pandemic. The ARP allocates $200 million for libraries through the Institute of Museum and Library Services, an independent federal agency that provides grants to libraries and museums. Funds will be sent to state library administrative agencies, who can then deliver them to local libraries. Additionally, libraries can apply to the $7.17 billion Federal Communications Commission’s Emergency Connectivity Fund to receive 100% reimbursement for purchases of equipment that provide internet connectivity and devices to the public, further enhancing digital inclusion.

In a society where access to the internet and technology is of paramount importance, libraries are invaluable to community mobilization and cohesion. Libraries have a huge impact on our social and academic lives, whether we realize it or not. They are one of the few remaining mechanisms in our society that allows for free access to education and social services. While collegiate and research libraries are exclusive to their respective groups, community libraries are accessible for all members of the community.

Libraries facilitate an unparalleled sense of social infrastructure with their collaborative yet comfortable use of physical space. Not to mention, each library is equipped with digital resources, carefully organized by a staff committed to upholding access to information for its community members.

It is frustrating to see funding for libraries slowly dissipate, especially when access to the internet is critical to self-preservation. Libraries maintain a mission statement dedicating themselves to providing free access to resources and cultural insight for all community members, which is difficult to maintain as funding decreases. Unfortunately, these pillars of collaboration fall on deaf ears in the market logic of our political climate. Not to mention, being in a quickly evolving society where most platforms are being moved online, libraries serve as one of few remaining, functional social facilitators to counter global disconnect.

Kareena Dhillon believes that the inexhaustible resources libraries have to offer should not be reduced due to government spending, as they remain a critical component of social cohesion.

A version of this article appeared on p. 14 of the November 4th, 2021 print edition of the Daily Nexus.

Thanks for your helpful article!