The Daily Nexus
Sign of the Times
#FreeIV — End the Halloween Police Occupation Now.
November 4, 2021 at 10:00 am by Taylor Clark 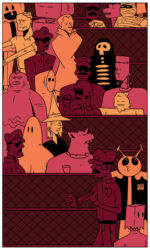 A specter is haunting Isla Vista — the specter of police occupation.

It is self-evident that Halloween is one of the most popular holidays of the year, and with good reason. Halloween is, by its very nature, an opportunity for people to escape the stress and mundanity of modern life — a time when people are temporarily encouraged to take on a new identity and granted free license to whisk themselves away from the banal horror of midterms or their 9 to 5, and to cloak themselves in a persona of their choosing. It’s a holiday for candy, friends, late nights, spooky movies, celebrations, dancing, festivals, more candy and maybe even some adult beverages.

Under the right circumstances, Halloween represents a beautiful opportunity for building community — to unite people in solidarity around the shitty monotony of things like homework and low-wage jobs and to unabashedly embrace the abnormal.

Unfortunately, the only thing residents of I.V. were allowed to embrace this year was their couch. For the eighth year in a row, we all participated in our time-honored tradition of sitting on our collective asses through a draconian 6 p.m. noise ordinance, waiting impatiently for what should have been one of the most exciting weekends of the year to simply pass us by. Riveting.

But at least I.V. Foot Patrol Lieutenant John Maxwell seemed excited about the holiday season. “Right now, it seems like it’s going to be a good weekend,” Maxwell said during the Oct. 14 I.V. Community Network Meeting.

“I think it’s going to go well; we’re hoping for a local event, and a peaceful one,” Maxwell continued. I’m not sure if watching “The Nightmare Before Christmas” at home in my pajamas at 10 p.m. on Halloween night really qualifies as an “event,” but at least John enjoyed hitting the sack early.

However, what’s been conspicuously missing from the discussions of what a “successful” Halloween in I.V. looks like are the thoughts and voices of the students and residents who actually live here.

The 6 p.m. festival ordinance isn’t exactly something we voted for; rather, it was enacted by the Santa Barbara County Board of Supervisors, a body that wields near-total control over I.V.-related issues but whose constituency is primarily based outside of the community. We also didn’t ask police officers from across the UC system to come and crash in I.V. for the weekend — that was Lieutenant Maxwell’s call. Nor did we exactly beg Chancellor Yang to use our tuition dollars to put fences up around student housing across campus and I.V. Yet, nevertheless, we’re expected to live with it.

Simply put, university and county policy around Halloween weekend has historically been formulated and implemented in a profoundly undemocratic way. While framed as being in the interest of  “public safety,” it has been synthesized and enacted without the input of the very public it claims to protect. Outside the occasional poorly publicized and attended town hall, no attempt has been made to elicit the perspectives of the students and residents of I.V. as to what we think a “successful” Halloween weekend would look like. It’s not something that the powers-that-be are particularly interested in.

But, that hasn’t prevented students from offering a radically different vision of what Halloween weekend could be. Last Saturday, a large coalition of student and I.V.-based organizations held a festival in protest of the noise ordinances and hyper-militarized police presence. It was an effort I was intimately involved in as co-chair of the UC Santa Barbara chapter of Young Democratic Socialists of America (YDSA).

Simply put, university and county policy around Halloween weekend has historically been formulated and implemented in a profoundly undemocratic way.

The festival was a pretty fantastic illustration of what Halloween in I.V. could be. There was live music, art, food, candy, costumes and approximately 100 people at its peak. The event was entirely student-organized and driven. We had a volunteer staff of around 15 students who had received de-escalation and conflict mediation training beforehand in case I.V.’s infamous party culture got out of hand, which ultimately proved to be unnecessary. The primary obstacles we encountered in planning and promoting the festival were the event’s timing — we had to start at 11 a.m. to get around the noise ordinance — and the ever-present fear among students that the cops would crack down on us anyway. In YDSA’s experience, it was literal “big government” that got in the way of a safe and successful Halloween weekend, not the often-assumed inability of college students to control themselves.

In addition to the festival, we had been asking students and organizations to sign our letter to the Santa Barbara County Board of Supervisors, calling on the county to simply reduce the massive police presence and roll back the overbearing noise ordinance.

Hundreds of students have signed the letter, which was only released a week and a half or so before Halloween weekend. In that brief time, I’ve personally had conversations with dozens upon dozens of students about the letter, putting in the legwork of community-building that the university loves to pay lip service to. In nearly none of those conversations did the students themselves actually feel that the police presence was necessary, and everyone hated the festival ordinance.

Something else that we all agreed on was that Halloween in I.V. has had a checkered past. Most of us don’t want 10,000+ out-of-towners mobbing our streets every year, and historically these same outsiders have been responsible for over 90% of the crimes committed during Halloween weekend. I’m personally convinced that the checkpoints into I.V. and UCSB have been an unequivocally good thing precisely because they’ve prevented the hordes from descending upon us.

But this raises the question — since the legions of outside partygoers have been successfully repelled by measures such as the checkpoints, why do we still need the massive police presence? What’s the purpose of continuing the 6 p.m. noise ordinance? Why are we fining college students $400 for playing music in their own homes on Halloween weekend? Why are the residents of I.V. still being punished for something that wasn’t really our fault to begin with?

It’s a waste of public resources at best — this is money that could go toward solving the ongoing housing crisis that I.V. has been experiencing. More accurately, I.V.’s Halloween police state is an Orwellian intrusion into the lives of UCSB students and I.V. residents who would really rather be left to jam out to Michael Jackson’s “Thriller” in peace.

The police occupation is unpopular — it’s expensive, it’s antiquated and it’s despotic. It’s time for it to end.

Taylor Clark believes that Isla Vista residents have a right to live their lives during Halloween weekend, and it’s time for the Halloween-based police occupation of I.V. to end.

A version of this article appeared on p. 14 of the November4th, 2021 print edition of the Daily Nexus.

Apart from being too long this editorial contradicts itself. You don’t want thousands of outsiders attending Halloween in IV but you also don’t want police. 10,000+? Try 30,000+ and the town gets ripped to pieces. Do you think the County enjoys paying for the additional police?–that local taxpayers like dumping their hard earned tax dollars into IV every Halloween? Try searching this newspaper with keywords “Halloween in IV” and you may gain some understanding of just how much trouble the stupid party caused. Hundreds of arrests and injuries, people falling off the cliff, a community under siege for three days… Read more »

Each article written is worse than the one before it.

6 pm noise ordinance allowed families and their school-aged children to attend events and safely walk the streets. Does writer believe college-aged students and their drunken antics that cancel out everyone else’s fun should be the only game allowed in town? It was a fantastic weekend by all accounts.

Actually, the community is annoyed by being overrun by 30,000 visiting students who see fit to destroy the place in a drunken frenzy. Try focusing on getting a valuable degree in the short time you are here so that you don’t disappoint your parents when your time is up. And if you are concerned about the shortage of housing, there is a bedroom waiting for you in your parent’s large comfortable home. Please make room for the next guy. You can then practice your communist rhetoric around the dinner table with the people that at footing the bill for your… Read more »

“Why are the residents of I.V. still being punished for something that wasn’t really our fault to begin with?”