The Daily Nexus
Sign of the Times
The World Is Literally on Fire and Here’s Why
September 23, 2021 at 12:00 pm by Athina Mihalopoulos 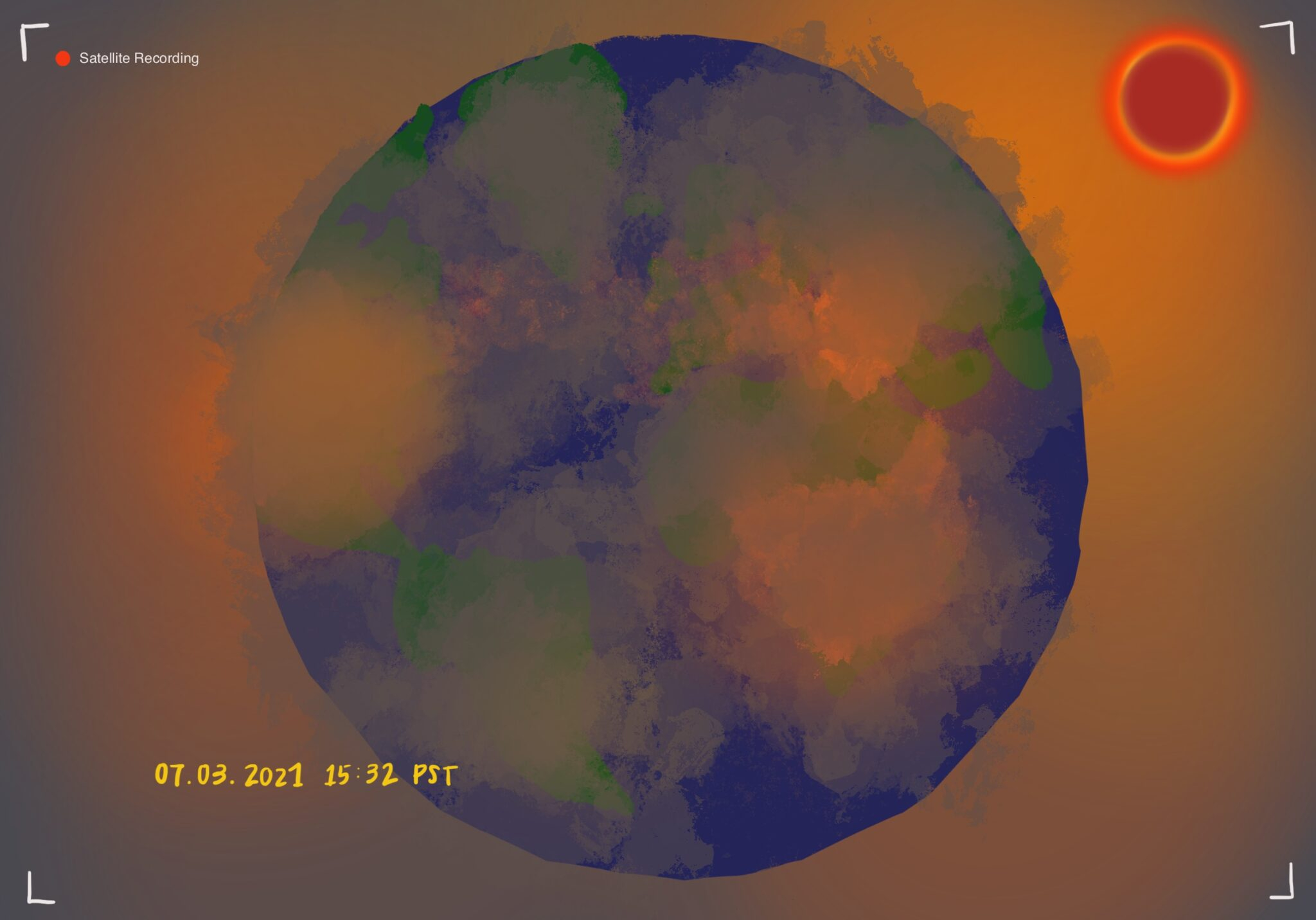 The past few weeks, I’ve been waking up to the smell of ash and the view of fog from my home in Athens. Since the start of July, entire villages have gone up in flames in Europe, North America and Russia. Additionally, Greece has been experiencing one of the worst heat waves in its long history, reaching the highest recorded temperatures since 1987. The fires have been raging for more than a week, destroying the lives of thousands of families, forcing them to evacuate their homes and become displaced in their own country.

There have been huge debates about the source of the fires in Greece. Some people argue that it’s because of climate change and that all of these fires were caused by the recent extremely high temperatures. Others blame the country’s prime minister, saying that he hadn’t prepared Greece’s forests for this type of disaster. There’s also the belief that the fires were started by arsonists, with their motives ranging from insurance and welfare fraud to revenge and vandalism.

I don’t think the fires started from only one of those factors. I think it was a combination of arson and climate change that caused this huge disaster. The fires were too big to be only caused by the heat wave and, at the same time, they were set in too many locations to be only caused by arsonists. It’s important to know that in Greece, arsonists illegally set fires because they know that after the fire has ended, the government will allow the burned land to be cleared for residential development. This started in the 1980s, when people could illegally occupy burning forested land due to the lack of a land register and poor law enforcement. The legalization of occupying these burned lands created a motive for arson. That’s why it’s very unusual for arsonists to target entire villages where children and families live. They are more eager to set fires in big forests that have a small number of locals, since they don’t have any interest in killing people. So, how could these fires be caused by arson when they wiped out entire villages with locals and parts of land that can’t really offer any welfare or insurance?

That’s where climate change makes an appearance. Maybe these fires were meant to be small — just a tiny part of the forest — and were never meant to burn the whole region of Attica in Athens. However, it is because of the heat wave that these fires spiraled out of control. And the heat wave was a result of extremely unusual weather conditions, which are all caused by climate change. So, we can blame some of the damage to arson, but most of the damage was caused by climate change. The real damage is not the trees and the land. It’s the houses, the fortunes, the people and the families with small children who lost their homes. It’s important to understand that this loss wasn’t the goal of arson.

Every single one of us contributed to this tragedy, which is why this should be our wake-up call to change.

I am in no way trying to defend the arsonists, because the fires wouldn’t have started if it wasn’t for them. (Many arsonists were caught and arrested for starting the fires.) I’m just saying that the fires wouldn’t have been that big if the cause was just arson. There have been many fires caused by arson in the past, but none of them were as large or devastating as the ones in Athens this summer. That’s because all those past fires were started in much lower temperatures, making them easier to take out. Maybe if it wasn’t for climate change the fires would have been much smaller and these entire villages would still exist today.

So, as a human living on earth in the 21st century, I am also taking responsibility for these fires. As much as I couldn’t understand it right away, I can now see that I have very much contributed to the loss of those villages this summer. For example, I’m not used to unplugging my TV and computer when I’m not using them. Also, most of my meals are not meat free, and most of the food I have in my house isn’t organic. In addition, I’ve been into more than six transatlantic flights this past year, and I’ve barely used any public transportation. These are all actions that don’t have such an impact on their own, but imagine the impact they have when most people on this planet have behaved like myself in the past year — only that this impact is no longer an imaginable scenario but a reality for the whole world.

Greece wasn’t the only country that experienced an unbearable heat wave this summer. Sicily hit a record temperature of 48.8 degrees Celsius, Europe’s highest temperature ever. Cyprus lost more than 50 square kilometres of forest land due to wildfires. Thousands of people in Turkey had to abandon their homes due to the raging fires that threatened the country’s southern coasts. Algeria, Tunisia and Lebanon also experienced devastating fires that were caused from high temperatures. Northern California experienced the largest wildfire in the state’s history, scorching an area more than twice the size of New York City. Even Canada had to deal with 279 fires this summer. The list of countries goes on and so does the list of homes that were damaged, lives that were lost and children that are now traumatized. Scientists had predicted that the world would experience a “climate crisis” soon, but as Philip Mote, a climate scientist at Oregon State University said, “I’ve been involved with climate research for 23 years, and I honestly didn’t think it would get this bad this fast.”

If only all of us had consumed less, used renewable energy or at least rode our bikes more, maybe these fires wouldn’t have gotten out of control this summer. Therefore, the loss and trauma that so many families experienced is the responsibility of the whole world. It’s not their own personal problem. Every single one of us contributed to this tragedy, which is why this should be our wake-up call to change. This destruction could affect my family’s house one day, my friend’s house or the hometown of someone I really care about. This crisis is something that climate change activists have been warning the world about for years. After a summer when the world was literally on fire, I think it’s time we start taking these warnings seriously.

Athina Mihalopoulos would to stress that if you wish to donate to Greece, the Hellenic Red Cross (the Greek arm of the International Federation of Red Cross and Red Crescent Societies) has opened a fundraiser for those affected by the fire. The organization is taking donations via bank transfer, the details of which can be found here. All deposits for the fires should be marked “Pyrkagies.”