The Daily Nexus
Sports
Messi Drives Into the Copa America Semifinals as Ronaldo Spins Out of the Euros
July 10, 2021 at 8:05 pm by Garret Harcourt 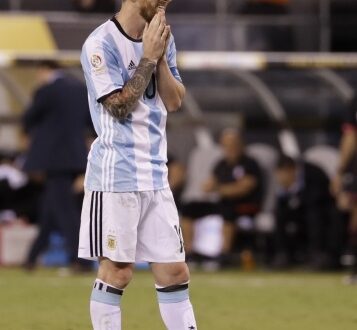 Messi has a chance to finally win an international trophy with Argentina. AP Photo / Matt Slocum

As these major tournaments are coming to a close, many have to wonder if this is Ronaldo and Messi’s last Copa America and Euro Championship. With that being said, this is Messi and Ronaldo’s last chance to possibly add an international trophy to their “greatest-of-all-time” resume.

Currently Messi holds the edge with more club accomplishments but only across one league and staying put at Barcelona. Ronaldo carries fewer club trophies but has had international success with Portugal, unlike Messi.

When talking about the greatest of a generation, one must point out the greatness of one player and the flaws of the other. “Ronaldo has shown he can really succeed in any league with anyone. As great as Messi is, Barca is not really the same since Xavi and Iniesta left, who are I think arguably some of best midfielders to ever play,” lifelong Manchester United fan Narvin Amatya, who once got to see Ronaldo play in person, said.

As Copa America progresses this will be another major tournament Messi has been able to progress into with Argentina, including the World Cup finals loss. “… the only thing holding Messi back is his lack of international championships. Winning the Copa America and hopefully the next World Cup would cement his place as one of the greatest ever,” Diego Jasis, an avid Messi fan who shares an Argentinian background like Messi, said.

If Messi was to not win the Copa America with Argentina, it would spark a debate that Messi and Ronaldo’s shortcomings in club and country would be the passing of the torch to the next generation. “The era of those two as figureheads of the grandest clubs in the world ended with Ronaldo’s departure from Madrid, so the iconography is less tangible,” Jasis said.

Time and time with the two greatest to lace up in the world of football, their individual success still speaks wonders, as each are in contention to be the top scorers at the Euros and Copa America. “I think the era of Messi and Ronaldo is coming to an end unfortunately. They still have a few years left to play at the very top,” Amatya said. “But now it seems that the torch is going to slowly be passed to the younger generation.”