The Daily Nexus
Sign of the Times
Addressing Racial Disparities in Vaccine Distribution
June 15, 2021 at 9:00 am by Sophia Lovell 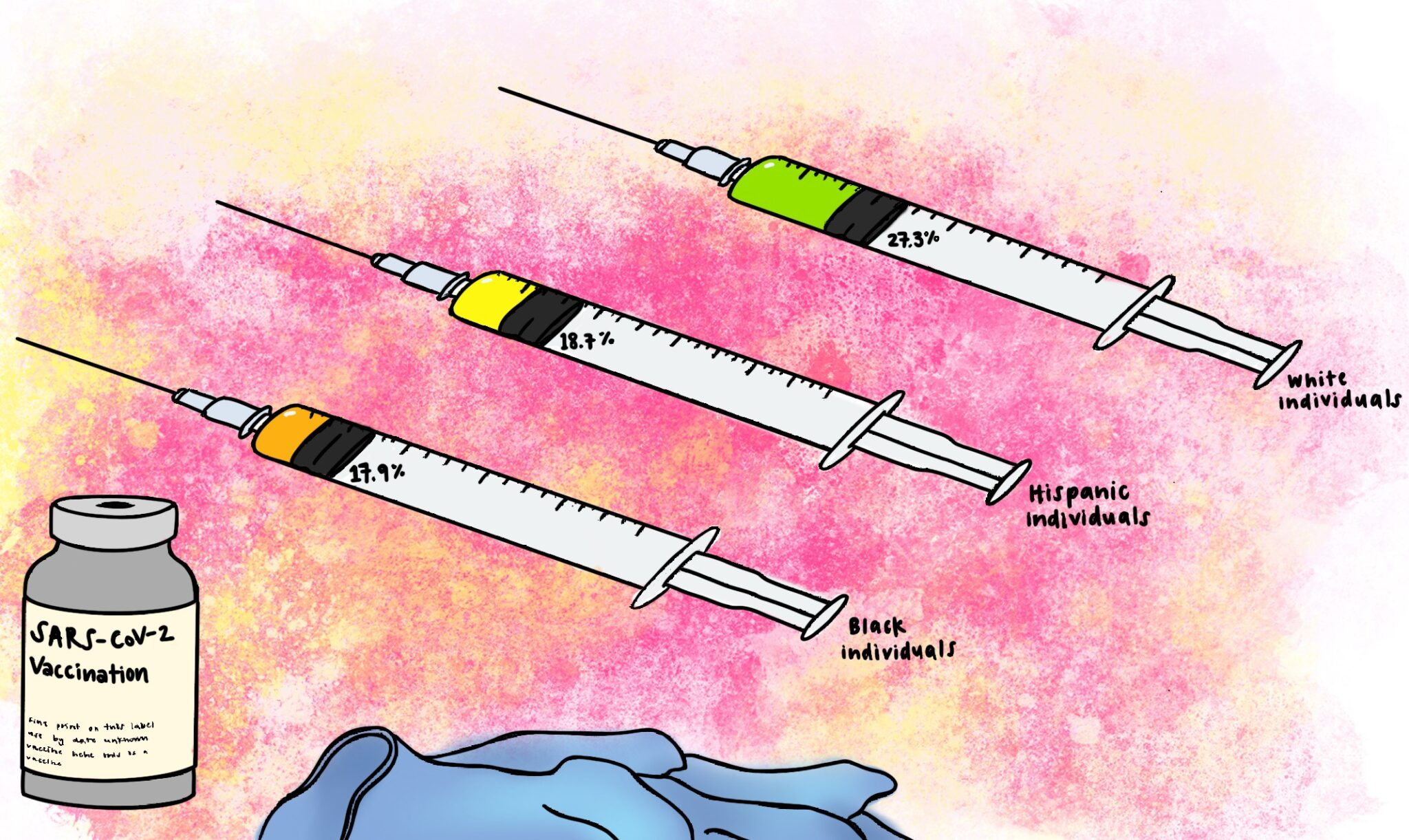 Now in the tail end of our country’s 15-month-long battle against COVID-19 that has resulted in nearly 600,000 deaths, some citizens have begun to receive vaccinations, which provide a ray of hope for many. However, it seems as though not everyone has equal access to the vaccine, and, as usual, minority groups are getting the brunt of this unfair distribution.

As I stood in line to receive my first dose of the vaccine, I watched a Spanish-speaking couple standing near me. They got to the front, and were told that they must wait because they had not had enough time since their first dose to receive the second. However, there was no translator, and they struggled to understand what the English-speaking volunteer was communicating. Luckily, my friend was fluent enough in Spanish to help transfer the information, letting the couple know the date they could return. Without my friend’s help they might not have known how to receive their second dose.

According to the Centers for Disease Control and Prevention (CDC), out of the number of people vaccinated with at least a single dose and whose racial identities were known, 61.8% were white. Further, while 27.3% of white individuals have been fully vaccinated, only 17.9% of Black individuals and 18.7% of Hispanic individuals have received theirs.

Throughout this pandemic we have watched as racial minority groups have been disproportionately affected by the virus. Not only has the distribution of the vaccine been uneven, but Project Hope, a global health and humanitarian relief organization, published findings that in each age group Black and Hispanic individuals were more likely to catch the virus and experience severe COVID-19 symptoms than white individuals.

We must continue educating our healthcare providers on ways to eliminate their inherent biases and interact with patients of racial and ethnic minorities.

This disparity in the effects of the virus could come from several different outlets, all stemming from systemic racism. Project Hope found that Black and Hispanic individuals were more likely to be subject to higher health risks, which could lead to magnified symptoms. They were also more likely to work in essential jobs: healthcare, public safety, food, etc. Racial and ethnic minorities are also more likely to live in homes with a greater number of members in them. This adds even more risk, as there are more people going in and out of the residence.

Kaiser Family Foundation has found that the vaccination rates for these marginalized groups are much lower than their share of cases and deaths. For example, in California, Hispanic individuals have only received 27% of the vaccinations, but they account for 48% of total COVID-19-related deaths and 40% of the general population.

There is so much that needs to be done on both an individual and a systemic level. First and foremost, the communities who are being most deeply impacted by the virus should be the first to receive the vaccine. Although these statistics show a racial divide, healthcare disparities are witnessed throughout several groups and are intersectional in many ways. Often these marginalized groups are also affected by their income, language barriers, citizenship status, etc.

According to research by the National Center for Biotechnology Information, staff biases, access to insurance, discrimination, lack of interpreters, lack of diverse staff, and lack of availability due to work and children all play a weighty role in the racial disparity in healthcare. We must continue educating our healthcare providers on ways to eliminate their inherent biases and interact with patients of racial and ethnic minorities. Policy changes must be made as well. For example, I know several undocumented individuals who are eligible to receive vaccinations, however they are often made fearful of being deported or otherwise threatened.

Another important solution to be made is addressing health issues within certain communities which are suffering. Namely, populations which suffered greatly from COVID-19, such as the homeless population and essential workers, should be targeted to receive the vaccine in a timely manner. These communities often include individuals who are of less privilege, which has led to a backwards distribution of the vaccine.

With changes in both the systemic and individual levels, we can begin to bridge the gap in these racial disparities in healthcare and address issues regarding the reception of the COVID-19 vaccination.