The Daily Nexus
Nexustentialism
It's satire, stupid.
Ortega? What’s That? Babe, You Sound Kind Of Insane Right Now…
May 19, 2021 at 4:20 am by Sam Franzini 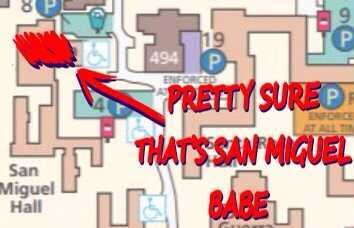 I’ve literally never heard of it. You said it’s a dining hall? There’s only ever been three, De La Guerra, Carrillo and Portola. DLG was our favorite. You’re saying there’s a new one?

Oh, so it’s not new? Have you been? Okay, God, I’m just trying to figure out what you’re talking about. Would you just take a deep breath, calm down and explain it again?

… Alright. So I’m hearing there’s this fourth dining hall ]… which has a mural on it … representing Homer’s “Odyssey.” No, I’m not saying you’re crazy! But you have to admit that’s a bit unbelievable. I mean, all the other dining halls are normal, and you’re saying that this one just has a random piano plopped down in it that just any random person can play.

I hate to ask this, but, like … Were you on anything when you went to this “Ortega”? Did you just get lost somewhere and find some food in a dumpster? I know sometimes when you have a hard time focusing, you like to take long walks and explore. Did you just wander into a new restaurant in Isla Vista? Maybe this was something you thought of in a dream?

I do believe you! But when you’re just making up places that I’ve never heard before, it’s a little suspicious.

Okay, I get it … is this a bit? C’mooooon, stop playing around, babe. Let’s get some real dinner to take your mind off of all this.

Can’t believe you almost made me fall for it! But you know nothing gets past me. Ruby Tuesday has an actual salad bar we can go and enjoy. Maybe that’s what you were thinking of?

Sam Franzini has heard a lot about this “Ortega” but has never seen it in person.