The Daily Nexus
Sign of the Times
Why Elton Muskrat Should Not Be Space President
May 6, 2021 at 9:00 am by Toni Shindler-Ruberg 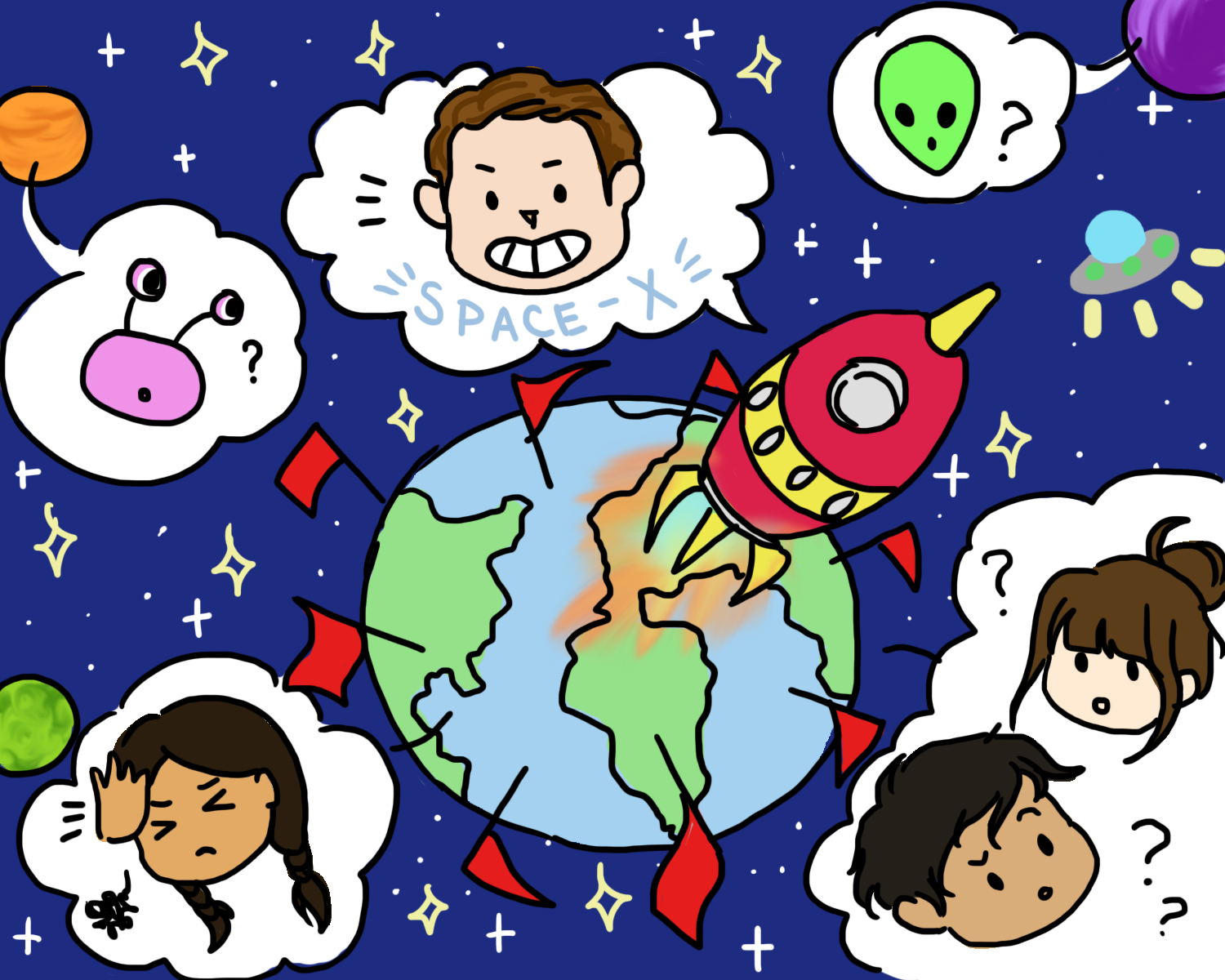 May 30, 2020: SpaceX made history as the first private company to launch humans into orbit.

May 6, 2021: Toni Shindler-Ruberg set out to dismantle the romanticized narrative of “discovery,” private spaceflight and interplanetary colonization.

On Earth, the so-called “discovery” of the “New World” hinged on the white European ethnocentric perspective — a naïve, ignorant and dismissive worldview that did not account for other people developing advanced civilizations beyond their own experience. Complex, established indigenous communities populated North and South America long before Columbus landed on shore.

Discovery and the closely linked trend of colonization most often came about through force and violence. Columbus saw the native people as “obstacles” and his efforts of “discovery” resulted in the horrific deaths of many indigenous people.

That’s not to say that Mars’ colonization would disrupt some pre-existing extraterrestrial civilization — although we technically never know. Rather, I seek to highlight the patriarchal, white privilege-seeped origins of “discovery” and colonization.

Society’s gender stratification and devaluation of the power and worthiness of femininity is foundational to our relationship with and conception of nature — an entity that is associated closely with femininity or the “mother” figure. Femininity is powerful and strong, but the social inequity surrounding masculinity/femininity has shaped the imbalanced, destructive human-nature relationship. The social subordination of femininity leads to a sense of destructive entitlement, in which the exploitation and violence against nature is a common and wrongly justified occurrence. The destruction, pollution and conquest of nature are an extension and an analogy for the oppression and violence against femininity and women in society.

“Discovering” nature implies that it only exists or matters in relation to the male existence and male gaze. Colonization is forced physical oppression over pre-existing human populations, as well as forced control over Mother Nature.

The feminization of nature is a form of male conquest, a way to apply existing oppressive power structures to the language, conception and physical treatment of the biosphere.

Historically, voyaging was an expensive investment, funded by private investors and monarchs with the understanding that anything found would be the property of the crown — people and resources alike.

The feminization of nature is a form of male conquest, a way to apply existing oppressive power structures to the language, conception and physical treatment of the biosphere.

Men and the male ego dominated the highly political 20th century Space Race, often referred to as a war of scientific intellects. Spaceflight made little to no revenue. Instead, successes served to advance the political reputation of their respective countries. Wooden ships became spaceships — symbols of power, prestige and control. In other words, the space races of past and present are veritable multi-billion-dollar penis-measuring contests. Oh, you have a rocket? Well, my rocket is bigger.

In a time of heightened international tensions, the modern-day space race evokes Cold War-era international relations. International competition during the Cold War and Space Race era morphed into xenophobia and racism. The American space program brought the nation closer and provided jobs for workers, but it also led to a dangerous level of extreme nationalism.

With Sinophobia rearing its ugly head during the pandemic, it’s another stab in the gut to hear that the sole reason SpaceX doesn’t file patents is so China can’t copy them. Such actions and statements, no matter how public or private, perpetuate the characterization of foreign countries — specifically China — as sneaky, manipulative and threatening.

A little healthy competition is all well and good, but do we really need to add fuel to the divisive fire of modern day society?

Millionaires fund space companies, with the goal of “advancing the future of innovation.” Truthfully, they just want a ride on the sweetest crotch rocket to date.

And even supporters of spaceflight as an alternative to Earth are kidding themselves. Space is not a realistically viable habitat (not just in terms of physical space, but potable water) for the entirety of the global population.

But arguably, that’s their intention. The majority of the population doesn’t matter.

The reality is that the private space industry is a multi-million-to-multi-billion-dollar sink that neglects our earthly issues. Steadily rising global temperatures, famine, poverty, underfunded education and healthcare inequality are more pressing than ever.

Am I the only one who remembers that period when everybody was freaking out because NASA was “broke”? Recently, NASA bought a single seat on the Russian Soyuz spacecraft for $90 million.

When our attention is fixed on other planets, we delay or forsake improvement — and survival — on Earth.

The commercialization of space flight for the “everyday” citizen is a form of escapism and avoidance for those who can afford it. Axiom Space and SpaceX announced orbital joyrides for the cool cost of $55 million.

A 2019 report by the Bay Area Council Economic Institute estimates it would cost $12.7 billion to end homelessness in the San Francisco Bay Area.

But financial support alone will not solve all social problems. When our attention is fixed on other planets, we delay or forsake improvement — and survival — on Earth.

To Elon Musk, “It’s important that we become a spacefaring civilization and be out there among the stars. We want the things that are in science fiction novels and movies … to be real one day.”

You know what I want to be real? Families having food on their table. Universal, quality education, free healthcare, expanded social programs, restorative justice programs … the list goes on.

Axiom investor and future AX-1 passenger Larry Connor shared his thoughts: “We have lots of domestic problems and challenges, as well as international, but does that mean we should forget about the future?”

Connor embodies the out-of-touch upper echelon of society — so far removed from the rest of us, the financial padding in their pockets protects them from any foreseeable consequences that we must shoulder. He pretty much says, “Screw it,” and moves on. There will be no future — interstellar or terrestrial — if life continues on its current trajectory.

Once the global population realizes the uber-wealthy serve no one but themselves, space will be an airless, directionless panic void into which the rich can escape. Private spacecrafts will become multi-billion dollar ejection pods from facing earthly consequences.

I hear the cries now … “Eat the rich!” “Off with their heads!” (À la French Revolution.) Guillotines don’t work in zero gravity, a fact of which Musk and Bezos are certainly aware. (For legal purposes, I feel it necessary to emphasize the fact that I do not harbor any active or future plots concerning the untimely demise of any bald or balding billionaires.)

Don’t get me wrong: I am a strong proponent of change and innovation. Advancements in the tech and medical industries open up new avenues for connection, collaboration and quality of life. Cars, phones, pallet homes, color-changing sutures and vaccines are all innovative developments that serve the larger purposes of mental and physical well-being.

Of course, it’s exciting to see roaring rocket boosters, new production emphasis on sustainable durability (however much you can salvage from a violent orbital re-entry) and astronauts’ zero-gravity selfies. However, I see the newest push for spaceflight as innovation for the sake of innovation, rather than addressing the current, grave/critical issues facing us in the here and now. Space does not generate revenue, nor does its exploration provide answers for terrestrial issues.

Only by refocusing and uniting our intellectual, emotional and financial resources to Earth’s future will we finally take one small step for man and one giant leap for mankind.

Toni Shindler-Ruberg thinks we should give space some space.