In the two months since Good Samaritan established 20 temporary pallet homes in Isla Vista to provide relief to houseless residents beleaguered by the COVID-19 pandemic, the service provider has provided housing, job opportunities and basic needs support to 36 people. 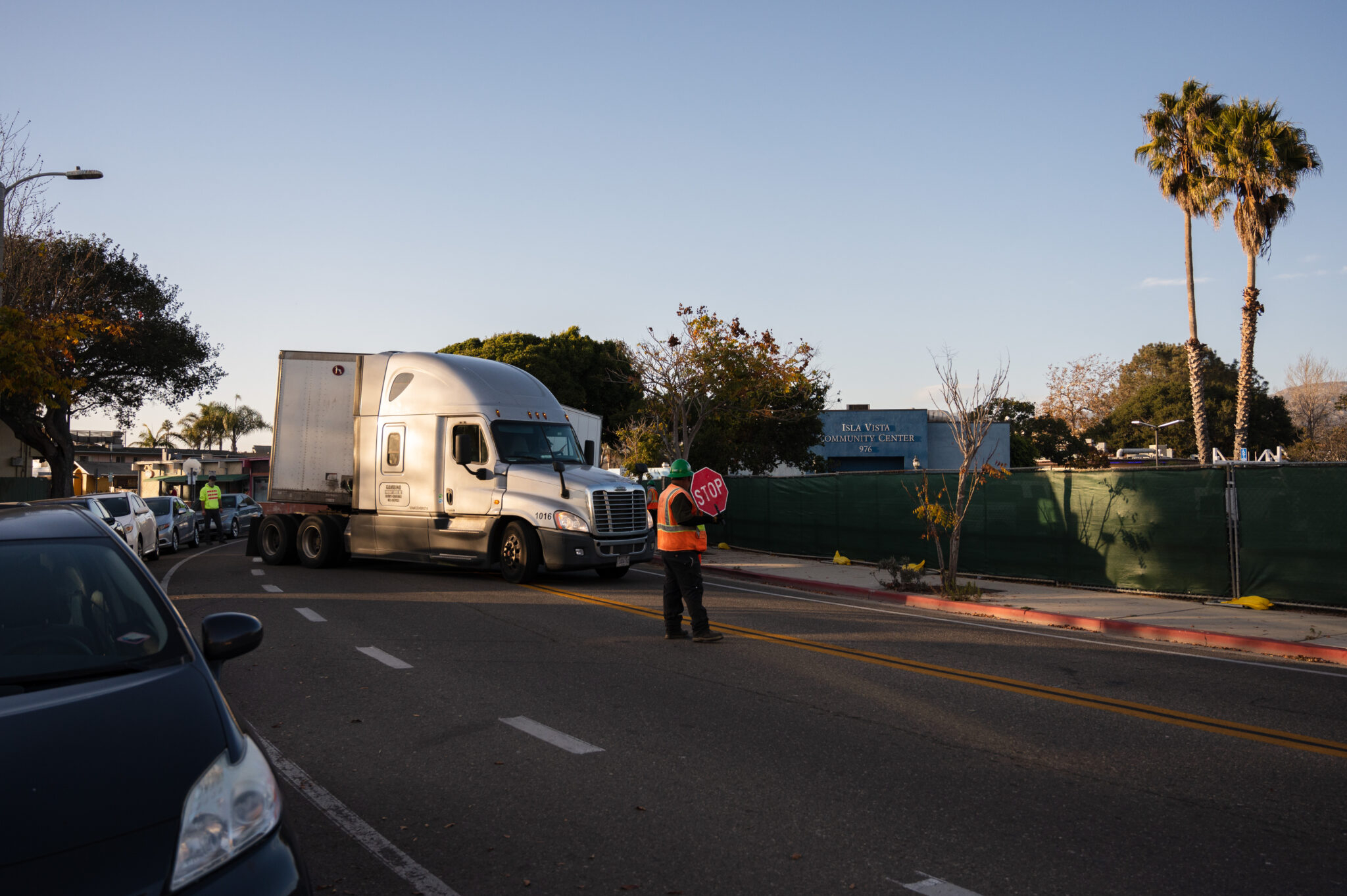 The pallet homes were installed in early December in the parking lot of the Isla Vista Community Center. Max Abrams / Daily Nexus

Installed in early December in the parking lot of the Isla Vista Community Center, the pallet homes — currently occupied by 26 people — will continue to provide shelter to houseless residents until June, according to Gina Fischer, district representative for SB County Third District Supervisor Joan Hartmann.

The service provider agency Good Samaritan bid on a contract in November 2020 from Santa Barbara County to operate and run the pallet home facilities with $900,000 in federal COVID-19 relief aid. Now, in partnership with the county, the I.V. Community Services District (I.V. CSD) and the I.V. Recreation & Park District (IVRPD), Good Samaritan is also providing counseling and other basic needs services to residents until its contract runs out in June.

Houseless clients are each provided with an 8-by-8 unit with heaters and power, along with on-site restrooms, showers and public health services, according to Kirsten Cahoon, who manages the pallet homes for Good Samaritan. Clients, who are only housed together if they had previously lived together, are provided with social services, substance abuse services, legal services, on-site medical care and can be seen by Doctors Without Walls for medical issues every other Friday.

By the time houseless residents leave the pallet houses, Fischer said the goal is “to stabilize their lives and get them housing ready,” which includes entering them into Santa Barbara’s Homeless Management Information System (HMIS), which would then allow them to receive available funding for housing, rental assistance and job search resources.

Around 90% of pallet home residents had no form of identification or social security cards upon arrival, Cahoon said, which made connecting them to benefits extremely difficult. This difficulty was only compounded by COVID-19-related closures of documentation offices, like the California Department of Motor Vehicles. Cahoon said that documentation cards have just now begun to arrive, two months after pallet home residents first moved in.

Cahoon said that although Good Samaritan’s main focus is the pallet homes, they also connect houseless individuals in Isla Vista who are not living in the pallet homes to other resources, like other temporary housing and job opportunities. Some are working towards rapid rehousing, while others have moved to treatment centers for substance abuse or safe housing for survivors of human trafficking, she said.

As clients move out, other houseless residents move up a waitlist and into the pallet homes. While a few people have been removed from the program after breaking Good Samaritan’s shelter rules — which include no drugs or alcohol on the premises — the majority of clients moved out to other housing, Cahoon said.

“Day to day, we’re providing case management; we’re providing supervision, job search assistance and assisting with housing, which is our biggest focus. Obviously our goal is to have everybody housed by our June deadline of having to be out of there,” Cahoon said.

“Five residents had deferred medical operations, because they had no safe place to return or to recover in. Now that they’re in the pallet village, they have successfully completed whatever those operations are,” Fischer said, explaining the benefits of the temporary homes.

The pallet village has not reported any positive COVID-19 cases, but tests are available to any clients who want one or begin to show symptoms. Residents’ temperatures are also taken whenever they enter the facility, according to Cahoon.

One resident of the pallet village, a local musician who identified himself as G, citing privacy concerns, said that he was thankful for the county’s support and his future placement in affordable housing, although he wished more could be done to control the buildup of trash and waste at People’s Park, where he still maintains a tent.

Last December, houseless residents at Anisq’Oyo’ Park unable to relocate elsewhere were relocated to People’s Park and the pallet homes, where they currently remain after houseless residents were forced to leave certain parks for having encampments that created fire hazards or violated IVRPD’s COVID-19 Encampment Management Policy.

“Some people are really trying, and we take the initiative and pick up the other [trash], but the riff raff still builds up,” G said, noting that his suggestion to hang trash bags on park fences had helped clear areas of trash.

While G said that his temporary housing in the pallet homes can remind him of a jail cell at times, the benefits outweigh the negatives.

“It’s shelter from the elements. I’m getting older now, so I can’t keep doing this here … There’s teams and organizations helping me to get placed in affordable housing now,” he said.

The decision to house residents in the pallet homes has not been without community controversy. One UC Santa Barbara student posted a petition to relocate the pallet homes outside of I.V. The petition, originally posted on the I.V. Free & For Sale Facebook page, garnered significant backlash before it was deleted.

“As a neighbor, a local leader and a supporter of [the pallet home] initiative, I recognize that every community is grappling with homelessness, and it’s important that every community is part of the solution to providing people with access to resources and services that can help get them housed, especially now, during COVID,” Ethan Bertrand, a director on the I.V. CSD Board of Directors, said.

“This is much safer than the alternative, which is to just have people living outside, living in parks, living on our streets, and through programs like this, people are able to be connected with resources, and with support, to ultimately create a long term housing plan,” he said.

Cahoon said she does not yet know what will happen to the pallet homes after Good Samaritan’s contract with the county runs out in June but reiterated that the pallet homes and programs like it can provide long-term successes for houseless residents.

“I’m not going to say it hasn’t been rocky and it wasn’t a rocky start,” Cahoon said. “Most of the folks that we’ve worked with are suffering with addiction, mental health issues and have a lot of barriers for them to be able to move forward. But this project is extremely successful because these folks are able to get the services that they want and that they need.”

“We’re providing basic needs,” she continued. “And once those are met, you can really start watching people change and watching people want to do better and want to change their lives.”

At $900K that’s $24K a head for six months. Probably cheaper to check them into the Betty Ford Clinic.