Isla Vista’s houseless population has increased nearly 50% in the past six months amidst a dearth of basic needs services brought by the COVID-19 pandemic, resulting in a new wave of long-term, houseless residents in the community, according to Spencer Brandt, board president of the Isla Vista Community Services District. 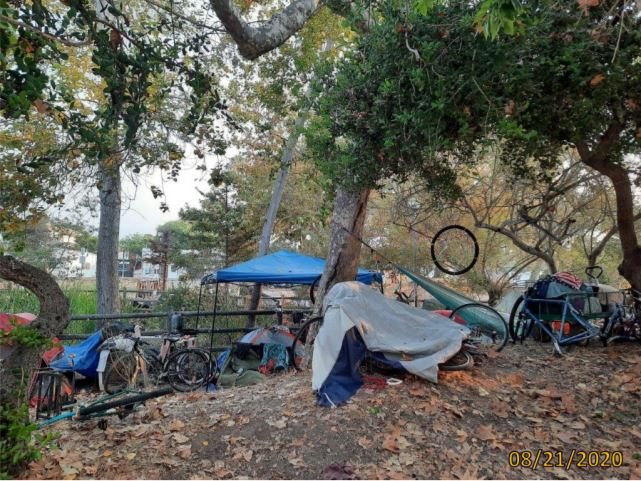 Some tents and encampments that were once temporary have sprawled into permanent living situations, leaving trash and unsanitary conditions to abound. Courtesy of IVRPD

As of the most recent survey in June, 113 people are experiencing houselessness in I.V., an increase of 44 individuals since January 2020, according to Third District Representative Gina Fischer.

“When I got here six months ago, there was myself, the teepee on the hill and the guy at the brown tent,” Laurie McGowan, a houseless resident living in Anisq’Oyo Park, said. “That was it.”

Now, McGowan can’t even use the park’s bathrooms, which she said are “over-taxed” from the influx of houseless individuals. Nor can she use the public faucets, which she said were shut off amidst the pandemic. But neither of those things worry her the most.

“My biggest concern is the spread of diseases,” she said. “We’re a small version of Skid Row.”

Recent guidance from the Centers for Disease Control and Prevention (CDC) advises local agencies to leave houseless encampments as they are to reduce the transmission of COVID-19. But Brandt said the directive alone is not enough to mitigate the effects of the virus.

“Because indoor facilities like libraries, community centers, and cooling facilities are closed right now due to the pandemic, homelessness is much more visible,” Brandt said in an email to the Nexus. “This experience is not unique to us in Isla Vista.”

In August, the Isla Vista Recreation and Park District (IVRPD) devised the COVID-19 Encampment Management Policy to address the areas most impacted by houselessness, including Anisq’Oyo Park, the Camino Corto Open Space and the Sueno Orchard.

“IVRPD must balance the needs of the homeless community in this challenging time with its state-mandated obligations to repair, maintain and operate public parklands and provide recreational, cultural and educational opportunities to its constituents,” the policy read.

“On occasion, this balance may require relocating or limiting the physical space occupied by individuals within the parks and ensuring that personal belongings and sleeping quarters do not exceed a reasonable footprint,” the policy continues.

Current houseless encampments within I.V. pose “numerous public health, safety and access issues,” according to the policy. From January to August, law enforcement calls for service, reports from concerned or aggrieved parties, and arrests of houseless individuals have all at least doubled, according to Fischer, up 61%, 50% and 78%, respectively.

McGowan believes many houseless individuals are migrating to I.V. through word of mouth, encouraged by the security of not having to move frequently and the presence of illicit substances.

As a result, McGowan said, some tents and encampments that were once temporary have sprawled into permanent living situations, leaving trash and unsanitary conditions to abound.

“Walk through the park and it was never like this. It’s disgusting, and they gotta do something about it,” according to Buck, a houseless individual who’s lived in I.V. for 12 years and only identified himself by his first name. “This place is out of control.”

Depending on the situation, local agencies can employ a number of intervention techniques to minimize safety and health concerns. This includes debris and garbage pick up, public health material provisions — such as personal protective equipment (PPE) — temporary encampment relocations and park closures, according to the policy.

“They were gonna have it where we tear down and go everyday. That means we’re walking around and mingling with everybody,” McGowan said. “That’s not gonna work.”

In light of the risks posed by dispersing and moving homeless encampments, some initiatives have instead taken a non-interventional approach.

The I.V. Encampment Working Group, which was formed in May and includes nearly a dozen partners such as Home For Good, Food Not Bombs, the Isla Vista Community Services District (I.V. CSD) and UC Santa Barbara, is working “to better understand the impacts of the growing encampment footprint in I.V., and to plan solutions to address the impacts while considering CDC guidance for encampment management,” according to the policy.

McGowan said she’s seen some outreach efforts from the I.V. Community Center and Food Not Bombs, mostly in the way of free meals. But for the most part, the outreach efforts she’s witnessed have been “sparse.”

“When I first got here, there was food at the community center,” she said. “Now there isn’t.”

On a county level, Santa Barbara has provided relief for houseless individuals through increased overnight parking spots in I.V., storage bins to keep belongings during park maintenance and housing for qualified individuals through Project Room Key, according to Fischer.

Leon, a friend of McGowan’s who only identified himself by his first name, said he spent over two months at a Best Western in Covina through Project Roomkey and recently received two COVID-19 tests free of charge. In coming back to I.V. to visit McGowan, Leon said he was shocked to see the growing numbers of homeless encampments.

Aside from the working group, over 10 local businesses and organizations have stepped in to provide PPE and temperature checks at no cost to all community members; participating members include the Pardall Center, the I.V. Food Co-op, I.V. Deli Mart and Caje, among others, Fischer said.

But what houseless individuals really need, according to McGowan, are more means for sanitation: bathrooms, showers and an ordinance to limit the amount of personal belongings one can have at an encampment.

“If you can’t travel with it, you ain’t supposed to have it,” Leon said. “Rule of the road.”

Though he agrees with McGowan, Buck said he’s unsure how such an ordinance could be enforced.

“The community service officer told us ‘Our hands are tied. We can’t do anything,’” Buck said, noting that the CDC’s guidance and the hesitancy among local agencies to disperse houseless encampments or enforce sanitation measures continues to let these issues manifest.

A general list of resources for people experiencing houselessness in I.V. can be found here.

within walking distance there are multiple empty dormitories at a publicly owned university that is not opening up for on-campus classes. step up UCSB–the encampments are an unhealthy mess and an embarrassment.

Camp Roberts is a better idea. There’s a lot of empty space there and all the resources to deal with a pandemic. UCSB has enough problems dealing with students. They need a way to reduce the density in IV, and the dorms are a necessary part of that.

How about yet another tax increase to take care of these lousy bums? California loves taxing the people who already pay the most taxes… but hey, we need to pay our fair share.

Why don’t we put them all up in suites at the Four Seasons? They clearly need five-star accommodations.