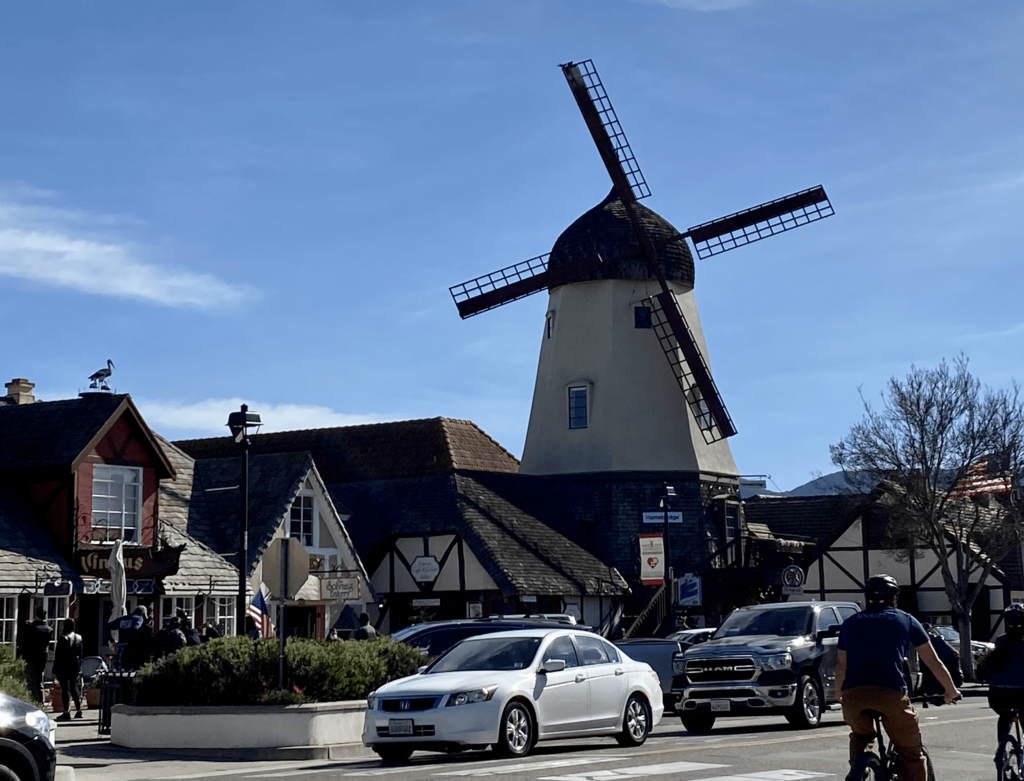 Over Presidents’ Day weekend, I travelled up to Solvang, CA to celebrate Valentine’s Day with my boyfriend and take a break from the hell better known as “midterm szn.” Only a 40-minute drive away from UC Santa Barbara, Solvang is a quaint village known for its Danish-style architecture and wide variety of mom-and-pop restaurants and shops, all within walking distance of each other.

In addition to getting sucked into buying a bunch of things I probably don’t need (i.e. clog magnets, Danish dough whisk, boot-shaped shot glass), I visited a decent amount of dining establishments, some better than others. Here’s a quick recap of my food adventure in Solvang! 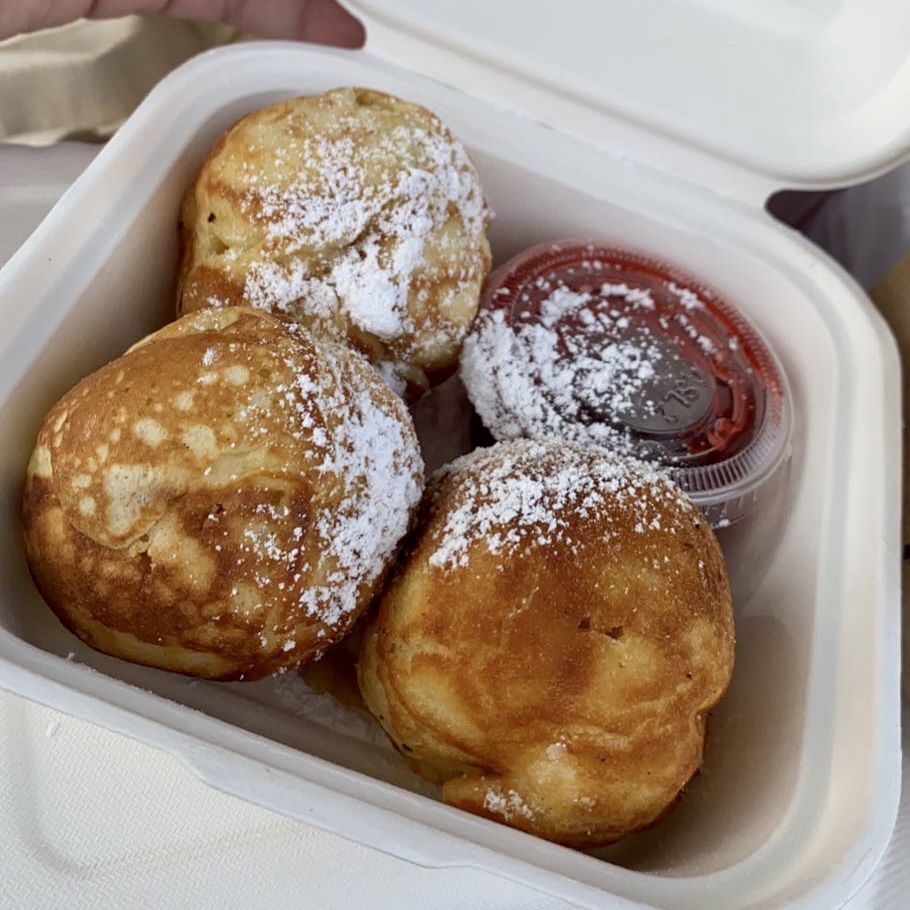 We got breakfast at Solvang Restaurant, a place that is famous for their aebleskivers, a traditional Danish snack that resembles a doughnut hole. My boyfriend and I shared one order of the aebleskivers (3 for $4.40), the California Eggs Benedict ($12.50) and the Danish Sausage Plate ($11.50).

The California Eggs Benedict consisted of two English muffins topped with a slice of tomato, a poached egg and hollandaise sauce; the dish also came with a side of sliced avocado and shredded hash browns. I thought it was a solid dish, the hollandaise sauce easily being one of the best I’ve ever tried in an eggs benedict.

However, the Danish Sausage Plate was a little lackluster. The plate came with two pieces of toast, two fried eggs, hash browns and, to our surprise, only one sausage. While there was nothing wrong with the dish from a flavor standpoint, it was disappointing to see that the star of the dish, the sausage, seemed almost like an afterthought.

After finishing our entrees, we moved on to the main reason we wanted to try this restaurant — the aebleskivers. Cooked in a special cast-iron mold, aebleskivers are essentially spheres of dough that are dusted with powdered sugar and served with a side of raspberry sauce. The dough was a lot denser than I thought it would be, having a pancake-like texture. The dough itself also didn’t have much flavor, serving instead as a vessel for the sweet-and-tangy raspberry sauce. Overall, the aebleskivers were pretty good, but I would definitely share an order with at least one other person because they were surprisingly very filling. 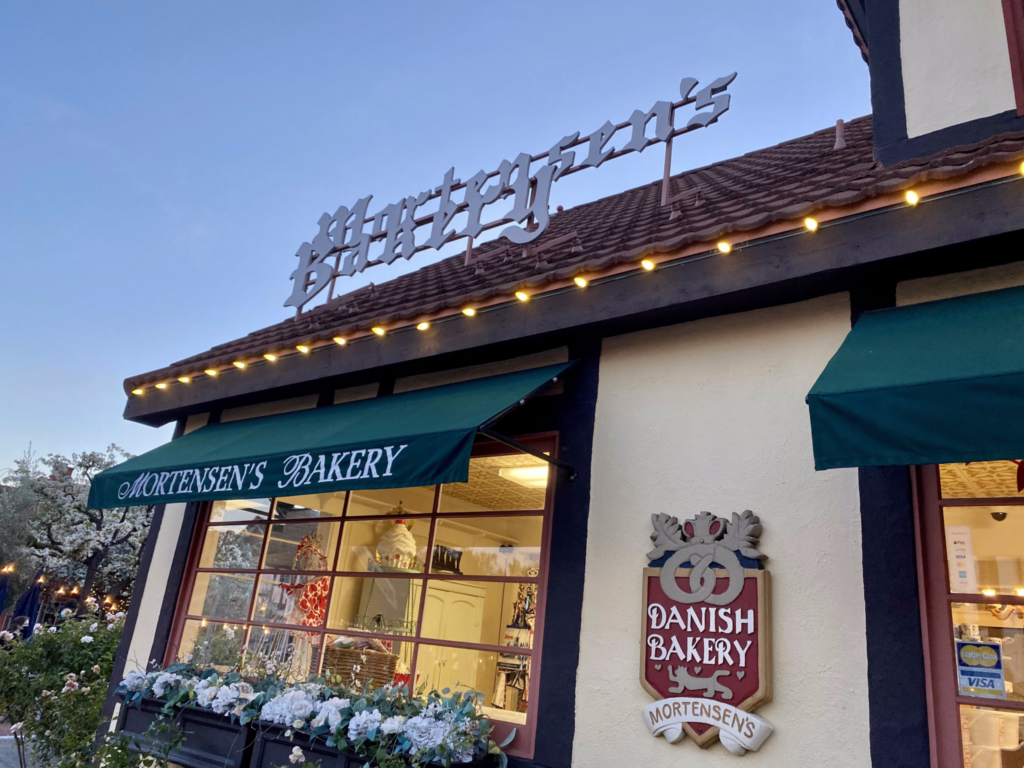 While walking and browsing different shops, I noticed a super long line of people waiting outside a place called Mortensen’s. Naturally, I thought that since there were a lot of people, the place had to be amazing. I made a mental note and came back around 12 p.m. when the line was shorter.

Walking into Mortensen’s, I was surprised by their wide range of pastries, some of the most notable being danishes in what seemed to be every possible flavor: eclairs, strudels, turnovers and Danish waffles. I ended up getting an apricot danish, raspberry danish, pistachio bar, apple turnover and Danish waffle. While most of the pastries were for family, I tried some of the raspberry danish and the Danish waffle, both of which were flaky, buttery and everything a pastry should be. The Danish waffle in particular, a long, sugar-coated pastry shell that’s piped with buttercream and raspberry jam, was especially memorable. However, I will say that it was pretty sweet, so if you’re not a fan of super sweet things, I would get something else. 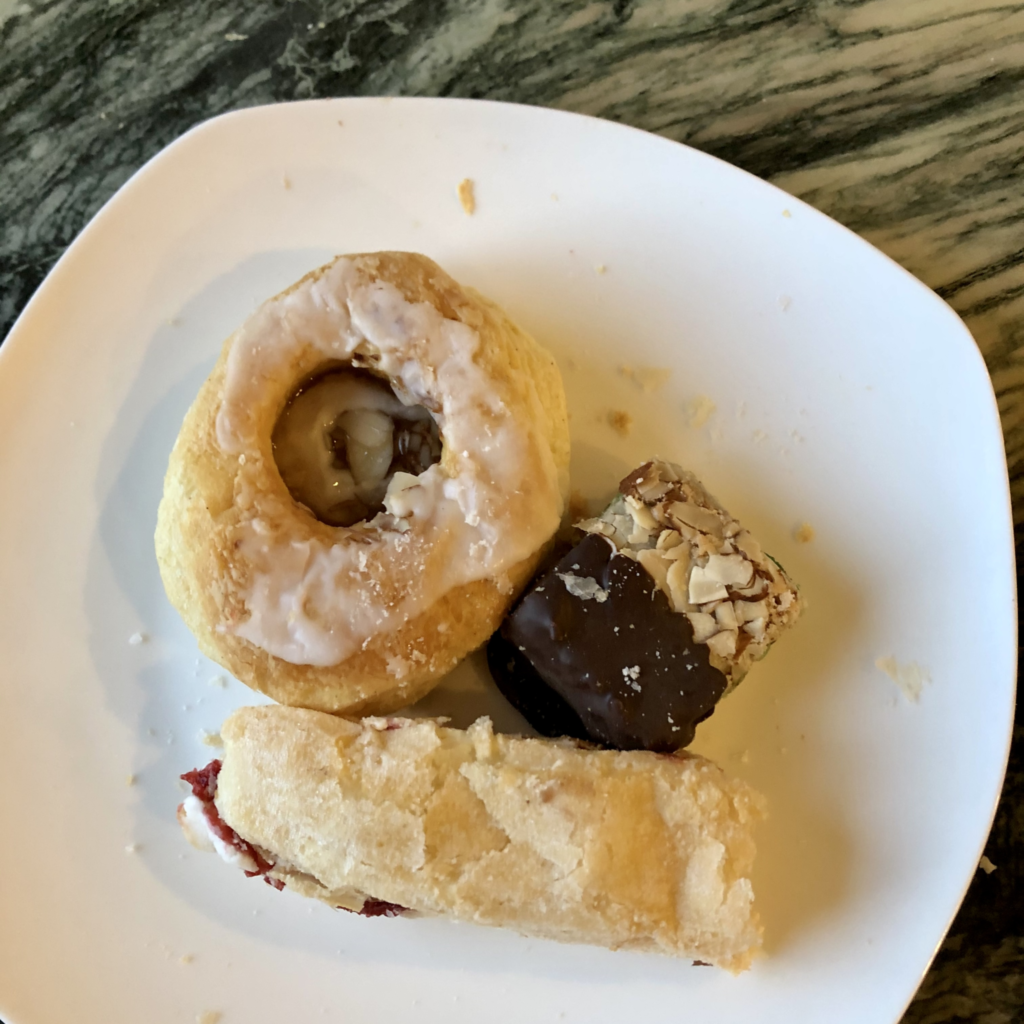 In short, Mortensen’s is definitely the go-to place for pastries. With such a large selection of desserts, you’re bound to find something that piques your taste buds.

After shopping around a bit more, we went to Succulent Cafe to grab a late lunch after seeing that it was one of the more highly rated restaurants on Yelp. The place was super busy, being that it was Valentine’s Day and Presidents’ Day weekend, so we opted to get takeout instead of doing outdoor dining.

I got the Spicy Fried Chicken Salad ($15), while my boyfriend got the Short Rib Hash n’ Eggs ($17), an option on their breakfast menu that was also available as part of their late brunch menu. The Spicy Fried Chicken Salad was described as a bed of mixed greens topped with a spicy fried chicken breast, dried cranberries, pepitas and biscuit garlic croutons, served with a side of buttermilk-ranch dressing. The menu made the dish sound amazing, so I was a bit shocked when I opened up my to-go box to find what looked like a reheated frozen chicken cutlet and stale croutons on top of a pile of lifeless greens. To give you a better idea of how bad the dish was, my favorite part of the salad was the dried cranberries.

I tried some of my boyfriend’s Short Rib Hash n’ Eggs though, and I was pleasantly surprised by how tender the meat was and how crispy the potatoes were. But a major caveat in the dish was that the poached eggs were overcooked, and what I expected to be golden, runny yolks instead took on a dry, chalky texture. 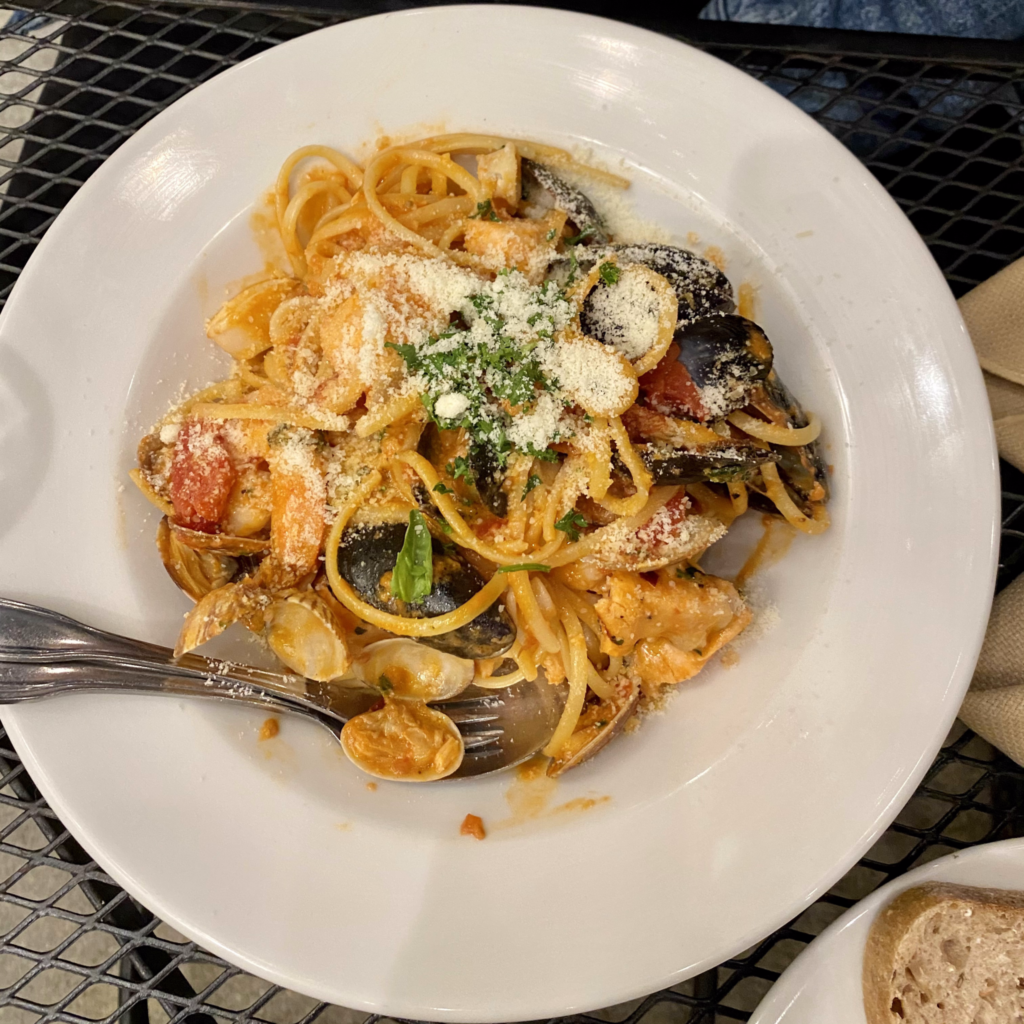 To end the day off, my boyfriend and I decided to go to Osteria Grappolo, a local Italian place. Failing to make a reservation earlier in the day, we walked over to the restaurant at around 6 p.m. to place our name on the walk-in list. The hostess told us that it would be an hour-and-a-half to two-hour wait, which we begrudgingly agreed to, since the other restaurants in the area looked just as busy, and nothing sounded better at the time than a steamy bowl of buttery carbs. We ended up having to wait almost two-and-a-half hours to get seated.

Once seated, we ordered almost immediately. We ordered the Spaghetti Carbonara ($20), spaghetti pasta coated in a parmesan and egg-yolk based sauce and speckled with bits of pancetta, and the Linguine al Pesce ($25), linguine pasta topped with shrimp, salmon, calamari, clams and mussels stewed in tomato sauce.

While we were waiting for our entrees, the waiter brought out a complimentary basket of bread. Even though I’m a sucker for free food, I couldn’t bring myself to eat more than one bite of the bread because it was so cold and stale. It became even harder to eat the bread when we poured out a bit of olive oil to dip the bread into and were greeted by a dead fly (or mosquito?) that was trapped inside the oil bottle. Management immediately brought over a new bottle of oil and balsamic vinegar, but at that point, the damage had already been done. 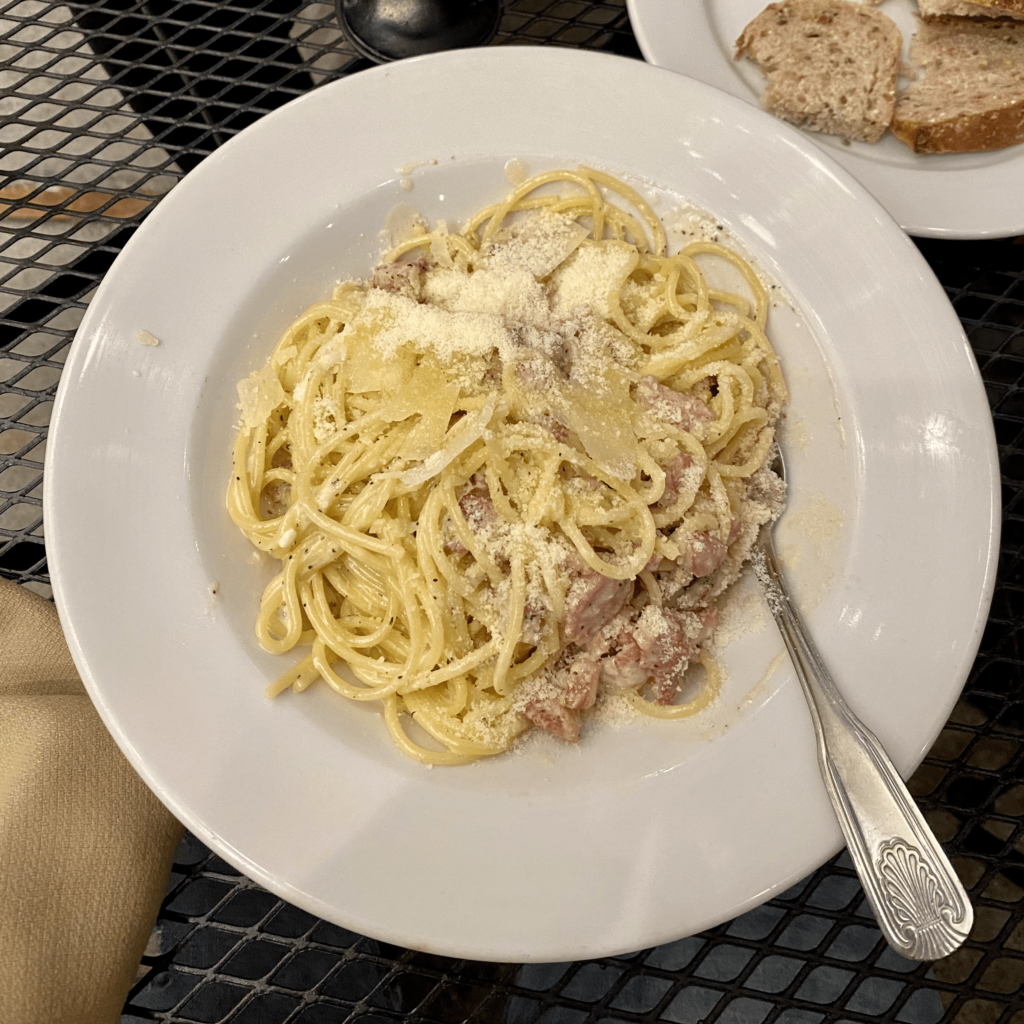 As my expectations for the place were dangerously waning, the pastas came out and pulled the ultimate Uno reverse card. The carbonara was rich and creamy, the fried bits of pancetta giving off the perfect amount of saltiness. On the other hand, the Linguine al Pesce was a fresher take on pasta, the bright tomato sauce being perfectly complemented by the brininess of the seafood.

Although I will never wait over two hours for a meal again, this place is worth checking out if you’re in the area and are craving some good Italian food — just make sure to make a reservation ahead of time and check the oil and vinegar bottles for any uninvited guests.

Needless to say, by the end of the day I was completely stuffed. The restaurants I mentioned are just a handful of food establishments located throughout the town. While walking around, I noticed a plethora of other restaurants, from a pho place, to a taco bar, to artisanal grilled cheese stands. If you ever want to go on a quick food adventure, Solvang is the place to go!

Michelle Lee
Michelle Lee (she/her/hers) is one of the Co-Editors for On the Menu for the 2021-2022 school year. She is an avid sourdough bread enthusiast and loves a good tote bag.