The Daily Nexus
Sign of the Times
Pandemic-Era Rule Changes Should Usher in a New Era for Awards Shows
March 1, 2021 at 11:57 am by Katie Caracciolo 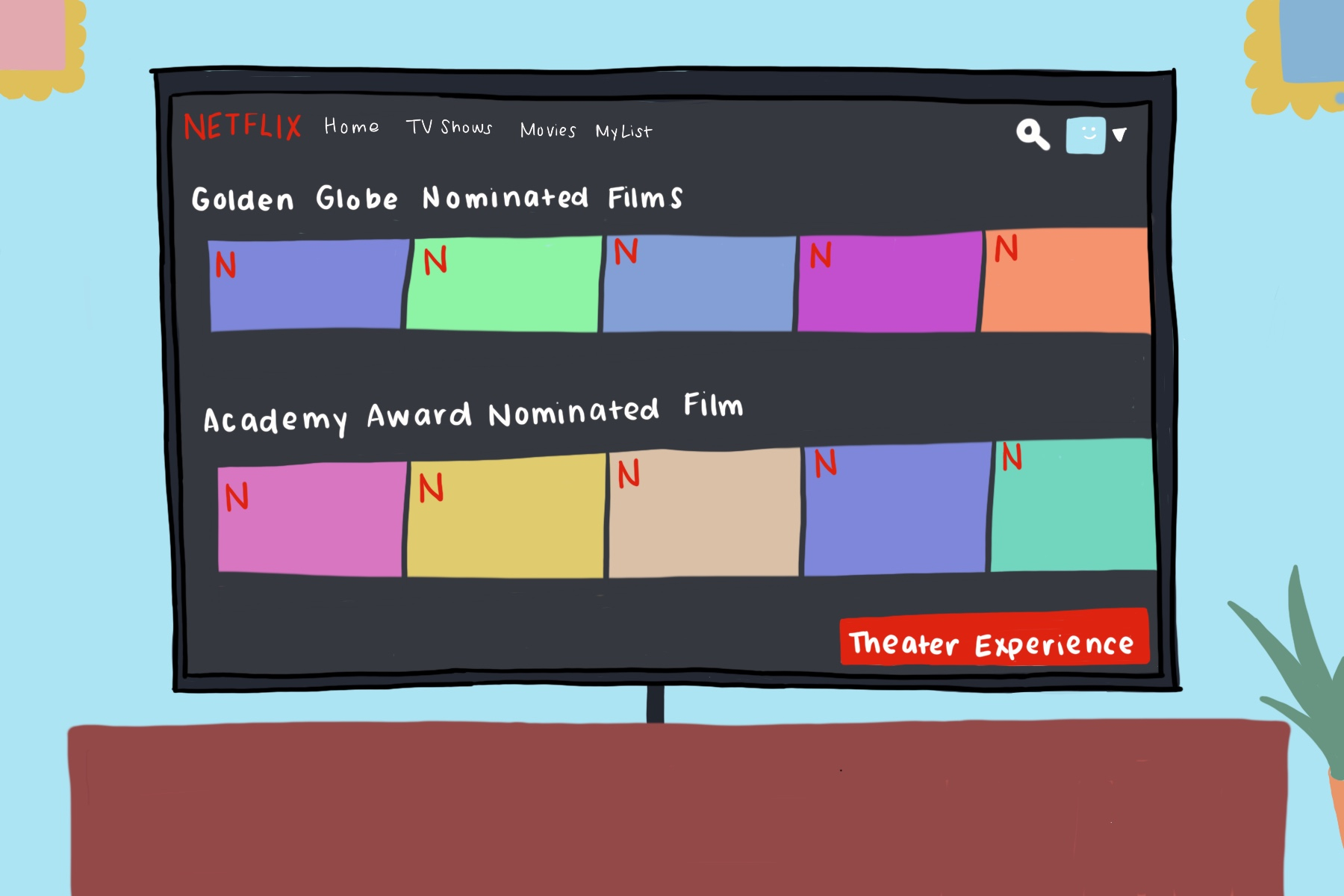 Against all odds, it is once again awards season. Unsurprisingly, this year’s ceremonies will look a little different, with now year-old bans on large gatherings still in effect across the country. Both the Golden Globes and the Academy Awards delayed their programs, with organizers continuing to navigate how to hold an awards show in the middle of a pandemic. Below all these surface-level obstacles is one interesting factoid: widespread theater closures forced the voting boards to make some significant rule modifications.

For 2021, both the Hollywood Foreign Press Association (HFPA) and the Academy of Motion Picture Arts and Sciences, the voting boards for the Golden Globes and the Academy Awards, respectively, have waived their usual requirement of “[films opening] in theaters and [running] for at least a week in both New York and LA to be eligible” for an award. This means that as long as films released in 2020 had initially been slated for a theatrical release, they are eligible for awards show recognition, even if they never actually made it to the big screen.

While only a temporary modification, this rule could (and should) harken in a new phase of streaming platforms’ rising domination of the film industry, as well as challenge which movies are typically regarded as “Oscar-worthy.” The HFPA and the Academy should consider making this rule change permanent.

Typically, in order to meet the outdated theatrical release requirement, films produced by streaming companies have a perfunctory limited theater release before a wider release on their respective streaming services. Take, for example, 2019’s critically acclaimed, Best Picture-nominated, age-bending Scorsese feature “The Irishman.” Before premiering virtually on Netflix, the film raked in a (mere) $7 million in the box office, falling far short of making up for its budget of something between $100 million and $200 million.

This apparent box office blunder, however, means little to nothing in the era of Netflix. According to the streaming giant, “‘The Irishman’ … was watched by more than 26 million accounts globally within its first seven days on Netflix.” It is apparent that given the opportunity, audiences prefer a cinematic experience from their own couches — particularly with ambitious, creative films with 3.5-hour runtimes.

This trend of streaming domination holds true for 2020 as well, with Netflix release “Mank” raking in six nominations at the Golden Globes, the most of any single film for this awards cycle. Clearly, awards recognition for streaming-owned titles is more than just a trend. These films have proven that a widespread theatrical release is unnecessary to generate the proper “buzz” to garner the attention of the HFPA and the Academy. If movies like “The Irishman” or 2020’s “Mank” can find such great success through streaming platforms alone, why bother with a symbolic theatrical release?

Not only would permanently waiving the theatrical release requirement reinforce the already growing popularity of films produced by and released on streaming platforms, but it would also allow for recognition of innovative, exciting, direct-to-streaming films that ordinarily do not qualify. Take, for example, Academy Award winner Bong Joon-ho’s 2017 film “Okja,” a film I personally find much more entertaining than both “Mank” and “The Irishman.”

While I don’t pray for the death of movie theaters, awards shows need to modernize and diversify their expectations for award-winning cinema.

Though festival audiences booed the Netflix logo at the film’s premiere, the movie quickly garnered critical acclaim upon its wider release, with a Rotten Tomatoes score that was merely six points lower than the score for that year’s Academy Award for Best Picture winner, “The Shape of Water.” However, “Okja,” like all other direct-to-streaming, non-theatrical releases, was ineligible for recognition at both the Golden Globes and the Academy Awards. Both awards shows’ archaic theatrical release requirements prevent them from celebrating the true heights and possibilities of modern filmmaking, which is a system no longer defined merely by box office numbers.

If permanently waiving the theatrical release requirement keeps the playing field more level, allowing the Academy and the HFPA to more consistently recognize the actual best films of the year (instead of those with the best-funded awards campaigns), then I say it is well worth it.

Today’s “streaming wars” harken back to the cable wars of the early 2000s, with countless subscriptions flooding my bank statement every month. Some (including myself) lament the high price of three or four or five streaming subscriptions, but it’s still cheaper than buying 10 separate movie tickets to see all the Best Picture nominees in theaters. Many consumers seem to agree with me, and as of 2019, “Nearly half — 46% — of all broadband homes have multiple OTT subscriptions, the study found, up from 33% in 2017 and 20% in 2014.”

With their massive success, streaming platforms have moved from simply distributing priorly made content (in effect operating as conduits for our favorite reruns of “The Office” that many miss by not having cable TV) to becoming ambitious media creators in and of themselves. Netflix alone released 371 original TV shows and movies in 2019, a figure that dwarfs the output of the entire television industry in 2005. Streamers are only gaining power and ramping up output, and eventually, the voting boards will have no choice but to abide.

Of course, the permanence of such a rule change could spell disaster for movie theaters, an industry already in deep danger thanks to longtime consumer trends as well as the COVID-19 pandemic. Nothing beats watching a movie in a crowded, local theater with plenty of overpriced popcorn and candy on which to munch. Truly some of my fondest memories take place in a packed theater seeing blockbuster hits like “Get Out” and “Venom,” or even “Cats” (2019). I do not believe that film audiences will ever stop going to theaters altogether (pandemic notwithstanding). But if that’s not the primary way people watch movies anymore, why should awards shows require it?

While I don’t pray for the death of movie theaters, awards shows need to modernize and diversify their expectations for award-winning cinema (in more ways than one, but that’s a topic for another article). By permanently banishing the theatrical release requirement, the HFPA and Academy can help bring their ceremonies into the 21st century.

Katie Caracciolo will be viewing all 2020 awards show nominees from the comfort of their own leopard printed couch.