The Santa Barbara County Sheriff’s Office arrested two suspects Thursday morning in direct connection with the Jan. 7 double homicide on Burtis Street near Goleta, Sheriff Bill Brown announced at a press conference on Thursday afternoon. Two unrelated arrests were also made as a result of the investigation. 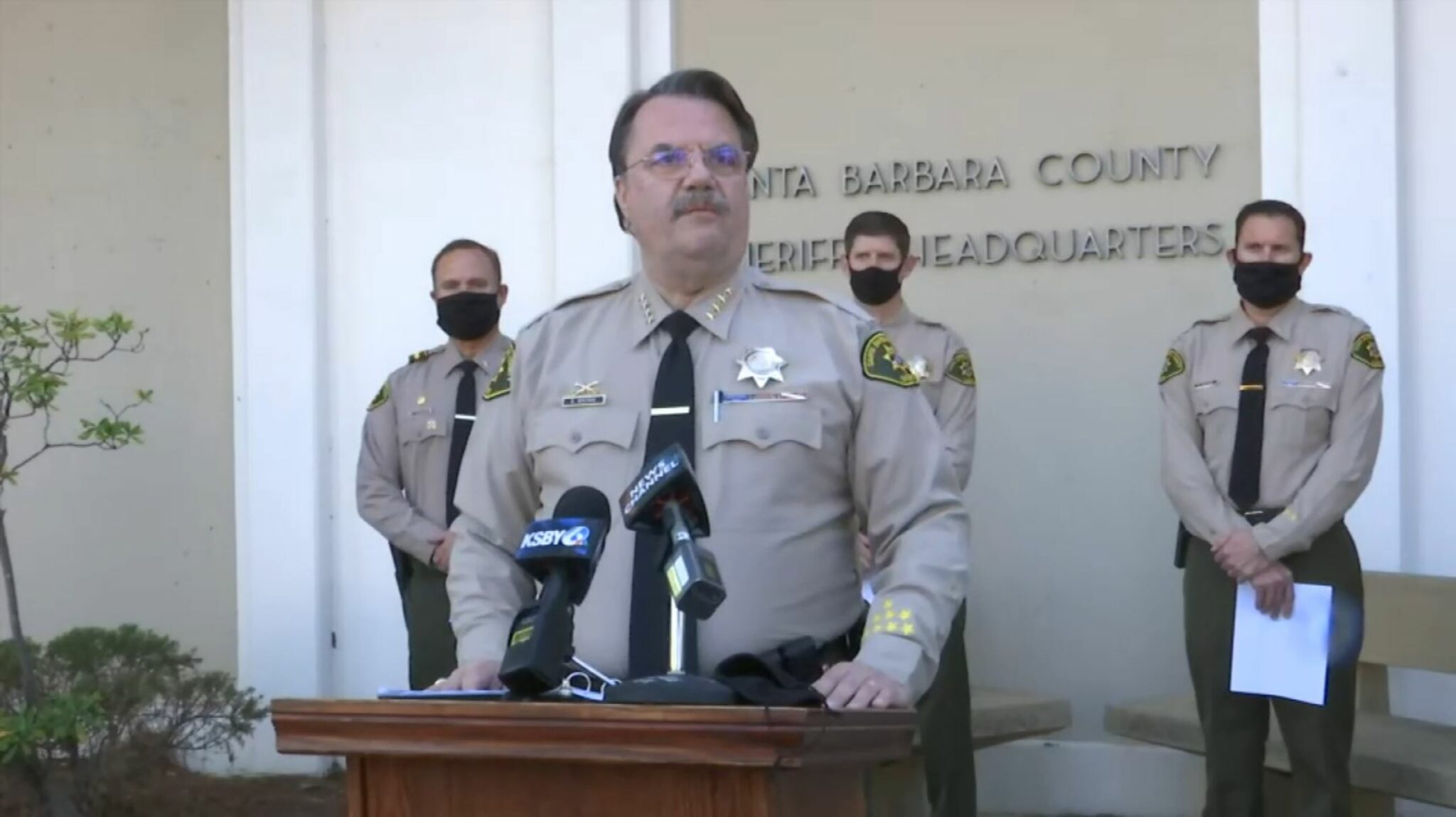 Brown said during the press conference that the case is still under investigation and that he hopes to provide further developments at a later date. Courtesy of KEYT

The arrests, a product of four separate search warrants executed in the City of Santa Barbara this morning, include 21-year-old Bryan Munoz, 24-year-old Joshua Isaac Vega, 32-year-old Jorge Luiz Silva Guevara and a 15-year-old juvenile, Brown said, all of whom are affiliated with an undisclosed criminal street gang.

Guevara was arrested for possession of narcotics for sales and the 15-year-old juvenile was arrested on an outstanding warrant following a probation violation, Brown continued.

Brown described the double homicide as a “robbery ripoff,” in which the two 19-year-old victims, Santa Barbara City College student Enzo Marino Rastelli and UC Santa Barbara student Jasper Pieter van der Meulen, planned to sell at least half a pound of marijuana to the suspects but were robbed instead.

Rastelli was pronounced dead at the scene while van der Meulen was taken to the hospital in critical condition, where he passed away on Jan. 29.

Brown said during the press conference that the case is still under investigation and that he hopes to provide further developments at a later date.

All should be sentenced to life in prison without parole.

Sad to say the least & a pathetic waste at the worst. The thing that sticks out about this case is what the 2 kids that got shot were tying to sell was pot, which is now totally legal. Then there’s the quantity of pot, a 1/2 pound, not a whole pound. Why? Gauging from their social media pages, those 2 kids that got shot, from affluent, well to do families, they were going to decent schools, one drove a nice car, not many things lacking. Want to know what else wasn’t lacking? A penchant for the thug life. They… Read more »

I’d apportion the dominant share of guilt to the gangbangers, but no small portion to the unwise college students, and both indeed from media glorification of crime, from Jesse James through “The Godfather” and the current gang culture (about version 20 counting from at least the Dead Rabbits from the 1840’s). Crime glorification is a form of pornography, and actually corrodes our society and squanders ferocious resources.

That is an interesting way to put it. The murderous gang members, definitely deserve the “dominant share of the guilt” and that is truth. As for the “no small portion” to the murder victims, also truth to that as well. But yes, that glorification of the thug life through media and art, it definitely gets a dominant share and no small portion in this matter. The thug life thing, it’s been going on in IV for some time and if you listen to the music being played, you’ll know why. Sorry, but dropping the “N” word every other verse, referring… Read more »

Play stupid games, win a bullet for a stupid prizes. They were doing illegal stuff and likely would have graduated to more illegal stuff and never faced any real consequences because we all know they live by different rules thanks to their color. I’m not sad one bit. Parents should have taught them better.

wtf, harsh words, but true words & I totally 100% agree w/ you. The ONLY thing I kind of disagree on is the color thing. The only color mattering here would be green & that color goes good w/ ANY skin tone.
But yeah, these guys, they would’ve graduated to a higher echelon of the thug life experience over time.
Did you hear the dad or mom of 1 of them started a gofundme for handgun violence awareness? Why don’t they start a gofundme for clueless parents of thug life punks who are on the road to ruin? More effective.

Agree that these two who died were stupid. I have no idea if their parents are to blame or not… I know of plenty of cases where great parenting led to criminal kids, and also vice versa… kids who should have ended up in the penitentiary turned out fantastic.

This can be debated on many levels, but I do get your point. I saw the social media pages for these two and it was suspect to say the least. From those pages, they also had contact with their parents, therefore the parents could see what they were posting an such. Now comes the questions of “why did the parents let this kind of thing slide?” Sure, they were grown young men, but there comes a point where a parent (or parents) need to step up and say something. Why that wasn’t done, who knows, but we’ve seen the aftermath… Read more »

I remember Bruce Springsteen’s spoken word intro to … “The River”? About how he quarreled with his conservative father, who thought that the military was the appropriate place for 18-year-olds… but ultimately when Springsteen fooled the medical examiner at the draft board and came home, his father, who had fought with him for acting like a hippie, said “good”. Everyone’s views migrate. Young people adopt the “look” and mannerisms of rebels. Jeez, we had a horrible criminal named “Jesse James Hollywood” around here… but somehow there is a line that can get crossed, and young people will cross it just… Read more »

Again, agreed. But when the mainstream entertainment glorifies and exalts bad behavior, well, you’ll get more wannabe thugs and when they find themselves face to face with real thugs, well, you got Enzo and Jasper all over again.
Interesting you mention the Jesse James Hollywood case which led to the murder of Nicholas Markowitz. A friend of mine and I were just talking about that today and all that led to it.
A truly sad case and as always, nobody won with that one. Another waste.