The Daily Nexus
Sign of the Times
A Case for Nuclear Power
February 2, 2021 at 9:00 am by Nathan Lee 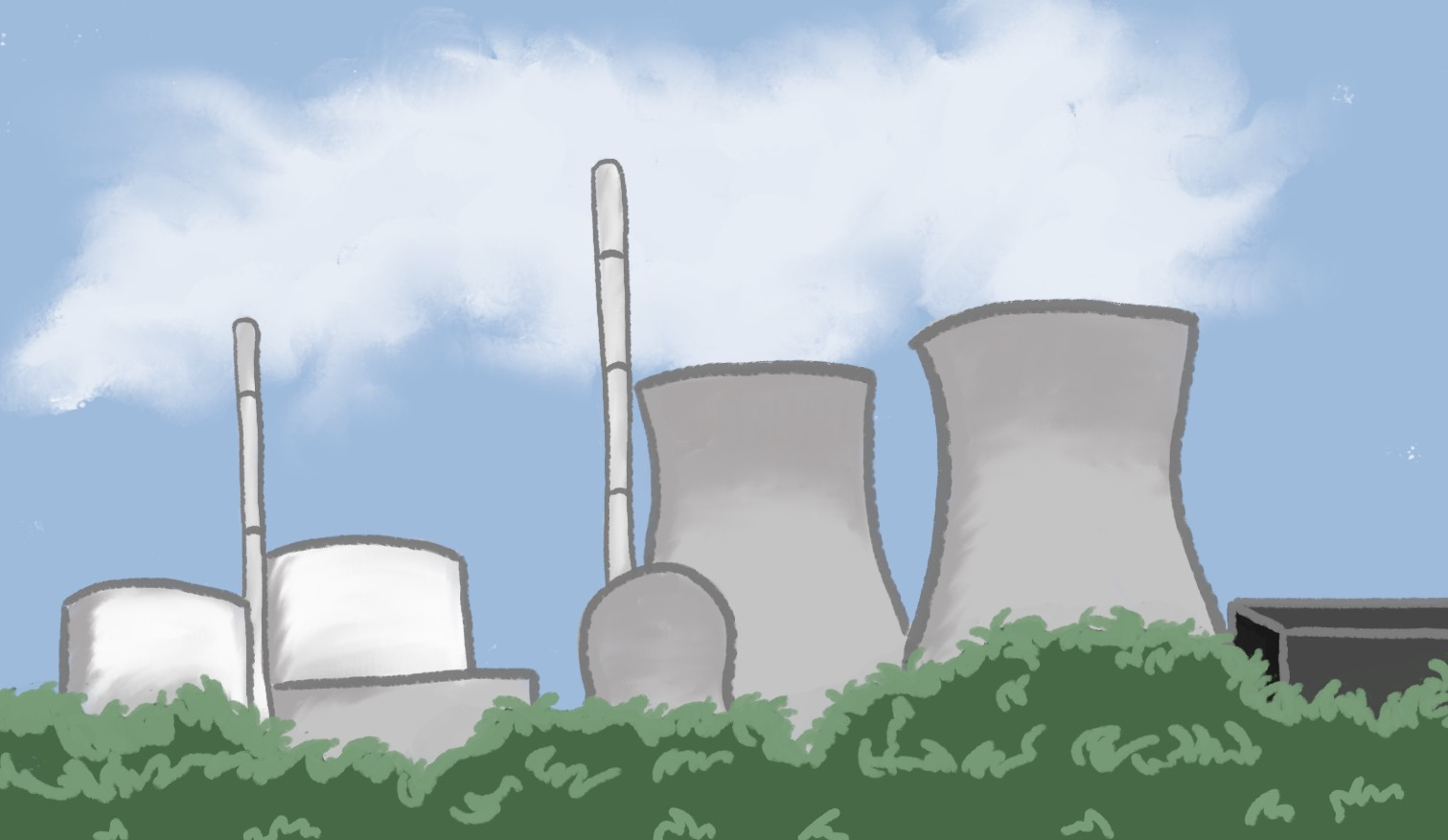 Climate change is at least in part caused by human activity, most noticeably by the burning of fossil fuels. We need to reduce our carbon emissions as soon as possible or there will be unbearable consequences such as extreme weather, drought and other natural disasters. The most relevant and perhaps the most attention-getting solution in the U.S. about what to do with climate change is the Green New Deal. It calls for the elimination of fossil fuel use to generate clean electricity by 2030 and a complete decarbonization by 2050. While I believe that the U.S. needs to quickly transition away from fossil fuels and toward greener energy, I think the currently proposed method is on the wrong path to achieve decarbonization.

Phasing out of fossil fuels entirely and replacing them with energy sources such as wind and solar would require many huge sacrifices from the American people — including high  costs and environmental impacts such as non-recyclable waste and animal killing — and has very little chance of being implemented.

Using nuclear energy to aid in decarbonization is a much cleaner and more efficient option, one that already has a reliable record across the developed world like in France where they generate 70% of the energy from nuclear. Nuclear energy currently makes up about 20% of our grid, which is more than that of all carbon-neutral energies combined. The transition from a fossil fuel-based grid to a nuclear-powered one supported by other renewables would greatly reduce our carbon emission faster and more completely than a system built just around renewable energy would.

The biggest misconception about nuclear energy is that it is incredibly dangerous. Contrary to the typical imagery of a highly dangerous energy source that could explode at any time, it is the safest energy source in the world. Nuclear energy has the lowest mortality rate among any energy source. This irrational fear of nuclear energy may be due to a false correlation between a nuclear power plant and a nuclear bomb. This is simply irrational when broken down. Nuclear energy has caused “more than 330 times fewer deaths than coal; 250 times less than oil; and 38 times fewer than natural gas.” In fact, despite producing less than five times the world’s energy source, more people died from falling off roofs installing solar panels than the entire history of nuclear power, and that is counting major accidents like Chernobyl and Fukushima.

In the United States, there has never been anyone that has been killed by a commercial nuclear power plant. We take extra care in the design of our reactors to avoid another catastrophe like Chernoby and avoid building them in places that are at risk for natural disasters, to avoid cases like Japan.

The only notable nuclear accident in United States history was the partial meltdown of Three Mile Island’s reactor number 2. Despite all the fear and attention that the press and activist groups put on the accident, according to the nuclear regulatory commission, about 2 million people were estimated to have received an average radiation dose of only about 1 millirem above the usual background dose. The maximum radiation that a person received due to this meltdown was less than 100 millirem. To put this in context, a CT scan that people get when they have a broken or fractured bone exposes them to about 200-3000 millirem of radiation.

Another potential fear that people may have about nuclear plants is that the radiation emitted on a daily basis might cause cancer. But this fear is also equally irrational.  If we look at the facts, eating a banana exposes you to 11 times more radiation than living near a nuclear power plant for a year. It’s true that radiation can cause cancer, but the dosage of the radiation matters, and it is a high bar to reach. Just like my friend Owen who studies chemistry once said: “Any discussion about toxicity without discussing the dosage is not a serious conversation.” Any discussion about the threat of radiation without putting it into context is also not a serious conversation.

These irrational fears surrounding the safety of nuclear energy bears real consequences. When Vermont closed its Yankee Nuclear Power Station due to protests that appealed to an “environmentally friendly” legislature, the state saw a 650,000-metric ton increase in carbon emissions within just two months. This was a nuclear plant that never had a single accident, but after the Three Mile Island accident, construction of new nuclear plants was halted for 30 years.

Think of all the plants we could have built and how much carbon dioxide we could have eliminated if there was not an irrational outcry against nuclear energy. Worldwide, about 60 gigaton of CO2 emissions have been avoided due to nuclear power plants and it would probably be much more if we are not experiencing a global witch hunt for nuclear power. If we are serious about fighting climate change, politicians shouldn’t abandon the greatest tool we have.

But why is nuclear energy so much better than other renewable sources, such as wind or solar? First, let’s talk about the cost. When people talk about how cheap renewable energies are, it often disregards the insane inequality in subsidies that renewables get from the federal government. Despite providing less than 85% of the energy that nuclear power plants provide, renewables receive 59 times more tax-related subsidies via tax credit and direct subsidies and have more than twice the amount in research grants than that given to nuclear power.

When comparing the cost of electricity generated by wind and solar power versus nuclear power, considering all factors — estimated years of service, cost of materials, production capacity — nuclear power is far cheaper than solar and wind power per kilowatt-hour (kWh) in countries like the U.K., China and Canada, where energy policy remains relatively neutral. In fact, statistics show a positive correlation between higher electricity prices and higher per-capita energy generated by wind and solar.

But even in the U.S., where policies are rigged against nuclear energy, it remains cheaper due to its constant availability. Nuclear power plants can operate and generate electricity non-stop 24/7 (93.5% of the time). Meaning that they can flexibly adjust the power output by energy demand peaks and send the electricity straight through the grid. Other renewables like solar and wind cannot operate 24/7 because they depend on factors that are not constant to produce energy. Solar only generates energy when sunlight is strong enough (24.5% of the time) and wind only generates energy when the wind is strong enough (34.8% of the time).

If one day renewables like wind and solar are really the major players in energy production, the energy has to be stored in batteries so it can supply power even when the sun doesn’t shine and the wind doesn’t blow, which in turn is expensive. According to a Stanford research, when factoring in all the ancillary costs, solar energy is twice as expensive as nuclear energy. The same can be said for renewables like wind power that function similarly.

These renewable energy sources also come with some pretty hefty environmental consequences.  Solar panels create 200 – 300 times more hazardous waste than nuclear power when generating the same amount of energy, for example. Wind-powered turbines require on average 11 times more materials to build than nuclear plants per energy unit generated, plus the turbine blade cannot be recycled. By 2050, the world will have about 43 million tons of waste in wind blades if the trend to push for wind continues. However, nuclear waste can be recycled, as modeled already by several developed countries. But even in the U.S. where waste isn’t recycled, all the waste generated by the U.S. nuclear industry since its beginning can fit in a football field.

Wind and solar also harm wildlife since they need so much space; they could occupy and eliminate animal habitat as well as kill animals like birds, bats and insects via collision from wind and incineration by solar. Studies have also predicted irreversible damage to ocean biodiversity from deep-sea mining for rare earth materials to produce the batteries used to store electricity.

Don’t get me wrong, renewables will have their place in the economy, such as hydroelectric power which is already a reliable and cheap member of the U.S. grid. However, renewables like solar and wind would have to get much cleaner to prove themselves superior to nuclear. We shouldn’t push them forward right now as the savior of the earth when we already have a reliable, plentiful and mature energy source in nuclear power.

Nathan Lee believes that change needs to be based on reality, not wishful thinking

Excellent article that I hope finds a wide readership including the UC Regents. Nuclear power is the only way to seriously address CO2 emissions and the eventual exhaustion of finite fossil resources. Shutting down California’s Diablo Canyon nuclear power plant will erase most of the carbon dioxide reductions made in the state. While we sit on our hands Russia and China are capturing the hundred billion dollar global market in nuclear power technology and selling nuclear power facilities around the world. It is only a matter of time until the US becomes a customer. It would be far smarter to… Read more »

What a good article! Thank you for sharing your serious facts. I didn’t know about those comparisons. Now, I think nuclear energy could be one of the most important solutions for climate change.