The Daily Nexus
Sign of the Times
Hold Big Tech Responsible for Capitol Hill
January 18, 2021 at 9:00 am by Kristen Wu 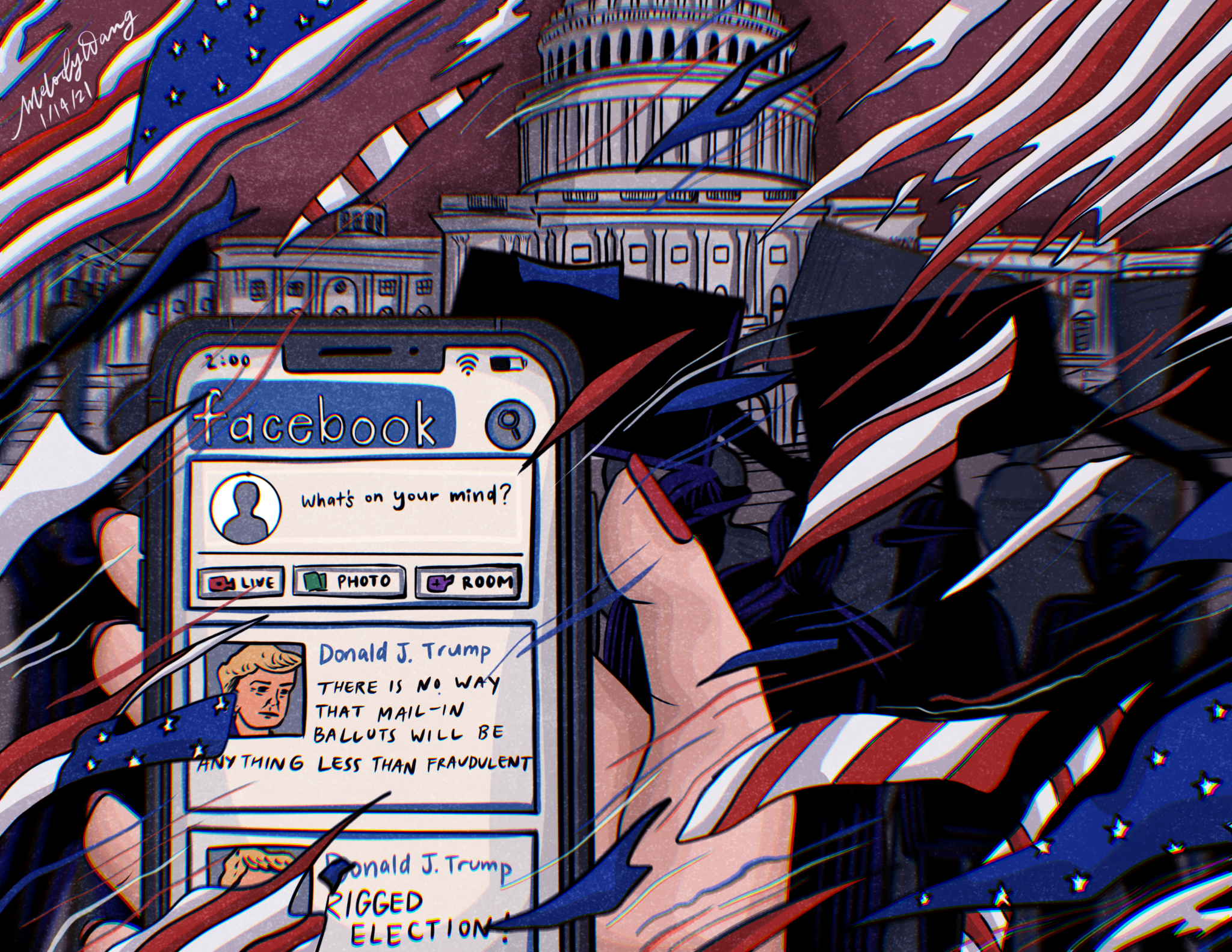 Over the course of his presidency, Donald Trump’s go-to method of communicating with the nation has been through Twitter. During the storming of the Capitol on Jan. 6, 2021, Trump proved faithful to the platform when he released a series of Tweets feebly urging his supporters to return home while simultaneously spewing the same false claims about a fraudulent election that inspired the act in the first place.

Two days later, he was permanently banned from Twitter. Multiple platforms and apps have since followed suit in either banning or restricting Trump, including tech heavyweights like Facebook, YouTube and Google. While their decisions have been widely lauded, is what we’re seeing a condemnation of Trump or merely big tech scrambling to save their own skins?

Facebook notoriously exempts political ads from their fact-checking policy. Additionally, after buckling under allegations of bias against conservatives, Facebook went on to loosen misinformation restrictions on far-right groups and users. When election season rolled around and Trump began his baseless assault on mail-in-ballots via Facebook, they merely slapped a sticker on his posts stating: “Visit the Voting Information Center for election resources and official updates” and called it a day. No restrictions, no warnings — not even an indication that this information was untrue.

After swift backlash from journalists, media and their own users, they changed the tag to read: “Learn how voting by mail is safe and secure.” In a weak attempt to appease both sides, they chose to contradict his claims instead of outright condemning them. But by not removing his posts, they not only allowed but aided in the spread of misinformation and false claims toward the legitimacy of mail-in-ballots, setting the stage for nationwide outrage at the election results.

Make no mistake — what happened on Capitol Hill was a domestic terrorist attack and a result of decades of online radicalization due to highly inadequate vetting on hugely influential social media sites.

Twitter took a similar approach in navigating Trump’s online outbursts: Instead of taking down any of his tweets incorrectly stoking mistrust of mail-in-ballots, they simply flagged the information as inaccurate. During the nationwide George Floyd protests, Trump encouraged violence against demonstrators by tweeting “when the looting starts, the shooting starts.” Even though his tweets were a direct violation of Twitter’s policies, the tweet was nevertheless kept up due to what Twitter claimed was “the public’s best interest.”

The storming of the Capitol wasn’t meant to be a surprise; it had been in the works for weeks. As early as Dec. 19, Trump tweeted about a “big protest in D.C. on January 6th,” further encouraging his supporters to “be there” and that the event “will be wild!” Trump’s words were heeded in conservative forums across the web, who began planning their plan of assault in plain sight.

The hashtag #StopTheSteal on Facebook was abuzz with as many as 128,000 people talking about it, many who were mapping out their role in the Capitol riot. By allowing Trump’s incendiary, inaccurate attacks on the results of the 2020 elections to fly under their radar, Twitter and Facebook knocked over the first domino leading up to the events of Jan. 6.

If Twitter and Facebook have historically taken a lenient position on censoring Trump, why have they taken such an aggressive stance now? While they’d like to present this seismic shift in action as a change of heart, it’s evident that they’re trying to absolve themselves of any culpability.

Make no mistake — what happened on Capitol Hill was a domestic terrorist attack and a result of decades of online radicalization due to highly inadequate vetting on hugely influential social media sites. Allowing not only Trump but homegrown, white-supremacist terrorist groups unfettered access in not only spreading but acting on false information online had made the storming of the Capitol inevitable.

For months, they allowed him to decry the results of a fair election and encourage his followers to do the same. Twitter and Facebook’s harsh condemnation of Trump was merely an attempt to flee the scene of the mess they made. Giving Trump a platform practically placed ammunition into the hands of domestic terrorists. They chose not to heed the multitude of warnings they were given, and five people lost their lives as a result.

While a lot of the focus during the duration of the Trump presidency has been on the substance of his comments, it’s time we turn our attention to the platforms shamelessly promoting them. Social media doesn’t occur inside of a bubble — our tendency to believe that fringe groups in remote pockets of the internet hold no bearing in the real world has come back to bite us. Big tech must be held accountable for the bloodshed on Capitol Hill.