The Daily Nexus
The Daily Stench
Freshmen To Miss Out On Traditional UCSB Holiday Raccoon Cookout
December 16, 2020 at 4:20 pm by Dylan Herman 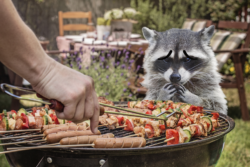 Due to the restrictive nature of the pandemic, many holiday festivities are being rescheduled, modified or cancelled. Unfortunately, one of the holiday traditions at UC Santa Barbara to be completely cancelled is the Holiday Raccoon Cookout. Freshmen this year are truly missing out on one of the most unique traditions UCSB has to offer, not to mention the delectable flavor of a campus-raised, spit-roasted raccoon.

The tradition was inspired in 2004 by Matthew Kai, a student who was born and raised in Florida. Legend has it that during a game of UNO with his roommates, a raccoon knocked over a trashcan in the front yard of Kai’s Isla Vista property. Uncertain of the origins of the sound, Kai ventured outside to investigate, discovering a raccoon foraging for food. In an attempt to scare it off, he threw an UNO card at the animal — which accomplished nothing. Upon retrieving the UNO card, he recognized the card as the “UNO-reverse card” and realized that the tables could be turned upon the ring-tailed invader.

That Christmas, after enticing a raccoon onto a spit with a little garbage and a lot of creativity, he roasted it over a smoldering couch fire. Baked to crisp perfection, his creation was so succulent that the aroma enticed everyone within a 10-block radius. Overwhelmed by the success of his meal, he established it as a UCSB tradition for all future generations of students to enjoy. While researching the origins of this tradition, we were unable to rule out the possibility that Kai was the original “Florida Man.”

In lieu of a raccoon, students this year will have to make do with a turkey. English major Lucas Nakamura commented on this outrage,

“It’s incredibly upsetting. When picking a college, there were many factors that I considered. When I finally made my decision to attend UCSB, it was not the high academic reputation of the university, the proximity to the beach, the prominent social life or the picturesque campus that drew me in. It was the raccoon cookout that I was most looking forward to, and I might have to stay for a fifth year just so I can get a full four years of Holiday raccoons.”

Nakamura, visibly upset, attempted to calm himself by taking deep breaths and alphabetizing adjectives that he had planned in advance to use when describing the raccoon, “Appetizing, ambrosial …” It was a solid five minutes before he had finished with words starting with the letter a.