The Daily Nexus
Sign of the Times
Democrats Didn’t Do Enough To Stop Amy Coney Barrett’s Confirmation
November 12, 2020 at 11:00 am by Christine Tu 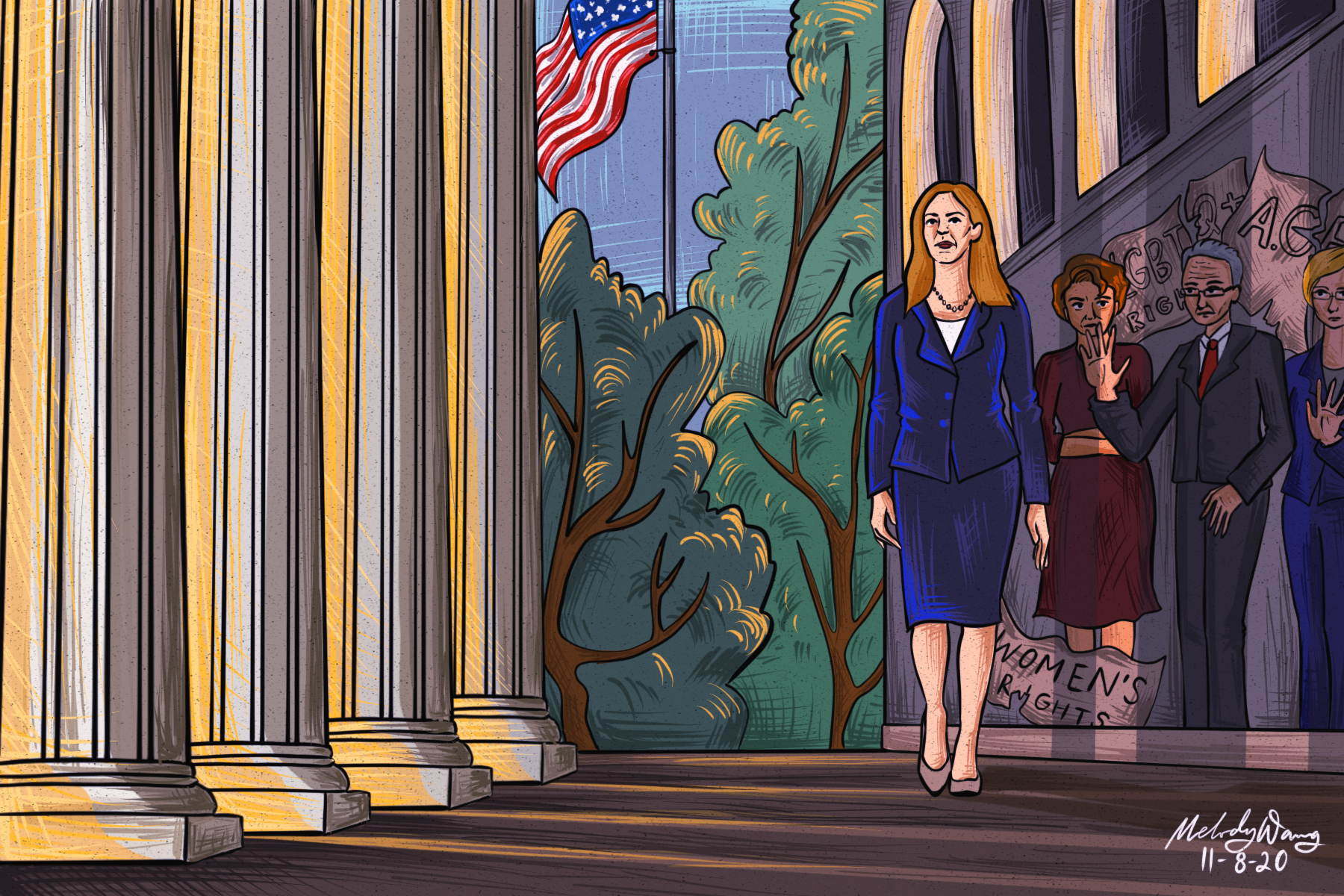 I grew up surrounded mostly by liberals in a place my peers affectionately named the “liberal bubble.” I’ve always had trust in the system; I knew that no matter what happened, things were going to be alright, so I didn’t really care about ongoing politics. There was nothing to be shocked by or angry about: People in politics were fair, righteous and able to follow basic moral rules (i.e., telling the truth, following the law — that sort of thing) that most upstanding adults supported. During my teenage years, Democrats had the power, the popular vote and, most importantly, a say in what goes on in government.

Fast forward to 2020, where it seems like everything has gone pear-shaped and nothing really makes sense anymore. From the comfort of my bedroom, staring at the front page of The New York Times on the bright screen of my laptop, I could only watch in distanced horror while decorum and (recent) historical precedence were disregarded as Amy Coney Barrett was nominated, then swiftly confirmed.

For those who missed out on the news, this is what happened. On Sept. 26, eight days after the death of Ruth Bader Ginsburg, President Donald Trump announced his intention to nominate Barrett for the position of Supreme Court justice. The timeline for Barrett’s confirmation was one of the fastest in history, demonstrating how desperate Republicans were to vote her in before the 2020 election. Her Senate confirmation hearing began on Oct. 12, and the Senate Judiciary Committee approved the advancement of her nomination by a 12-0 vote (all 10 Democrats boycotted the meeting). On Oct. 26, Barrett was confirmed to the Supreme Court by a vote of 52-48 in the Senate.

Here’s the thing: The nomination is based off of votes in the Senate, which currently holds a Republican majority. Since Republicans had enough votes to confirm Barrett, there didn’t seem to be much that Democrats could do to prevent or even overturn that vote.

According to Senator Amy Klobuchar, “[The Democrats] don’t have some clever procedural way to stop this sham, to stop [the Republicans] from rushing through a nominee.”

But despite the outcome of the vote, what did the Democrats do? And, even as the minority party in the Senate, why weren’t they able to make a difference?

The first thing that Democrats did was boycott the Judiciary Committee confirmation hearing in protest against the Republicans not following the precedent they set in 2016, when they refused to consider Merrick Garland, who was nominated by then-President Barack Obama almost eight months before the 2016 election. Instead of following the Republicans’ approach from 2016, Democrats placed photos of people who benefitted from the Affordable Care Act in their chairs during the boycott. With the Democrats not present, the nomination moved to the full Senate floor on a “unanimous vote,” with unanimous being the Republicans who were the only ones present.

The reason for this boycott was because of a committee requirement stating that at least two members of the minority party must be present for the vote to pass. However, despite this requirement not being fulfilled, the Republicans still continued with the nomination and hearing process.

Though the boycott conveyed the message that these hearings were far from normal, a Vox article on the boycott states that “because the Senate largely runs on unanimous consent, if one senator objects to an action that’s taking place, they are able to delay it from happening and slow the chamber’s productivity.” So in essence, the boycott may have allowed Barrett’s confirmation to happen faster since it didn’t actually pose any opposition to the Republicans’ unanimous consent. Ultimately, the boycott proved to be nothing more than an empty gesture.

The second thing Democrats did was hold a symbolic digital filibuster as a last ditch attempt to delay the confirmation. However, the 30-hour video series featuring several senators and leaders of more than 20 national organizations advocating against the confirmation of Barrett was symbolic and had no real effect on delaying the proceedings, unlike a real filibuster.

If there’s any indication for how badly some Democrats messed this up, it would be from this image of California Senator Dianne Feinstein giving South Carolina Senator Lindsey Graham a maskless hug and calling it “one of the best set of hearings [she had] participated in.” I mean, WTF?! Graham played a significant role in making this confirmation happen as quickly as it did, and that hug significantly undercut the Democrats’ stance that the hearings were unjust and illegitimate.

Over the past four years, and especially in these past few months, it has become pretty apparent that Republicans don’t balk at breaking rules and flouting the conventions that they themselves set. Couple that with a Senate majority and the Democrats’ inability to take useful action to stop the hearings (plus the hug!) and it becomes clear how Barrett was able to be confirmed so quickly.

So where do we go from here? A day after the confirmation, Democrats said that the Republicans will “regret” confirming Barrett, but given what little action the party has actually taken, these just seem like empty words, especially since Barrett has already been installed on the bench. If there’s any hope for change in the future, it’s that the Democrats will regain a majority in the Senate. Democrats still might have a shot at winning some of the runoff elections happening in January 2021, so go vote!

Christine Tu thinks that Democrats could have done more than … well, nothing to stop Amy Coney Barrett’s confirmation.

A version of this article appeared on pg. 12 of the November 12 print edition of the Daily Nexus.

An excellent synopsis, although the article should have detailed the existential threat from right-wing militias which count members of law enforcement among theirs. That should be illegal.