The Daily Nexus
News
Catherine Flaherty for I.V. CSD Board Director
October 29, 2020 at 12:46 pm by Daily Nexus Editorial Board

The Daily Nexus endorses Catherine Flaherty for a two-year term on the Isla Vista Community Services District Board of Directors. 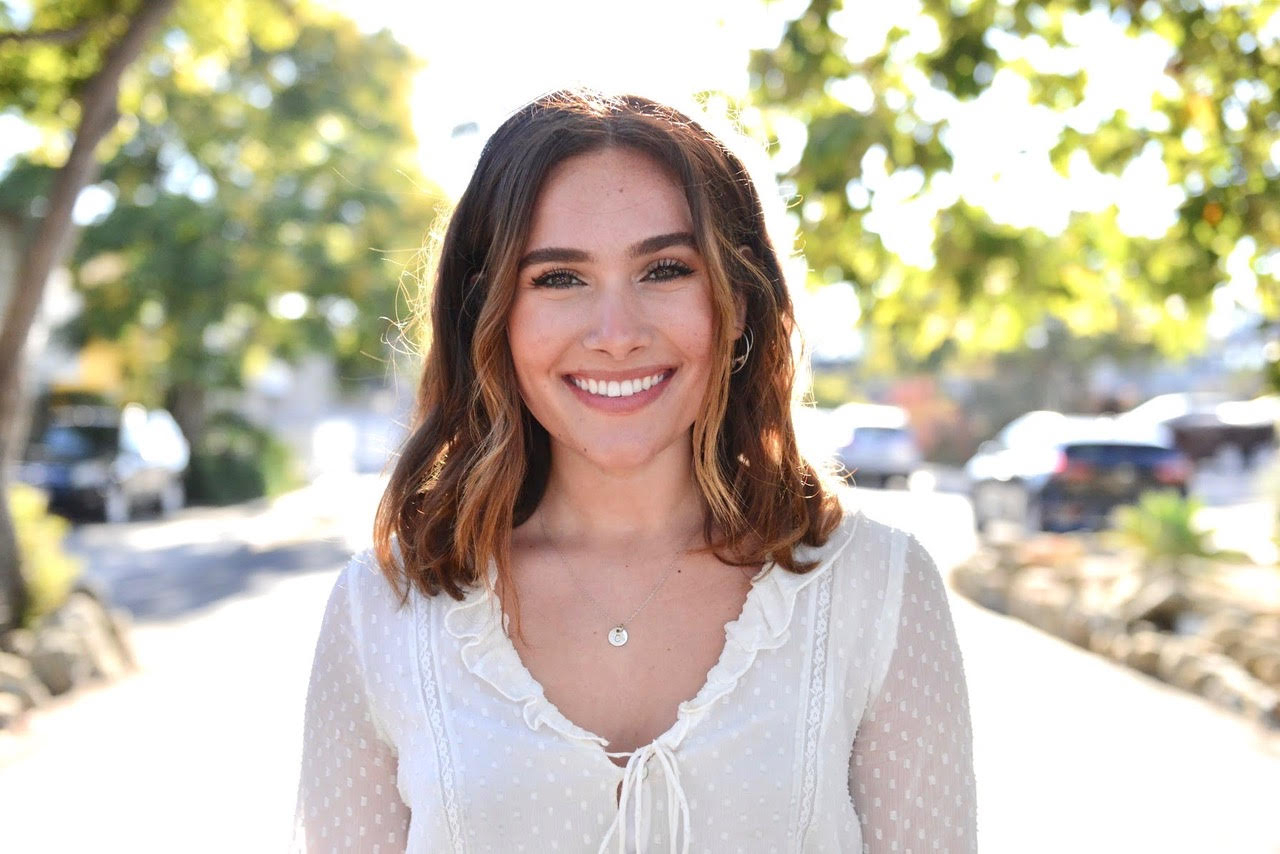 Compared to her opponent, Flaherty appears more capable of representing a student voice on the board and is better informed on the ins and outs of local governance within the community. Courtesy of Catherine Flaherty

This November, Isla Vistans will vote on a new director for the I.V. Community Services District (I.V. CSD), the seven-member board of directors that locally governs in I.V., for the first time since the board’s founding. Flaherty, a UC Santa Barbara third-year history of public policy and political science double major, and her opponent, Daniel Mitchell, a third-year music composition major are running for a two-year position on the board.

Compared to her opponent, Flaherty appears more capable of representing a student voice on the board and is better informed on the ins and outs of local governance within the community. However, extensive interviews with both candidates in August revealed a lack of institutional knowledge of and experience with the I.V. CSD board. At the time of the Nexus’ interview in August, Flaherty had not attended a single I.V. CSD meeting; Mitchell said he had attended “two or three.” As of late October, Flaherty said she had attended several meetings, while Mitchell said he had not. The meetings are typically held once every two weeks.

Flaherty is professional and well-connected in the UC Santa Barbara community. She is a current member of the Associated Students Senate and has served in several other positions offices within A.S. during her time at UCSB. She is also a member of the Alpha Chi Omega sorority.

The Nexus believes the ideal candidate for this position would not only be passionate about creating positive change for all communities in I.V. but would also be informed on how to navigate the governmental structures that make those changes possible.

The I.V. CSD, established only four years ago, is one of the community’s first great leaps into self-governance. It is a test of the democratic ideals of the nation at large — that the best people to run this community are those who are a part of it.

The success of the I.V. CSD depends on well-informed, dedicated and invested candidates. The privilege of representing the diverse community of I.V. should only be given to candidates who have proved, through a history of sincere community engagement and a demonstration of expertise, that they will be effective and thoughtful leaders.

Neither Flaherty nor Mitchell represent the ideal candidate, but Flaherty is the better choice. Her endorsement from incumbents on the board –– including Board President Spencer Brandt and Director Ethan Bertrand –– are meaningful, but our endorsement comes with caveats, which we hope Flaherty will work to correct.

Flaherty is a self-described “third-generation Gaucho.” This is something she cited as one of her qualifications for the job, later adding at the end of the interview that her “deeply personal ties” to I.V. make her a stronger candidate.

However, during her interview, Flaherty did not say specifically why this fact makes her a better candidate. Her enthusiasm is obvious, but three generations of educational privilege does not equal qualification. Nor does it speak to the struggles of many communities in I.V. who do not share this privilege –– first-generation college students, students without basic needs, families living with multiple generations in a household, community college students and the houseless population.

“I think of course the [houseless] population could definitely use more resources,” Flaherty responded, when asked which groups she believed were most underrepresented in the community.

Flaherty recognizes the presence of some of these groups in I.V. but lacked insight on what specifically these communities need and failed to offer adequate ideas on how to reach them.

On the pandemic, Flaherty said she wants to ramp up mask distribution and use social media to educate Isla Vistans about COVID-19 case counts in I.V. Simply put, this is not enough. Among college campus reopenings across the nation, a successful few have shown safe reopenings to be possible, at least for the time being, but the commonality between those campuses is extensive testing –– something that is not available in I.V.

Mitchell proposed a similar solution to the COVID-19 pandemic in I.V.: increased hours for mask hand-outs and hand sanitizer giveaways. Despite saying that the “COVID-19 pandemic and seeing just how the federal government has totally failed to respond” was one of two major reasons why he decided to run, Mitchell’s plan falls short of what the Nexus believes an effective mitigation of the virus would look like.

I.V. needs a walk-up, long-term testing site. I.V. needs flu vaccination sites, for more than just UCSB students. I.V. needs every household to know what to do if they feel sick, have symptoms or come into contact with someone. These resources need to be free, translated in English and Spanish and sent to every residence.

In Santa Barbara County, all eyes are on I.V. How the I.V. CSD responds to COVID-19 in the community could affect a lot in the coming months — including the county’s mobility into the next reopening tier —  and if they are going to get a grip on things, Flaherty needs to step up the pandemic efforts, if elected to the board.

If elected, Flaherty would be the sole woman on the board of directors. Diversity has been a long-standing issue on the I.V. CSD; there has never been more than one woman serving on the mostly-white seven-member board at any given time. The most recent woman to serve on the I.V. CSD was Kristie Nguyen, who will leave the board this November.

This community, like many others across the nation, is navigating a profound reckoning with police. I.V.’s small-scale, self-governing body could set an example for how communities can change the way we engage with law enforcement. It is up to the younger directors on the board to help lead the way into a new future of policing in I.V.

This will require fresh ideas on community policing solutions. Flaherty said she wants to increase the use of Community Service Officers and have police in I.V. undergo additional racial bias training. This is not enough.

Her opponent Mitchell is running with a plan to focus on I.V.’s COVID-19 recovery and to support access to basic needs.

“I think I’d be the best to serve in this seat because I’m very ambitious. Obviously everything that I have, all my plans, they might not all get accomplished, but the fact that I would push for them and be really hard working and aggressive when it comes to tackling all the problems we have in I.V … I think that certain drive is what really [distinguishes] me as a candidate,” Mitchell said.

But in his interview with the Nexus in August, it was clear that Mitchell did not have a deep enough understanding of the structure of basic community services in I.V.

Leaders in I.V. cannot be effective without a comprehensive understanding of the structures that affect daily life here. I.V. deserves capable and creative leaders, but at the very least, they should be well-informed and knowledgeable. Flaherty’s platform and experience holds up better than Mitchell’s, and the Nexus believes she will be a positive addition to the I.V. CSD.

The candidate you are endorsing knows nothing about this community or the office she is running for. Moreover, she is in her third year of college applying for a two-year seat. That means she will most likely leave before serving a full term. This CSD is an asinine attempt at extending student government into real government where my taxes pay for some dipstick to diddle in local politics for a year. Anyone interested in listening to this moronic experiment need only cue up the recordings of CSD meetings. Utter and complete absurdity. Is Ms. Flaherty’s sorority a COVID hot spot?… Read more »

Why don’t you run yourself then

try listening to one of the meetings. the csd is a grift

Campus United is poisitionig for her to run for pres prob. Agree with you OP. Campus United must be bailing out Daiky nexus for the 250k they owe at this point for the amount of endorsements they give to them

it seems like you have so many great ideas on how to improve the IVCSD!! cant wait for you to step up and run office yourself! (:

This article does not mention that Ethan Bertrand and Marcos Aguilar are running unopposed for four-year seats on the board. Aguilar, “a former UCSB student and long time Isla Vista resident” is a complete unknown. Unopposed incumbents like Bertrand are cherry picking long term board members. The CSD is a grift plain and simple–with $1 million of tax payers dollars in the bank.