The Daily Nexus
News
On Second Attempt, SB County Board of Supervisors Pass Ordinance To Fine Large Gatherings in I.V.
October 21, 2020 at 9:15 pm by Max Abrams

In their second attempt to do so, the Santa Barbara County Board of Supervisors passed an ordinance on Tuesday that would allow peace officers and public health officials to enforce the county’s public health orders in unincorporated areas of the county. 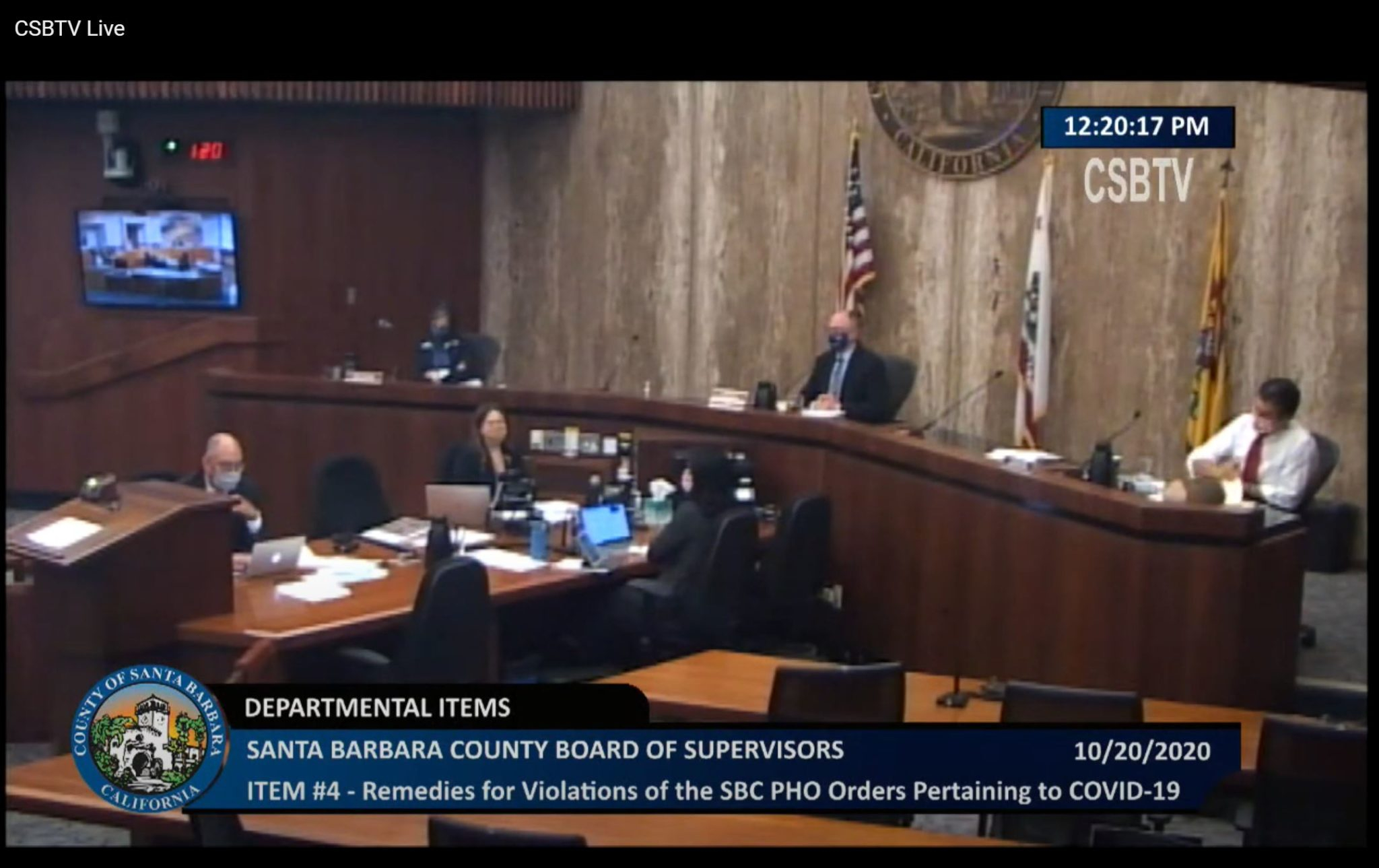 The new ordinance is a reincarnation of a previous “urgency” ordinance that fell one vote short during the board’s Aug. 25 meeting, which forced them to hold off for at least six weeks before bringing it back to the table.

Now, residents in unincorporated areas of the county, including Isla Vista, found in violation of “any health officer orders,” could face fines ranging from $100 to $500, Kelly Hubbard, director of Santa Barbara County’s Office of Emergency Management, said at the meeting.

This includes Health Officer Order 2020-12.12, which prohibits “‘gatherings’ large and small, unless an exemption applies.”

For some residents of I.V., which currently has the highest number of active cases in the county at 35 and more total cases than the City of Goleta, the ordinance was a long-awaited response to hold those who continue to participate in large gatherings or parties accountable.

“This has been a longstanding issue in the community,” Jonathan Abboud, Isla Vista Community Services District General Manager, said during the public comment portion of the meeting. “Everyone I’ve talked to, across the board, supports something like this ordinance.”

Abboud argued that an ordinance would be well within reach, “given the knowledge and history of how zero-tolerance the county has been in Isla Vista with parties” during Halloween and Deltopia, especially when “there was not a public health emergency or immediate threat to anyone’s lives.”

A number of UC Santa Barbara students offered similar sentiments and encouraged the supervisors during public comment to pass the ordinance, including Yasamin Salari, a fourth-year political science major and the Associated Students External Vice President for Local Affairs, and Izzy Mitchell, a third-year communication and economics double major, president of Gauchos For Transparency and chair of the UCSB Public Safety Commission.

Despite calls to enact consequences for those who continue to participate in large gatherings and parties, Williams urged the county to take an education-first approach before resorting to fines and citations.

In establishing a middle-ground for enforcement, Barney Melekian, an assistant county executive officer, explained during the meeting that the fines would only be issued administratively — not criminally — to avoid placing the “full weight of the legal system” on offenders for smaller infractions.

Melekian also put to rest claims that the ordinance was created solely to clamp down on I.V. In actuality, he said, the ordinance will address the triple threat of holiday gatherings, college parties and the “twindemic” — when hospitals are overrun by flu and COVID-19 cases simultaneously.

Though the ordinance was conceived in part with the idea of softer penalties in mind, Lavagnino and Adam remained unconvinced about its efficacy, rebutting the ordinance for encroaching on people’s freedoms to gather.

“I wish that this board would entertain a different approach in dealing with the very real effects of the COVID pandemic,” Adam said. “I would prefer that our county government reject the idea of draconian regulations for failing to comply with health officer orders.”

“This is one more notch in the belt of the government putting its foot down,” Lavagnino said. “I think its a well-intentioned ordinance but at some point there’s going to be a problem.”

“We have to put it in perspective,” he continued. “And at some point we have to let people get back to reality.”

Meanwhile, UC Santa Barbara is continuing its attempts to pump the brakes on large gatherings in I.V., explaining in a campus-wide email to students yesterday that it is “extremely concerned that COVID-19 may be spreading rapidly throughout Isla Vista,” and that it will continue using “education and, if necessary, punitive efforts” to combat large gatherings.

In an effort to contain outbreaks and mitigate COVID-19 transmission, the university is working closely with the Santa Barbara County Public Health Department, its Director, Van Do-Reynoso, said during the meeting.

This includes a joint partnership with UCSB for contract tracing outbreaks in I.V., in addition to expanding testing efforts at I.V. Theater with extended hours and extra days of service, Do-Reynoso said.

Most COVID-19 outbreaks in I.V. —  including the 13 new cases identified last week in two separate clusters in greek life housing — resulted in mild symptoms at worst, Do-Reynoso said, and a majority of those who tested positive experienced no more than a loss of taste or smell and feelings of fatigue.

But mild symptoms do not absolve I.V. from contributing to the county’s overall COVID-19 metrics, Do-Reynoso said. And as a result, the community’s recent uptick in confirmed cases could be what holds the county back from entering the next stage of reopening, Hartmann added.

“If we don’t listen to what this community is telling us they need, we risk not only going up to the next level, but backsliding,” Hartmann said. “I don’t know how we can’t respond.”

Max Abrams
Max Abrams served as the lead news editor for the 2020-2021 school year. He is from Buffalo. That's all you need to know.
5 Comments
Inline Feedbacks
View all comments

So much for being a free country, huh? I agree that it’s stupid to ignore all of the health warnings, but how can a group of bureaucrats and low level elected officials disallow a bunch of adults getting together on private property?

Plus, I wonder if Das ever passes gas from his ass??

Yes you should be free to endanger and possibly kill your fellow people.