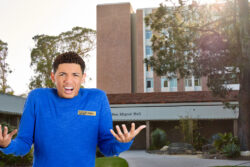 The UCSB community was left stunned after it was announced earlier this month that university administration would be terminating 130 resident assistant contracts weeks before move-in.  One would think that, out of both housing and a job, UCSB R.A.s would be upset, considering many were unable to find affordable rent in Isla Vista and forced to turn to more avante garde forms of university housing. However, Nexustentialism spoke with a handful of recently fired Gauchos that are actually really happy with their newfound “abodes”.

“There has been a bit of an issue communicating with the neighbors,” said new dumpster resident and defunct R.A. Allison Ratz, of the obese racoons constantly harrassing her new home in the night.

“They’re not super respectful of my space even though I’ve tried to tell them I’m a new tenant, but I have more square footage than my last I.V. apartment, so I can’t complain!”

“At first I was like ‘damn,’ but then I was like, ‘damn!’” said Marsh, who was standing in the lagoon fashioning a kind of fishing line with floss and a stick, when Nexustentialism spoke with him.

“I’ve always wanted to like, live off the land, so I guess you could say this whole thing was kind of meant to be,” Marsh said, while unsuccessfully tying his bait.

“What better way to appreciate nature’s great bounty?” he added, while a deflated bag of Hot Cheetos floated past his legs.

Kelly Lopez, a second-year returner R.A., who was set to be placed on the top floor of FT for the coming year, said the administration’s decision has been a “blessing.”

“Sure I don’t ‘have walls,’ and maybe I don’t ‘get to be dry’ all the time,” Lopez said, while speaking from the half inflated raft she’s been living in off the coast of Devereux. “But you can’t beat this view!”

Sam Penn thinks that there’s nothing stressful about not having housing and that we, as a society, should normalize raft living.