The Daily Nexus
Film & TV
In Review: “I’m Thinking of Ending Things”—I’m Thinking I Need to Watch This Again
September 28, 2020 at 3:04 pm by Liliana Linan 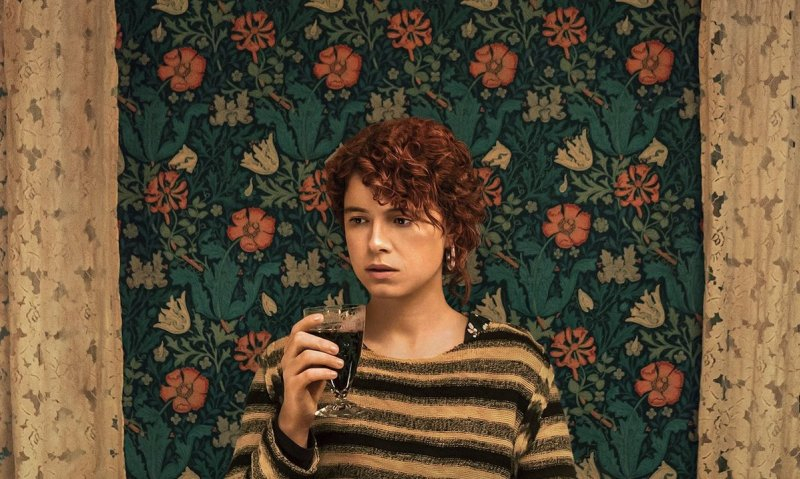 A seemingly simple yet intriguing title and a plain, innocent-looking banner prove why you shouldn’t judge a book by its cover. “I’m Thinking of Ending Things,” from director Charlie Kaufman (writer of “Eternal Sunshine of a Spotless Mind”), is Netflix’s new complex and disturbing film that leaves you both speechless and unable to stop rambling about its true meaning. Based on a 2016 novel of the same title by Iain Reid, the film stars Jessie Buckley (“Chernobyl”), Jesse Plemons (“Breaking Bad”), David Thewlis (“Harry Potter” series) and the iconic Toni Collette (“Hereditary”).

Lucy, played by Buckley, narrates the film and her melancholy, raspy voice begins the first scene. The opening line, “I’m thinking of ending things,” plays over beautiful yet eerie instrumental music, with shots of floral wallpaper and parts of a mysterious house that is not yet known to the audience.

From the beginning, the film fulfills its dark and cerebral labels, and though not quite a horror movie, the cinematography contains elements of new wave horror films. “I’m Thinking of Ending Things” is a psychological thriller that plays with the audience’s sanity and emotions — and provides an intense and confusing timeline. Instead of relying on cheap jump scares and overused gore, the terror invoked on the audience is a result of the creepy characters, odd camera angles, nonsensical lines and ever-changing details.

The plot of the film focuses on Lucy and Jake (Plemons), who visit Jake’s parents (Collete and Thwelis), at Jake’s childhood home on a farm. Lucy is a physicist and painter who hasn’t been dating Jake for long but already wants to end their relationship. The bright colors of her clothing and red hair make her stand out from the rest of the film’s bleak setting. Her opening monologue is violent and vivid, and immediately makes you wonder what exactly she wants to end. Almost like a suicide note, Lucy begins to talk about her relationship with Jake. She describes it as “a real connection — a rare and intense attachment” while she expresses her lack of enthusiasm for the trip. The two make an awkward couple, especially since he constantly ignores her questions and interrupts her thoughts.

All films require concentration, but this film requires absolute silence as well. The plot itself is confusing, with random cut-ins and an uncomfortable ambiance, so the little details tend to go unnoticed. For those who get bored easily, the scenes may move too slow, and those who prefer straightforward films with uncomplicated endings will absolutely hate this movie. The final product is an artsy, creepy creation with long scenes and a dark palette that makes viewers uneasy. Though labeled as a thriller, “I’m Thinking of Ending Things” is a combination of horror films “The Shining,” “Get Out” and “Hereditary,” and will have the audience questioning everything.

The script is dense but filled with intellectual conversations which are essential to understanding the movie. Once the couple arrives, Jake’s strange parents welcome them, and they sit down for an uncomfortable dinner. Jake’s father can’t even look him in the eye, and Jake is very quiet and hateful towards his parents the entire time. Jake appears miserable at his parents’ house, and yet he elongates the stay as much as possible and ignores Lucy’s anxieties and endless pleas to leave. Though Jake remains unfazed, Lucy notices how his parents’ clothes and age changes throughout the visit. Lucy seems to be the only sane character because she questions most of the oddities that occur: “There is just something profoundly and utterly unfixably wrong here.”

“I’m Thinking of Ending Things” is a dark thriller which benefits from a second viewing to piece everything together — maybe even a third. Jake is a disturbed character and though his mother takes great pride in his diligence, his persona is difficult to figure out. He wishes to fill his mind with lies “to pass the time, in the blink of an eye” and lives in a musical-loving fantasy. Just like Jake, Lucy seems to have self-identity issues, and she quotes Oscar Wilde saying, “Most people are other people. Their thoughts are someone else’s opinion, their lives are mimicry, their passions a quotation.”

The film depicts a nonlinear narrative which plays with time and space. Lucy tells herself that “people like to think of themselves as points moving through time, but I think it’s probably the opposite. We’re stationary and time passes through us.” The most open-ended part of the film is the haunting title and the constantly repeated quote, “I’m thinking of ending things.” Lucy never actually says this phrase out loud, and Jake never lets her finish her thoughts or words anyway. The film touches on death, loneliness and identity through abstract and relatively unfinished scenes.

“I’m Thinking of Ending Things” surpasses its labels and is more than likely to be misunderstood, but viewers become consumed with finding the film’s unambiguous message. Sometimes, however, a message is not required for a piece of art to be worthy of admiration.