The Daily Nexus
Sign of the Times
A True Secular Government
August 7, 2020 at 7:00 pm by Nathan Lee 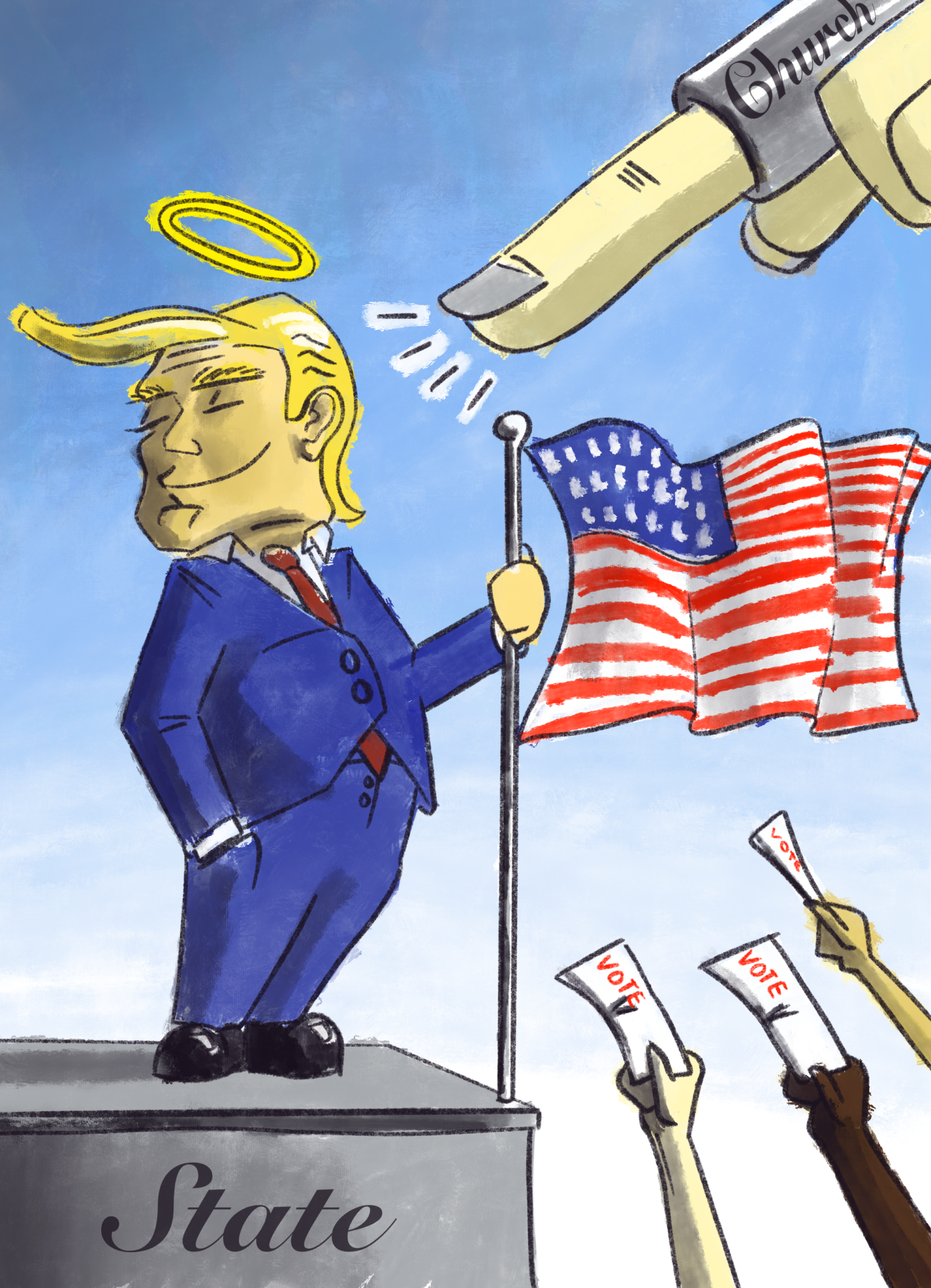 My interest in politics peaked in 2016. I watched all the Democratic and Republican debates, ultimately finding myself surprised by how much the candidates’ faith was brought up. It was genuinely shocking how many times the candidates had to express how devoted they were to their faith and how hard they were going to try to protect my “Christian values.”

Even as a Christian myself, I find this kind of faith-based question empty and misleading. I know many Christians who share different and even opposing beliefs to my own, so I questioned how a candidate could claim to protect all of our varying values. It seemed impossible to me to accommodate opposing values and beliefs just because we happen to worship the same god — not to mention that these kinds of statements also exclude more than one in three Americans that worship a different God or don’t worship one at all.

A large reason for that disparity is that individuals who are religiously unaffiliated are less likely to participate in elections as a whole, which causes a lack of support for atheist candidates. This compounded with the fact that more than half of the US population would be less likely to support an atheist for elected office further explains why there are so few atheists in national politics.

Americans are less likely to support a person who doesn’t believe in God for elected office due to a perceived lack of morality and consequential distrust from the public. This is a false stereotype, as morals come from your personal values and philosophy rather than religion. Religion can influence one’s moral judgement, but does not absolutely determine it. Religious people are a diverse group with different experiences and who worship various gods with different divine wills. It is not only unfair, but in fact undemocratic to think that just because a candidate doesn’t worship a god they are considered to be “less moral” or “less trustworthy.”

This belief offers an unearned privilege of morality and trust to religious candidates which proves to be an advantage in elections. In a true democracy, everyone should have the equal chance to vote and run for public office, giving someone an unearned advantage based just on faith seems undemocratic to me.

This kind of thinking is also a corroding factor in the American principle of separation between church and state. Thomas Jefferson believed that the First Amendment should build a wall of separation between church and state, but voters generally consider a person of faith to be more trustworthy and morally superior. In other words, we are secretly giving the church and its followers the power to influence our secular government.

But a leopard cannot change its spots. It is hard for voters to suddenly change historical trends connecting religion and voting. So how can we erase this corroding agent of our secular government and this unwritten discrimination based on one’s lack of higher being? The answer I found came from France.

As the 19th century wound down, Europe and North America had mostly granted their citizens safety from religious persecution and equal treatment based on religion. Some countries like the British Empire and Denmark still maintained a national religion and gave aid to that religion, but others like the United States and Germany granted the freedom of religion and had no official religion to prevent favoritism. However, France stood out with its concept of laicite, which made religion a private matter and pledged to rid their government of any religious influence.

If the law accommodates or makes exceptions to certain groups of people just based on religion or the free exercise of religion, it will effectively make people or organizations with faith super-citizens.

Although the official translation of the word laicite is secularism, I think a better translation would be “freedom from religion.” The idea of “freedom from religion” is an idea rooted in the era of the enlightenment from the writing of John Locke as well as the principles of the French Revolution. After a century of fighting for a secular government, the Third French Republic finally enshrined the notion of “freedom from religion” into the French constitution. It reads “The Republic does not recognize, pay, or subsidize any religious sect.” This law not only protects religious freedom but also ignores the existence of religion during the governing and election process, requiring state employees to set aside their religion within the public sphere.

By not recognizing any religion, France doesn’t allow its state employees to display their religion in public, including everyone from the president of France to a public school teacher. The same applies to anyone in or running for public office.  Also, since the French government doesn’t recognize religion, it ignores the religious preferences of all its citizens when legislating and instead makes legislation that would benefit its citizens on strictly secular grounds.

Religion is still a big part of France and the French culture, but just not in politics. The tradition of laicite helped French voters to eliminate any “religious bias” and focus on other attractive qualities of candidates like past records and policies.

The French system isn’t perfect; there are many steps that they took that seemed too radical to me, like not allowing students who attend public school to display their religious symbols. But I think the United States certainly has a lot to learn from France and should adopt a strict separation between church and state, especially especially as this country becomes more diverse in faith or lack thereof.

In an ideal world, no politician could use their religious beliefs to gain an unfair advantage over their opponent. No legislation would be made in consideration of religion and would instead be focused solely on the interest of the nation or its people. Laws like the Religious Freedom Restoration Act — which allows employers and businesses to discriminate against members of the LGBTQ+ community and not follow parts of the Affordable Care Act that provide contraception to women, based on religious grounds — would cease to exist.

If the law accommodates or makes exceptions to certain groups of people just based on religion or the free exercise of religion, it will effectively make people or organizations with faith super-citizens by giving them special privileges to ignore laws passed by democratically elected legislature and intended to be applied to all citizens.

Nathan Lee believes that our government needs more than freedom of religion; it needs freedom from religion.

Hi Nathan, well said. See Meg Wallace, Freedom From Religion, available on Amazon, for an extended discussion of that secular ideal. It was published in Sydney, 2015.