The Daily Nexus
Film & TV
“Palm Springs”: The Perfect Film For This Never-Ending Quarantine
July 17, 2020 at 12:03 am by Liliana Linan 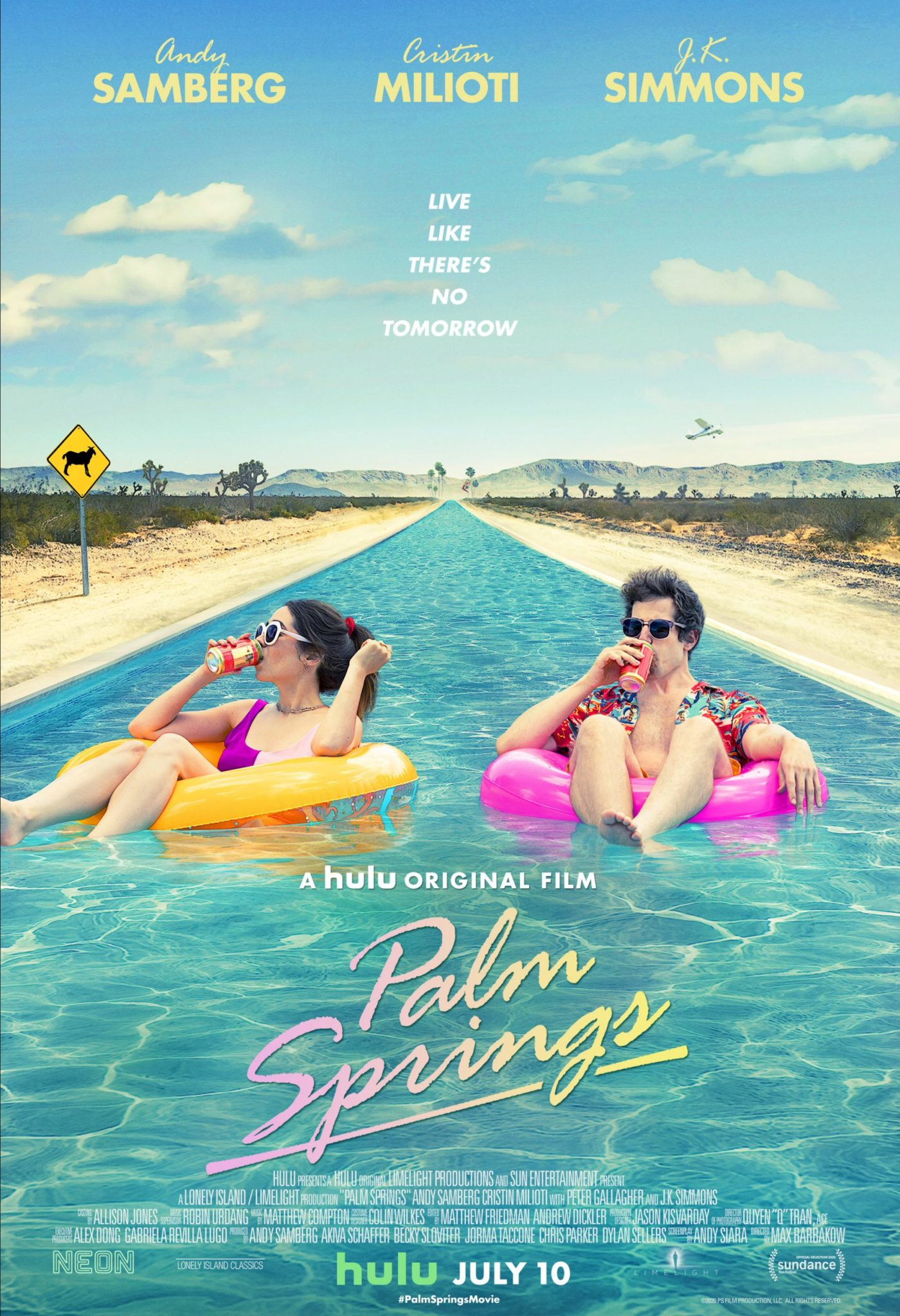 Do you feel like every day during the pandemic is the same and time is a construct that you can’t keep track of anymore? Well, the characters in Hulu’s latest film “Palm Springs” can relate — except that they really are stuck in a time loop where they relive a wedding day in sunny California.

Set in Palm Springs, the film follows two guests, Sarah and Nyles, who are forced to endlessly restart the day in the same place they woke up each time they fall asleep. Leading lady Cristin Milioti (“The Wolf of Wall Street” and “How I Met Your Mother”) plays Sarah, the black sheep of her family, who dreads having to wake up every day to attend her younger sister Tala’s (Camila Mendes) wedding. She is shamed and labeled as the alcoholic fuck-up, who isn’t even capable of seeing through her duties maid of honor.

Nyles, on the other hand, played by comedian and actor Andy Samberg, doesn’t seem to mind lounging in the pool by day and dancing at the wedding in his Hawaiian shirt by night. He accompanies his self-centered girlfriend Misty (Meredith Hagner), who is one of Tala’s bridesmaids and whom he could not be more different from. Thus, it’s no surprise his easygoing and carefree personality was attracted to Sarah’s anxious yet witty persona.

The time loop trope used in “Palm Springs” is when a specific amount of time is infinitely repeated — in this case November 9, Tala’s wedding day. Though the basic plot of the movie isn’t innovative (think “Groundhog Day” or “Happy Death Day”), “Palm Springs” is able to pull off a fresh and heartwarming time trip inside of a modern rom-com. Like any good rom-com, the film has its comedic highs and distressing lows, but the genre’s cheesy moments, which usually turn off some viewers, don’t apply here. There aren’t any cheap comedic bits, so be sure not to write off the film prematurely, because its gloomy shadows and twists are sure to excite even the most skeptical of viewers.

Comedy is always difficult to pull off, especially with the dark and harrowing themes of love, family and the meaning of life and happiness, but this movie does it all. Both characters struggle with what life means to them, and early on in the film, Nyles describes the point of living as learning how to “suffer in existence” as he explains how people just have to “find peace.” Though he gives up on trying to escape the time loop and has accepted his new life, Sarah pushes against her fate and is constantly trying to return back to normalcy.

On one of the endless wedding nights, the two camp outside and say cheers to “pretending not to care” before they share a blissful night together. But of course, the constant pretending eventually hits its boiling point, and when Sarah begins to distance herself, she uses Nyles’s own words against him: “It’s all meaningless, right?” to which he wistfully replies, “I mean…I hope it’s not all meaningless.”

Through unrealistic circumstances, the film portrays the unfortunate yet legitimate human issues of struggling with a sense of belonging, self-identity and the meaning of life. By reliving the same day, the characters are eventually able to own up to their mistakes, right their wrongs and learn that you must take risks to find love and live a fulfilling life. The film makes you question your own life and though not explicitly stated, the possibility of finding your soulmate, if such a concept even exists.

Especially during this tumultuous year, we have all realized what Roy (J.K. Simmons), another character stuck in the time loop, found out himself: “Things change, ya know. Priorities change.”

Rom-coms portray love as the solution to everything, but more than love is needed to remedy life’s ups and downs. Life requires you to take charge, appreciate the time you have and overcome your fears to follow love. As Roy wisely tells Nyles, “At least you have each other. Nothing worse than going through this shit alone.” Funny yet profound, this film is so captivating because it goes beyond the usual surface-level storylines.

So escape to “Palm Springs” without leaving your couch, and watch this feel-good movie with the ones you love the most.