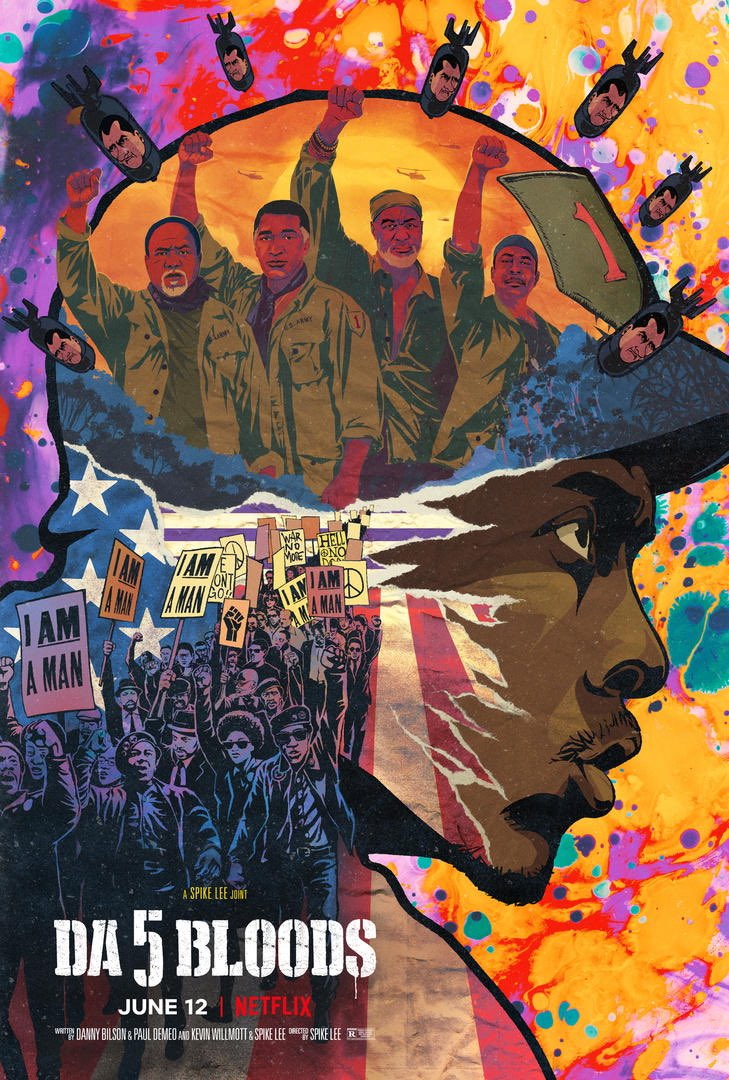 Following the footsteps of other prominent directors, Spike Lee has now released his first film on a streaming platform: Netflix. His newest film “Da 5 Bloods” is extremely political, and like his other films, focuses on Black struggles and oppression. Any history buff would enjoy it, but I recommend the film to everyone because the issues examined in it are unfortunately still prevalent today; especially right now with the new wave of the Black Lives Matter movement.

The 5 Bloods are a group of five black men who were sent to fight for America during the Vietnam War. The film focuses on Paul (Delroy Lindo), Paul’s son David (Jonathan Majors), Otis (Clarke Peters), Eddie (Norm Lewis), Melvin (Isiah Witlock Jr.), and Norman (Chadwick Boseman). The film opens with a clip of Muhammad Ali, who famously condemned the killings of people abroad because unlike the United States, those countries “never lynched me, they didn’t put no dogs on me, they didn’t rob me of my nationality.” This starts a montage overlapped with Marvin Gaye’s voice, which is the first time of many he is heard in the film. There are clips of Black soldiers, war scenes and historical moments that happened around the time of the war, which was fought from 1955 to 1975. Then, there are photo inserts of Martin Luther King Jr., Angela Davis and Malcolm X, whose speeches are sprinkled throughout the movie, along with references to Black riots in response to injustices.

From the Netflix preview I got the impression that the film was going to be primarily set during the Vietnam War, but instead it focused on the Bloods during modern-day America, and their time in the war was only briefly shown through flashbacks. Norman was killed during the war, so the other four Bloods return to Vietnam to find his body and the gold they buried about 40 years prior. One of Spike Lee’s most interesting cinematographic choices was to film the flashbacks with the same older actors that portray the four Bloods as in the present-day plot, instead of using younger ones in their place. In my opinion, this was a better choice because the four men were recalling their time in Vietnam and all were able to see themselves as the age they are, but they only remember Norman as young.

The entire journey in Vietnam brings back memories of the torture that the Bloods went through when they were young soldiers. They show symptoms of the PTSD they still experience, and though they seem proud to call themselves Americans, they also express the disgusting oppression they’ve been subjected to their entire lives. The war is also constantly referred to as the “American War” by the Vietnamese people, who still hold resentment towards the U.S. Yet, both sides show bitterness to each other still to this day; and as the Bloods’ tour guide discloses, “After you’ve been in a war, you understand it never really ends,” which the audience sees through the Blood’s own nervous breakdowns and in tense moments between them and Vietnamese locals who claim the men killed their families. Paul specifically becomes livid at the locals’ statements, and it is only at the end through his visions of Norman that he is able to own up to the truth of his corrupt time in the military.

Norman wasn’t only one of the 5 Bloods but also their leader, teacher and preacher. Otis explained he gave the bloods “Something to believe in. A direction, a purpose. He taught us about Black history when it wasn’t really popular back then… Yeah, he was our Malcolm and our Martin.” Norman emphasized peace and justice but wasn’t afraid to show his frustration with the treatment of Black people in America, and who better to have as the heroic idol of the group than the Black Panther himself.

During one of his many teachings, Norman stressed that “War is about money. Money is about war. Every time I walk out my front door, I see cops patrolling my neighborhood like it’s some police state. I can feel just how much I ain’t worth.” Black men were sent to Vietnam to fight for a country that was not fighting for them. They were fighting for the rights that they weren’t yet granted, and they were sent to die. Black and brown men disproportionately died during the war, because they were disproportionately sent. As Otis explains to Paul’s young son David, “White boys who stayed in college, they’d dodge that shit. They put our poor Black asses on the front lines, killing us off like flies.”

“Da 5 Bloods” deals with emotional trauma caused because of the war, trust issues, complex relationships with fathers and the many and seemingly never-ending injustices experienced by Black people in America. While not my favorite Spike Lee movie, it was still an enjoyable and beneficial watch. The film takes a different approach to Vietnam War films, most of which focus on the hardships of white soldiers and may portray one token Black actor. They too often ignore and erase the Black men who were thrown into an unjust war and died for a country that didn’t care about them.

This film reflects on how little change has happened since the Vietnam War, and how Black people in America still have to worry about losing their lives and lack of full rights every single day. Justice is slow, and because of that many of us get burnt out and discouraged, but we must continue to fight for our rights. Part of Netflix’s new Black Lives Matter category, the release date of “Da 5 Bloods” couldn’t have been at a more fitting time, and watching films that address systemic racism still prevalent in American society is a great way of educating yourself about Black issues.