The Daily Nexus
Science & Tech
UCSB Researchers Investigate the “Untapped Gold Mine” of Wastewater Testing for COVID-19
May 28, 2020 at 10:30 pm by Sean Crommelin

Researchers with the Holden Lab, based in the Bren School of Environmental Science & Management at UC Santa Barbara, are in the middle of processing wastewater samples with the goal of detecting the presence of the SARS-CoV-2 coronavirus. 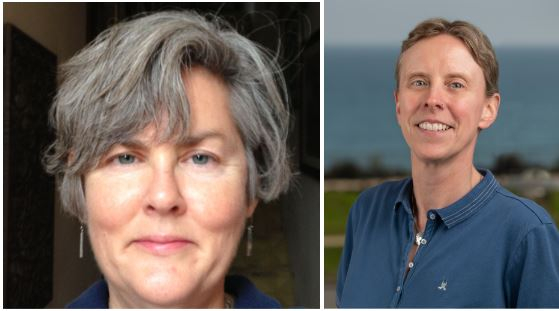 The team has been provided samples from the El Estero Water Resource Center, located in Santa Barbara, and the Montecito Sanitary District’s treatment plant, located in Montecito. The Holden Lab has received funding from the Coastal Fund, a branch of Associated Students, to cover the costs of this project from mid-April to the end of June.

Through this, the lab aims to understand not only the current circulation of the novel coronavirus, but also project what capacity must be built in the future to combat a potential second wave, according to Laurie Van De Werfhorst, a senior staff scientist who’s worked with Dr. Patricia Holden for almost 19 years.

“If we’re able to detect — hopefully quantify,  but at least detect — the virus in wastewater, we can monitor that quantification over time and see if it’s increasing or decreasing. It might predict when that second wave of infection will happen,” Van De Werfhorst said.

“If it works, [we] might be able to inform the public before you start seeing increased numbers of positive test results.”

However, with many lab operations put on hold in the wake of the pandemic, processing and analyzing samples is a bit more complicated than it would be normally. Only one researcher has clearance to physically work in the lab: Dr. Holden.

Due to this, Holden and her team have only been able to collaborate remotely. Van De Werfhorst has been assisting Holden with logistical tasks from outside the wet lab, such as locating equipment and providing Holden with standard operating procedures regarding how one must process the wastewater samples.

“The idea is all sorts of viruses are in that wastewater sample. You pour it through a filter and on that filter you’re trying to capture cells. And on the filter, you go through an RNA extraction kit because you want to extract the RNA from those cells that we’ve captured on that filter,” Van De Werfhorst said.

“It extracts the RNA from the cells, it purifies it, cleans it up and at the end, you have a small tube of RNA that you can then use different types of analyses to detect or quantify different targets that you want,” such as, in this case, SARS-CoV-2.

The researchers are acting alongside others around the world who have looked toward the informational “untapped gold mine” of wastewater in their efforts to curb the spread of the coronavirus.

The Holden Lab, in addition to attending summits and seminars regarding sewage surveillance and COVID-19, has also been in direct communication with researchers in the Bay Area, Michigan, Nevada and Massachusetts, as well as private companies monitoring and sampling municipal wastewater.

This practice, known as sewage surveillance, has been employed to track the presence of opiates and other chemicals through wastewater previously. Now, scientists are using it to track COVID-19 as it courses through the population.

“The Netherlands published a preprint paper where they were proactive and able to sample their wastewater treatment plants before any cases had been documented in their country,” Van De Werfhorst said.

As more detection of the virus was observed in wastewater, there was a similar increase in positive cases reported in the community.

Wastewater monitoring could also potentially be used to better understand the efficacy of public health safety measures such as social distancing, as well as how the spread of COVID-19 may be heralded by the presence of the virus in wastewater.

“In California, we’re staying at home as much as possible, but things are starting to be lifted, and as they’re lifted, we might be able to see a difference in the detection rate or the quantities of the virus,” Van De Werfhorst said. 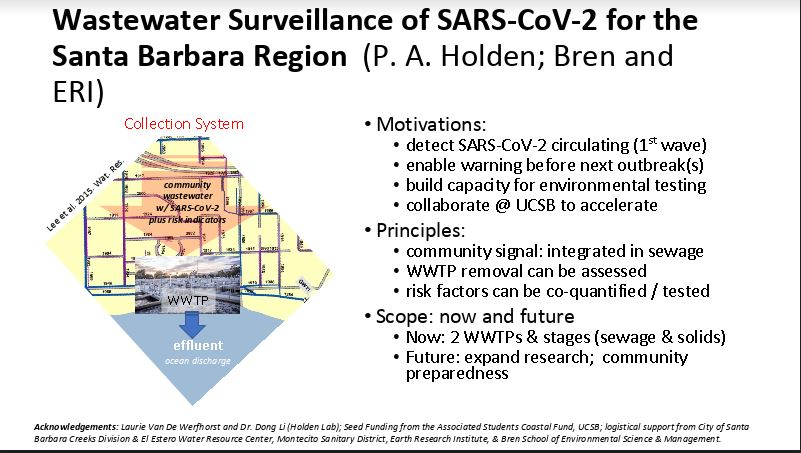 The ultimate goal for the Holden Lab is to prepare the community for forecasted future outbreaks. Courtesy of Patricia Holden

This isn’t the first time the Holden Lab has volunteered its efforts for the sake of the community. For years, the lab has monitored the water quality of the surf zone off of Goleta Beach, East Beach and Santa Barbara Creek looking for indicators of human fecal pollution.

During another natural disaster, after the 2018 Montecito mudflows, the Holden Lab approached the Coastal Fund in search of emergency funding; with this, they were able to sample sediments dumped onto Goleta Beach through the beach sand and the surf zone in order to monitor for contaminants. This pilot study was eventually published.

“Most of the research that I’ve been focused on involves water quality [and], in particular, microbial source tracking,” Van De Werfhorst said.

“We have a history of local water quality research as well as working with wastewater treatment plants and working with those samples. We’re always looking for ways to help the community with our knowledge and expertise.”

When laboratory research ramps back up again, Van De Werfhorst is certain that lab practices will be different to accommodate social distancing and other guidelines. How different they will be is still an unknown, although the researchers will likely have to add lab surfaces like door handles and communal equipment into the equation.

Meanwhile, while they await the slow return to normalcy, Holden and her colleagues will continue chugging along, diligently perusing their samples in search of the virus. If all goes well, they’ll be able to map out the prevalence of COVID-19 in time for fall quarter, at which point additional funding will have hopefully allowed them to continue their project.

“If we show during this initial April to June study that we’re able to detect frequency or quantity correlators associated with the number of positive cases in the area, then that makes it a strong tool to start monitoring,” Van De Werfhorst said.

“We could start taking samples again, measuring and then if we start to see increases, we can contact public health and say, ‘we’re starting to see the virus… you may want to impose stricter guidelines to the public or just to let them know. Maybe you need to start increasing your capacity for testing or for hospital beds or medical treatment,’ that sort of thing.”