During the Montecito mudslides in January 2018, intense rainfall precipitated a deluge of mud and soil runoff to create a devastating debris flow affecting Montecito and nearby communities. 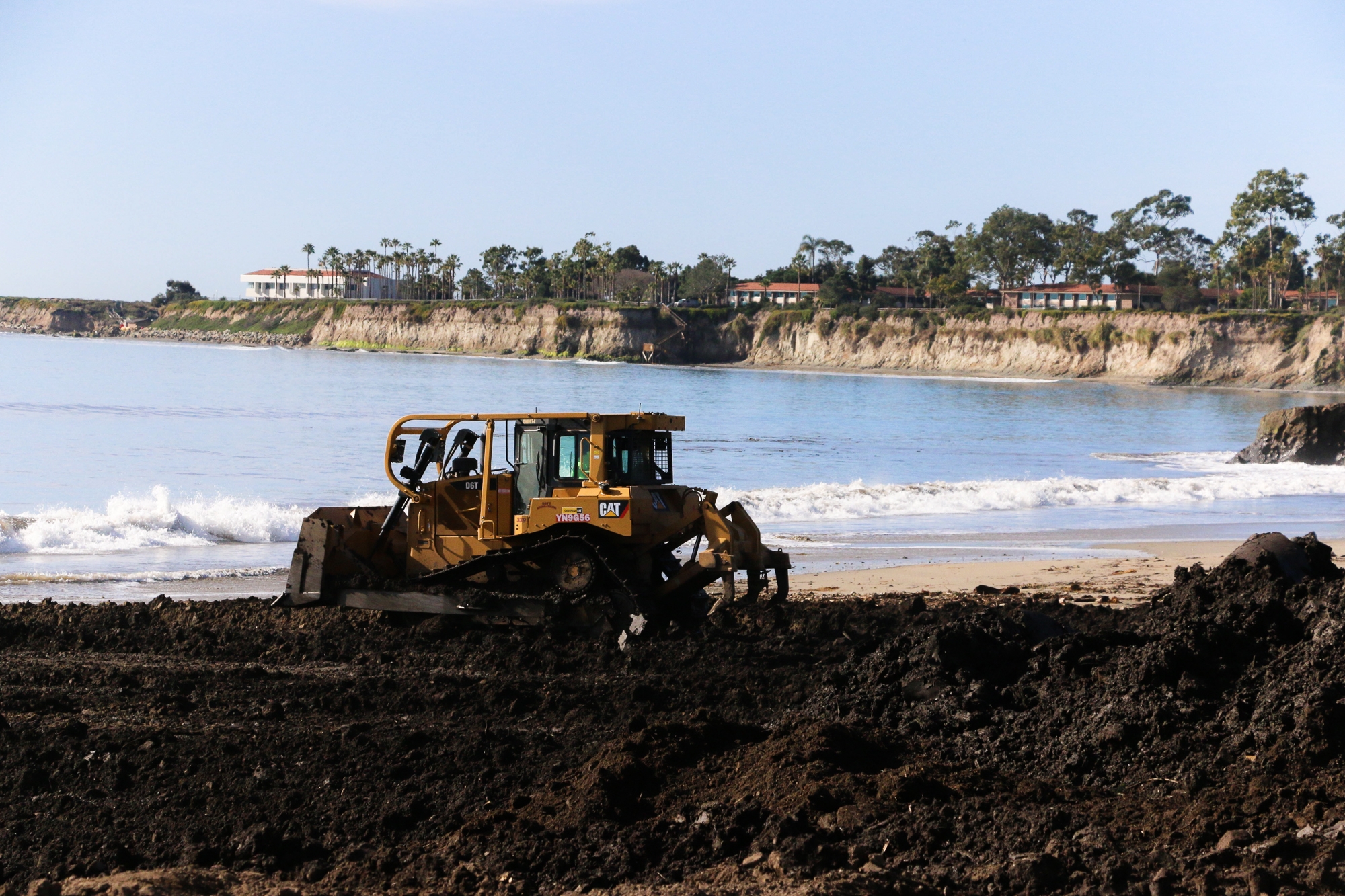 Investigators took regular samples as the sediments were being disposed of during 2018. Xinyang Miao / Daily Nexus

As part of the mudslide cleanup effort, the sediments were transported to several places, including Goleta Beach, for beach nourishment. Concerns were raised with regard to this emergency response and its potential effects on the environment, as high fecal indicator bacteria (FIB) concentrations were detected in the sediments. Significantly elevated fecal bacterial levels in the ocean water resulted in the closure of Goleta Beach for six months.

UC Santa Barbara researchers from the Bren School of Environmental Science & Management and the Earth Research Institute examined the possible impacts of the sediment disposal on the water quality at Goleta Beach. Their findings are published in Water Research.

“The risks of sediment disposal for human health were unknown when sediments were disposed of on Goleta beach,” Dong Li, the lead author of the paper and a postdoctoral researcher in environmental microbiology Professor Patricia Holden’s lab, said in an email.

The investigators took regular samples of the beach sediments and surf zone water while the sediments were being disposed of continuously onto Goleta Beach during January and February of 2018. With these samples, they intended to investigate the source of the fecal pollution as human or animal and evaluate potential public health threats.

The scientists analyzed the samples for FIB, pathogens, the bacterial community composition and DNA fecal markers that would reveal the source of the fecal matter. Their testing confirmed that the increased FIB concentrations in the sediments and surf zone were due to sewage contamination — perhaps to be expected, since damaged sewer pipes and septic systems in houses had released human waste.

“The concentrations of fecal indicator bacteria detected in the surf zone water matched well with the predicted level based on the input from sediments disposed of on the beach,” Li stated.

The disposed beach sediments deteriorated the surf zone water quality and altered the surf zone microbiology temporarily. In their samples, the researchers detected DNA sequences of intestinal bacteria, including numerous possible human pathogens able to exist in soil or water.

Most of the bacteria would not have been harmful to beachgoers, according to Li.

“However, if there were human pathogens in sediments, they might be able to survive in the environments for a while, so if people [did] swim in the surf zone, they might inhale some pathogens and get infected,” Li said.

After around 10 days since the initial sediments were deposited on the beach, microbial contamination decreased greatly, according to Li. The surf zone water quality improved, likely from the ocean currents bringing in fresh nearshore waters to the area. FIB concentrations also continued to drop after sediment disposal ceased. Approximately three months later, they returned to 2017 levels.

“The combination of several microbial detection and source tracking methods such as fecal indicator bacteria, human and animal fecal DNA markers, and microbial community sequencing [were] very helpful to reveal the human or animal sources of fecal contamination, and further evaluate the potential microbial risks for human health when such [a] natural disaster happens and a lot of urban disaster waste needs to be cleared,” Li said.

For many years, the Holden Lab has been studying the water quality of Goleta Beach and other coastal waters. Li and the other members are continuing to monitor the local water quality. Currently, the lab is beginning wastewater surveillance for SARS-CoV-2 in the Santa Barbara region.

Numerous partners enabled the team to conduct their research at Goleta Beach, including UCSB’s Coastal Fund, the California State Water Resources Control Board, the Montecito Sanitary District, Heal the Ocean and the California NanoSystems Institute.