The Daily Nexus
News
Mud from Landslides Moved to Goleta Beach, Tested for Safety
January 25, 2018 at 12:01 am by Stephany Rubio

Goleta Beach is being used as a sediment deposit ground for the Montecito mudslide cleanup effort, but contaminated sewage in the transported mud is raising issues for coastal water quality and ocean life. 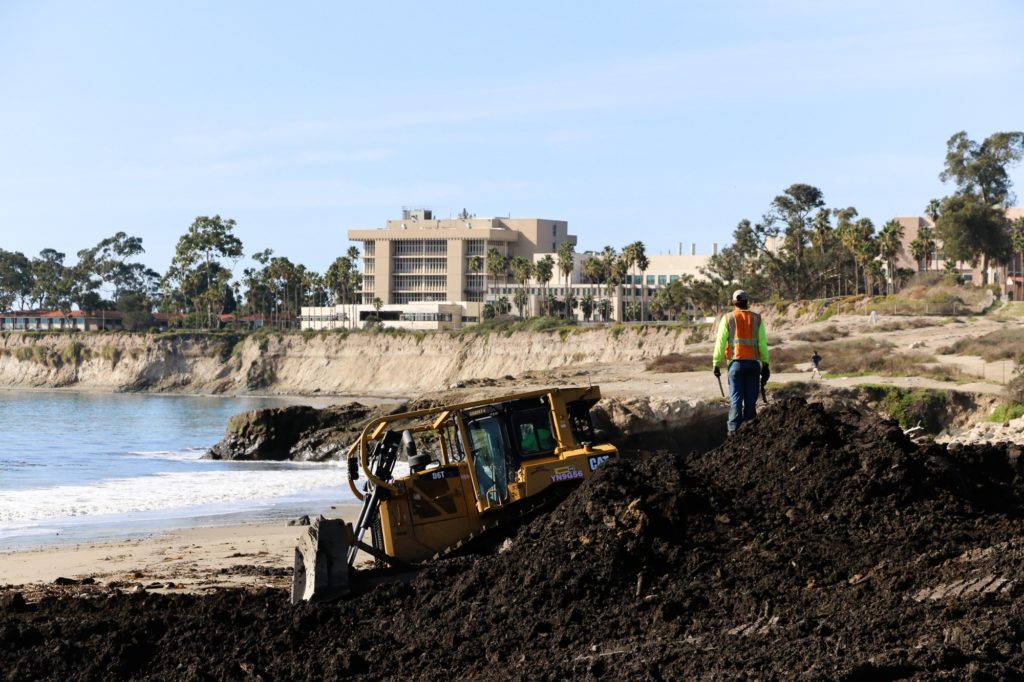 The sediment is made up of mostly sand and small rock mixed with debris, said Santa Barbara County Parks Department representative Daniel Gira. The debris comes from roadways, Montecito creeks and other affected areas in the Montecito mountains. A county permit calls for the disposal of some 300,000 cubic yards, which is the equivalent of 30,000 dump truck loads.

“We’re confident that the vast majority of the material is just sand and sediment from the mountains and creeks,” said Santa Barbara Channelkeeper (SBCK) Watershed and Marine Program Director Ben Pitterle. “In Montecito, certainly there was structural debris and some hazardous waste that was mixed into that.”

The mud disposed of at Goleta Beach is currently being analyzed in a local laboratory for heavy metals, organic compounds that are byproducts of wildfires and aquatic toxicity that can harm ecology.  Results of those tests will not be available until later this week.

“In terms of the impacts, obviously if it wasn’t for retention basins, bridges, creeks, etc., much of the sediment would’ve found its way to the beach in Montecito, under natural circumstances,” Gira said.

Santa Barbara County Flood Control conducted an initial screening of the debris and the contaminated soil is being bypassed by the central landfills.

Gira said local beaches were heavily eroded by the 2015-2016 El Niño season, so the sediment can be seen as a “real treasure,” because white sand beaches are naturally formed from catastrophic flows, floods and fires, along with the sediments they produce.

This is a chance for a counterpoint the mud effects, Gira said, since the sediment offsets the ongoing erosion.

“The county is doing its best to get as much of the sediment as possible into a littoral cell,” he continued. “And when put on Goleta Beach, it’ll work its way down the coast, feeding all the beaches from Santa Barbara to Ventura.”

Littoral cells are natural compartments on a coastline that complete cycles of sedimentation. These cycles sort through finer material like ash, which is carried away and deposited at the bottom of the ocean, while sand is retained on the beach.

“So, it’s a tradeoff,” Gira said. “So far, we don’t know about any obvious water quality impacts. Every measure in an emergency has been taken to prevent them. My understanding is that S.B. County Flood Control is also going to implement sediment quality monitoring of some type.”

The SBCK has done daily tests for fecal indicators of waters in disposal sites as well as local beaches like Campus Point at UCSB and Rincon Beach in Carpinteria. Santa Barbara County has conducted its own testing as well.

Pitterle said that as of last week, the county was no longer testing for contaminants. The testing was limited to visual monitoring for larger debris like wood or structural material, which is then deposited at different locations, including Ventura County.

Wildfires can affect the soil and water chemistry by decreasing nutrient concentrations, such as nitrogen.

“So you can end up with algae blooms in subsequent years and we may see some of that,” said Pitterle, referring to how the recent Thomas Fire triggered the mudslides by altering the landscape.

“I think what people are really worried about right now is the mud and toxicity — we just don’t have any answers yet,” Pitterle said, “Certainly, there are bacteria tests showing positive results for contamination, so we [SBCK] and county city officials are recommending that people stay out of the water at those beaches.”

Pitterle said the bacteria results are improving near Campus Point and the water quality has met standards in the last couple of days.

“We’re looking now for officials to address the muds being deposited on shore in other watersheds along roads or on other properties,” said Pitterle. “We definitely want to make sure that agencies are implementing what they call ‘best-management practices.’”

The SBCK is ensuring containment of mud runoff. That way, during the next storm, new creeks and waterways will not be contaminated with that material.

“A lot of it’s getting transported — I’ve heard as far west as Buellton. It’s in new areas that weren’t even impacted by the fire. We want to make sure those areas stay unimpacted,” Pitterle said.

Limited resources and testing expenses have been obstacles for SBCK when sampling beach disposal sites. Road closures have also made certain areas inaccessible.

“We are trying our best to balance our environmental concerns, many of which are valid with also the status of rescue efforts and emergency response that were necessary at the time,”  Pitterle said.

Correction: This article was corrected to clarify that heavy metals are not organic compounds, as the article previously stated due to an editing error. The mud disposed of at the beach is being analyzed at a local laboratory for heavy metals, as well as organic compounds and aquatic toxicity.