The Daily Nexus
Society & Psychology
Understanding the Social Implications of COVID-19
May 27, 2020 at 7:30 am by Anna Basa

In a shared effort, UC Santa Barbara’s interdisciplinary research centers, Novim and Cottage Health have begun a lecture series, “Issues, Approaches, and Consequences of the COVID-19 Crisis,” to offer insights into the scope of the virus’s impact in various fields of study. The sessions convene on Tuesdays from 1-2 p.m. via Zoom and extend until June 9.

The May 12 session, “Social Scientific Insights to Attitudes, Policies, and Coping with the Crisis,” featured Professors Heejung Kim, David Sherman and Robin Nabi. 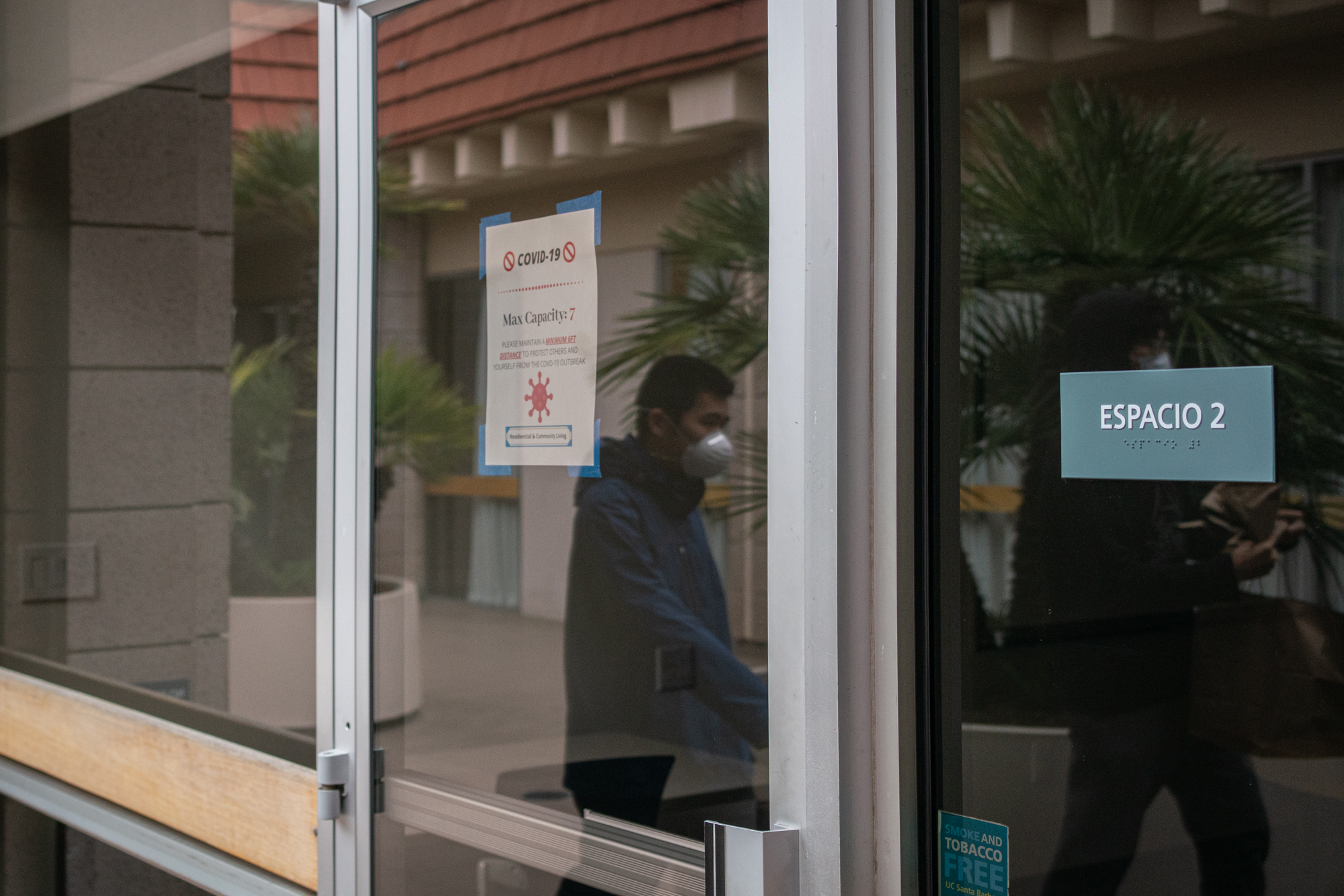 Researchers at UCSB have been hard at work studying the societal consequences of the coronavirus pandemic. Strict limits on indoor capacity are a very visible reminder that daily life has been upended. Sicheng Wang / Daily Nexus

The first of three lecturers, Kim, a professor in UCSB’s Department Psychological & Brain Sciences, described her evaluation of Americans’ xenophobic attitudes and tendencies in response to an increasing pandemic threat.

“Xenophobia is defined as fear and hatred of strangers or foreigners or anything that is strange or foreign … some scholars find [an] association between disease and xenophobia.” Including past infectious diseases like the bubonic plague, cholera and yellow fever, Kim highlighted the fact that each pandemic has been associated with a particular group of outsiders.

“There is nothing unique [to] COVID … at the social level people worry about keeping people outside and filtering their own group,” she continued.

As time went on and more cases of COVID-19 appeared, there was a pattern in Americans that manifested, “in psychology, the Pathogen Prevalence theory, states that living in pathogen prevalent locations make people more xenophobic.”

“Anti-semitic, xenophobic vandalism found on floor of east campus [at ], there was more generalized sense of xenophobic anti-semitic and anti-immigrant sentiments, et cetera,” she continued. 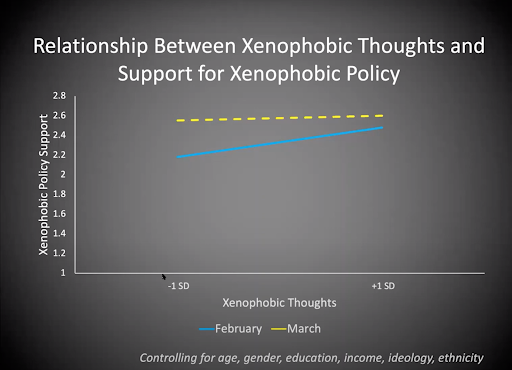 Kim described her evaluation of Americans’ xenophobic attitudes in response to an increasing pandemic threat. Courtesy of Heejung Kim

Using graphs that controlled for age, gender, education, income, ideology and ethnicity, she presented two graphs which visualized the relationship between xenophobic thoughts and xenophobic policy.

Kim examined these two facets of xenophobia over a period of time from February 2020 to March 2020 — the time COVID-19 was  only a distant threat in the United States and the time when it became an urgent threat (the country’s first stay-at-home orders were put in place then), respectively.

Xenophobic thoughts were measured with prejudice towards Chinese people and undocumented immigrants, and American ethnocentrism. Xenophobic policy support was measured  with support for a spectrum of xenophobic policies, such as quarantining all students from COVID-19 impacted regions. There was a strong positive correlation between xenophobic thoughts and policy support in February, but the correlation became weaker in March when the threat became urgent. Basically, in March when people were acutely threatened, even those people who do not hold xenophobic thoughts in general were willing to endorse xenophobic policies.
Kim suggested broader implications for these findings, “First, we need to be cautioned about the possibility of people supporting actions out of fear even against their personal values. At the same time, we could leverage this knowledge [of severe threats influencing policy support regardless of personal value] in implementing genuinely useful policies.” She pointed to examples of following shelter-in-place order despite valuing freedom as well as opting in to digital contact tracing despite valuing privacy.

In the second part of the lecture, Sherman, another professor in UCSB’s Psychological & Brain Sciences Department, addressed how politicians and experts influence policy support with specific regards to the coronavirus.

Briefing American responses to pandemics in the 20th century, he introduced a study written by prominent psychologists Irwin Rosenstock, Godfrey Hochbaum and Howard Leventhal around coordinating and understanding the government and public response to the 1957 Asian Influenza. “The Impact of Asian Influenza on Community Life: A Study in Five Cities” was a book that relayed the approaches taken by government officials in different countries, including the U.S., anticipating the spread of the disease.

“I was struck by how the national experts coordinated and executed a plan … Politicians, governors, played a limited role in the public announcements and behind the scenes planning. They’re mentioned but did not play a prominent role in communicating to the public what is needed.”

Sherman indicated, “This idea [of politicians not being at the forefront of pandemic response] is part of the Centers for Disease Control’s epidemic handbook and communication during a medical emergency.”

He described the impact of the party over policy effect in American politics, “A liberal policy will be favored by conservatives if it is said to have been proposed by republicans. A relatively stringent policy will be accepted by liberals if it is said to be proposed by democrats.” In a large online sample, his research group introduced two policies about the future of COVID-19 governmental response.

The study introduced people to two different policies, one centered on public health that emphasized maintaining shelter-in-place and social distancing for an extended period of time, and the other a more economic and public health focus that had a shorter time length for shelter-in-place and social distancing. The experiment monitored policy support from people for both policies in relation to the qualifier it was given “democratic, republican, bipartisan or expert support.” 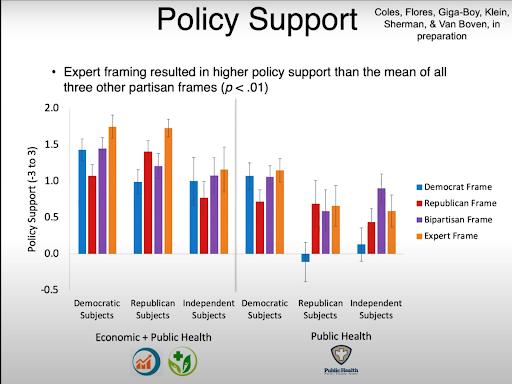 The study introduced people to two different policies, one centered on public health and the other with a more economic focus. Courtesy of David Sherman

The statistics concluded that people are most receptive to information from experts. Partisanship and bipartisanship are surpassed in credence by science.

Sherman stated a quote by Dr. Richard Besser of the Centers for Disease Control and Prevention (CDC). “If you have a politician on stage there’s a very real risk that half the nation is going to do the opposite of what they say,” he said. “We observed that in our experimental results.”

Nabi, a professor in UCSB’s Department of Communication, was the third and final lecturer. Her presentation centered on “Coping with COVID-19 Stress; Media use, coping efficacy, and social distancing.”

Interested in effective models to manage stress, Nabi named many of the numerous by products of the COVID-19 pandemic, “fear of illness, social and physical distancing, financial strain, relational strain, schedule disruptions, supply chain disruptions, enhanced uncertainty and anxiety” to isolate and recognize the problems people may face.

Nabi’s current research conducted a survey in the interest of understanding individuals’ stress and coping strategies as a result of COVID-19. She specifically looked into how this manifests in media use in contrast to other strategies, such as problem-focused strategies, used to address external problems like handwashing or emotion-focused strategies like meditation, used to decrease anxiety.

The first survey was conducted on 564 U.S. adults across the country, from March 20-24 this year, at the initial point of transitioning into social distancing.

“A lot of people are turning to media [use] to help themselves cope,” she commented. In the data collected during the survey, the reported No. 1 coping strategies for people shows a visual difference in the frequency of media use in comparison to the emotion and problem-focused strategies. 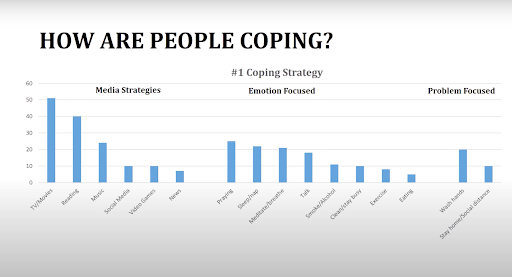 Nabi examined how media consumption has been used as a coping strategy in the wake of the pandemic. Courtesy of Robin Nabi

A statistical analysis was run on the associations of activities to reacting to stress from COVID-19.

“What is the frequency of consumption of different types of mediums to cope with COVID?,” she questioned. According to Nabi, the data collected suggested that people turn to media usage in higher volumes than other coping strategies.

According to another correlative model, “the more stressed people are the more they are watching television and movies, the more they’re listening to music and the more healthy they are eating,” Nabi said.

“Stress and coping efficacy related to one another on a negative basis,” however what she believed was imperative to note was that TV, movies and other media usage had an indirect relationship in helping people feel as though they were coping better with stress.

Nabi concluded with a few key takeaways. “There is a vast range of content that we can use to regulate our moods and escape and in this digital age,” she said. “There is value in news. When used in coping to obtain information, it can be a very valuable resource.”

You can stipulate a behavior in some inexplicable manner is correlated with the undefined happening called “thought”.

Psychology is not a science.