The Daily Nexus
Student Gov
Term in Review: EVPLA Christian Ornelas
May 21, 2020 at 9:00 am by Sofía Mejías-Pascoe

The Nexus has compiled profiles of our current Associated Students (A.S.) elected officials to reflect on their past year in office. Looking back on their campaign platforms, we asked our elected officials to tell us about their successes and shortfalls throughout their terms in office. The term in reviews for the other executives — President, IVP, EVPSA and S.A.G. —  can be viewed at dailynexus.com.

External Vice President for Local Affairs Christian Ornelas said the past academic year saw successes, shortcomings and surprises –– namely the coronavirus pandemic, which has forced the cancellation of schools and upended the normal ways of life. But he said as he worked to accomplish his platform points for his constituents, he realized that his usual approach to campus politics would need to change. 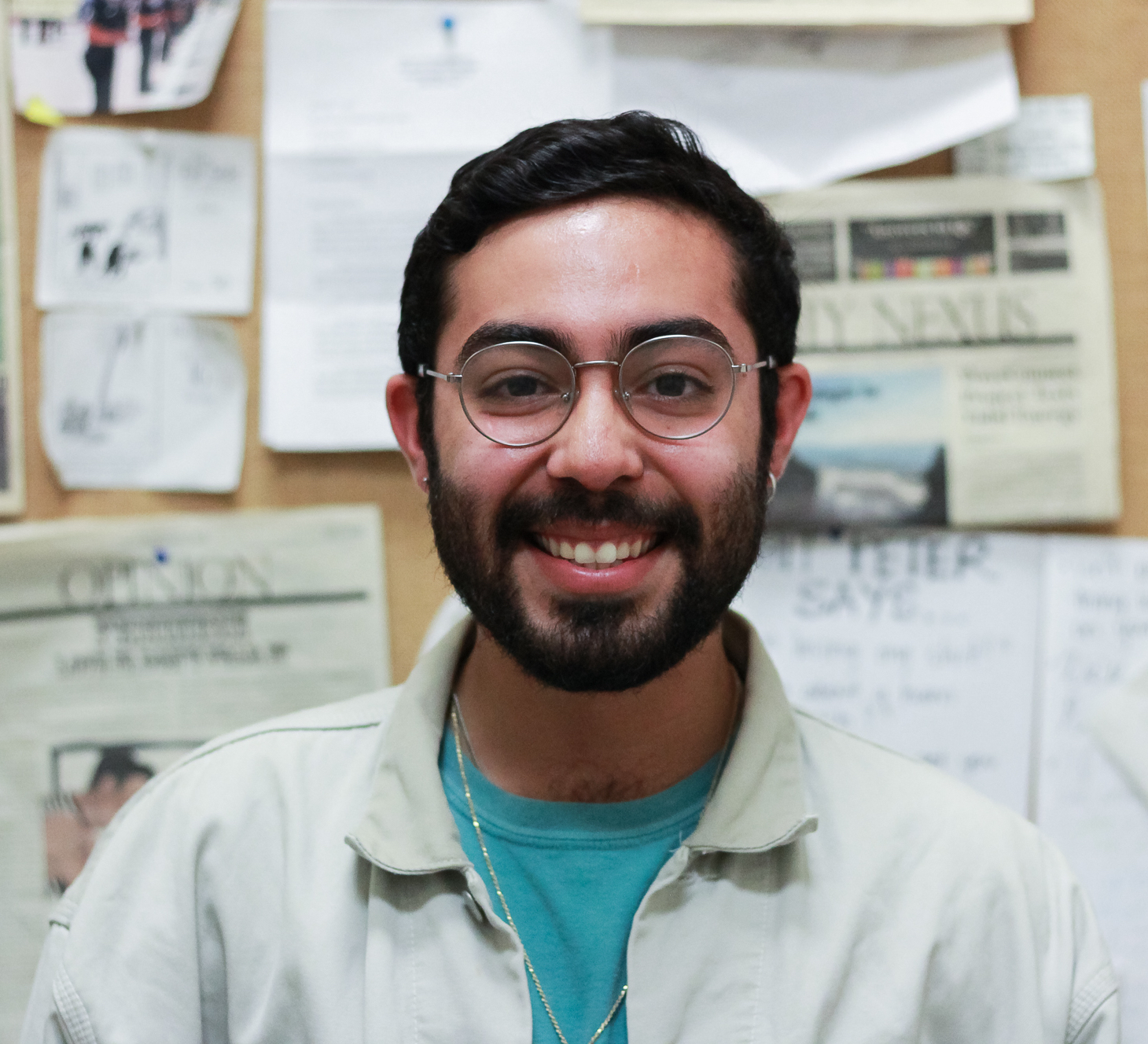 Ornelas was especially proud of the expansion of the market over his term, which included bringing multiple bands and increasing the number of participating vendors and attendees. Max Abrams / Daily Nexus

“The way I was last year as a senator, I was very like, ‘Okay, I’m going to ask any question, I’m going to push buttons because this is what I have to be doing. And I don’t care if someone gets mad at me or I’m just going to bring up these issues that I’m passionate about or that my constituents are telling me to,” he said.

Ornelas began his career in campus politics as a senator in the 2018-2019 school year. Now, he’s finishing out his term as External Vice President for Local Affairs (EVPLA) and preparing to pass on the baton to his successor, third-year political science major Yasamin Salari.

Over his year-long term, Ornelas said he learned to adopt a more restrained attitude and balanced approach to serving the study body. He said some of the best advice he received during his term was from Katya Armistead, UC Santa Barbara’s dean of student life.

“She told me ‘You’re going to have to learn how to choose your battles and if it’s something that you really want to go into, then give it your all and don’t look back,’” Ornelas said. “That’s not anything I was thinking about last year. Like last year I was just like, I’m going to call out anyone and see what happens.”

Besides his original platform goals — which included creating a monthly farmer’s market in Isla Vista, hosting special-topic classes co-taught by professors and students and solving mold issues in housing — Ornelas’ position as EVPLA required his participation in frequent student and administration discussions across campus.

Some of these discussions included higher-ups from the UC Police Department (UCPD) or UCSB administration, like Chancellor Henry T. Yang, and gave him a look into important conversations happening around campus.

“I was privileged to just [have] these really unique situations that students would never be able to be in the room for. I was the student that was allowed into the room. So acknowledging that privilege but also struggling sometimes with kind of feelings of imposter syndrome and stuff like that was really interesting.”

Ornelas said he dealt with self-doubt in some of these discussions and teetered between feeling the need to speak out and not knowing when to step in.

Ornelas said the pressure to please everyone was much greater in an executive position than as a senator. Over the past year, he said the balance between mollifying the university, serving his constituency and accomplishing his platform points proved difficult. In the end, he was not able to accomplish all of his platform points, including the co-taught classes, but he pointed to a few moments in his term that exemplified his commitment to serving students’ needs.

One of those includes the district supervisor town hall in February, organized by Ornelas’ office, that featured two of three candidates running to be the Third District Supervisor for Santa Barbara County, a seat currently held by Joan Hartmann. Ornelas said the event was important for I.V. residents to hear from the candidates, since “the supervisors literally determine so much for us.”

But he acknowledged the drama regarding the absence of one candidate, Bruce Porter, at the meeting. Porter initially planned to attend the meeting, but after some confusion surrounding the date of the town hall, Porter said he would not be attending and asked Ornelas’ office to reschedule the event. Ornelas responded to Porter saying that while his office would not be rescheduling the event, it was “very open to hosting another town hall event.”

“It was kind of one of those moments like, ‘Okay, we need to remain nonpartisan and just like not politicize this.’ And so our response was pretty much like, ‘We’re sorry [that] you can’t be here,’” Ornelas said.

Ornerlas also had success in organizing open markets in I.V. that brought music, vendors and services to Little Acorn Park once a quarter. He originally planned to bring downtown Santa Barbara’s farmers markets to I.V. to provide the same access to fresh produce, but decided that the potential collaboration would place too many restrictions on I.V.’s open market.

The EVPLA office instead sponsored the I.V. Open Markets, which had been operating independently since before he took office. The office’s sponsorship relieved the financial burden for vendors who participated in the market by covering deposits and paying for the park rental. His office also helped to organize the logistical elements, like waste and water services.

Ornelas said he was especially proud of the expansion of the market over his term, which included bringing multiple bands — such as Art Official and Careless Club — and increasing the number of participating vendors and attendees.

“There was a lot of planning that went into that and we had like thousands of people and like the most vendors we’d ever had and everyone liked the music,” Ornelas said. “That was kind of just a passion project that was really rewarding.”

One project he said has been his most impactful — and one that Ornelas hopes Salari will continue to develop — are the relationships he said he has fostered between the UCPD and the EVPLA office, which took shape in the development of the police collaborative board and other working groups. Ornelas’ predecessor, Jeike Meijer, helped to launch the program toward the end of her term in 2019.

Over the past year, Ornelas planned to use the board to address community members’ concerns about the allegations made in several lawsuits against UCPD, but the task proved more tedious and complicated than planned. Ornelas said his office had planned a community forum to facilitate discussion about the lawsuits, but after the coronavirus pandemic cancelled in-person classes at UCSB, the possibility for a forum thinned.

Still, Ornelas said his relationships, in particular with Community Resource Deputy Justin Schroeder and UCPD officer Ariel Bournes, produced benefits for the community in other ways, like discussions about safety for major events like Halloween and Deltopia, the promotion of the party registration program and the UCPD instagram account created by Bournes, who contacted Ornelas for advice about creating the profile.

While the coronavirus pandemic threw a wrench in many plans for this spring quarter, Ornelas said that as students’ needs shifted under the new circumstances, his office was able to meet those needs.

As for his successor, Salari, Ornelas said he hopes that she will be able to carry on the work that his office has put in place.

“We did a lot of the groundwork for the next EVPLA and a lot of it was already here for me too, so I’m hopeful that when Yasamin comes in, she can see the work that we had done and kind of start her term up with that,” Ornelas said.

He added that the next EVPLA’s term still involves some uncertainty as to how the duties will be carried out during a world pandemic.

“If we’re looking at the possibility of a remote fall [quarter], what does that look like for the next EVPLA?” he asked. “I’m not exactly sure.”

So… he basically did… nothing? Literally not one of his platform points was accomplished and did he even try to tackle mold in IV? Which I think was his selling point during campaigning. lol For someone who self proclaimed that his usual approach to his work centers around calling people out and criticizing, yet his proudest accomplishment was collaborating with cops? Which every EVPLA is supposed to do anyways? Hate to see it. :/

you must have a lot of fucking privilege if you think working with cops is easy. hate to see it. :/

no, i meant actually the opposite. I wouldn’t describe working with cops as a positive thing to be that proud of which is why i’m surprised that he’d say he’s happy about the relationships he’s formed with them. Why make that your main legacy that you hope is carried on for next year’s EVPLA if they’re already expected to do that anyways?

so proud of you christian!

this guy singlehandedly put on the most successful iv open markets and cultivated such a beautiful community between IV residents! thank you, christian!