UC Santa Barbara students and Isla Vistans filled the I.V. Community Room on Tuesday evening for a town hall featuring two of the three candidates for the upcoming Santa Barbara County 3rd District Board of Supervisors election, who will face the polls during the California primary on March 3. 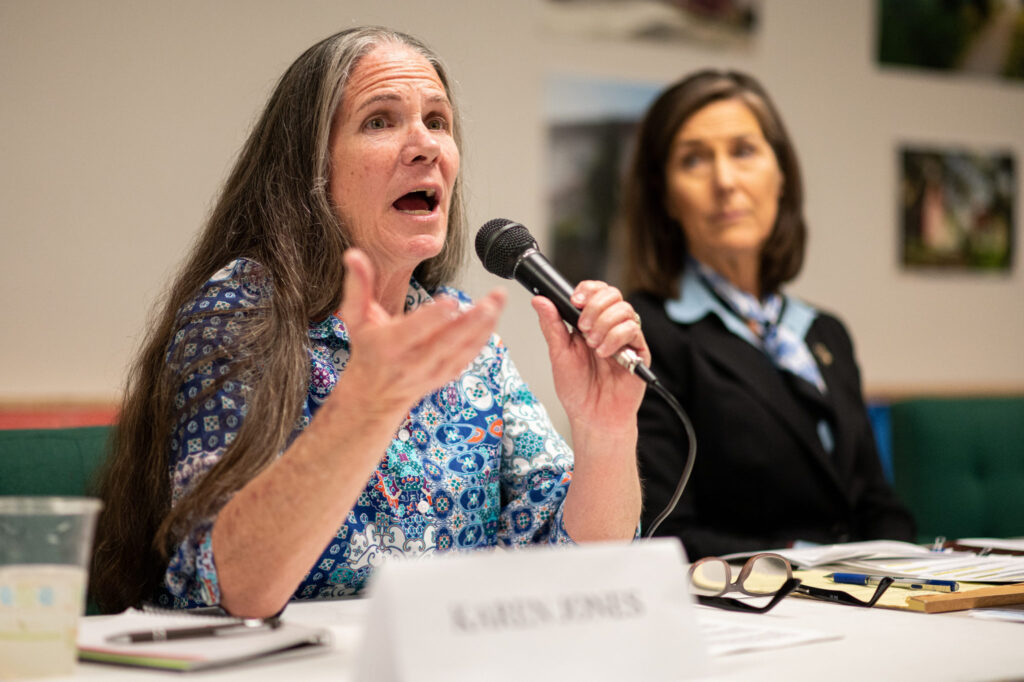 Jones positioned herself as a political outsider, emphasizing the deregulation of private businesses as one of her main platform points. Max Abrams / Daily Nexus

Questions written by attendees prior to the town hall challenged the 3rd District candidates — incumbent 3rd District Supervisor Joan Hartmann and Santa Ynez Community Service District Director Karen Jones — on issues including environmental policy, mental health and affordable housing in both I.V. and the Santa Barbara County as a whole.

Hartmann has held the 3rd District supervisor seat, which represents I.V. as well as parts of the northern Santa Barbara County, since 2016. I.V. composes nearly a third of the population within the 3rd District.

The 3rd District supervisor is typically a tie-breaking position on the board, with two left-leaning zones to the south and two conservative ones to the north. Hartmann is running as a nonpartisan candidate; Jones is running as a Republican.

The race’s third candidate, Bruce Porter, who also ran against Hartmann in 2016, did not attend the town hall. His campaign released a statement Tuesday afternoon requesting the town hall be rescheduled due to a “lack of communication among the organizers,” which includes Associated Students Office of the External Vice President of Local Affairs (A.S. EVPLA), Movement for Intersectional Collective Action (MICA), the Isla Vista Community Center, Gauchos Vote and the Beloved Community Isla Vista.

Christian Ornelas, the EVPLA, and Diana Garcia, an organizer with MICA, responded to Porter through a statement sent out later that afternoon, saying that while they would not be rescheduling the event, they were “very open to hosting another town hall event” that includes Porter.

Porter also later said in a press release that he plans on hosting a separate town hall in I.V. next week.

Even though Porter was not present at Tuesday’s town hall, his absence loomed over the event, as both Hartmann and Jones commented on his lack of presence.

“Tonight, Bruce Porter was going to tell you that he cares about you,” Hartmann told the crowd at the end of her opening statement. “But he didn’t show up.”

Although Hartmann and Jones disagreed across the board on a variety of topics, at the heart of their differences are their career paths.

As the incumbent, Hartmann emphasized her ongoing political experience with the Board of Supervisors and the projects she has spearheaded over the past four years since her election in 2016.

Jones, on the other hand, positioned herself as a political outsider, emphasizing the deregulation of private businesses as one of her main platform points.

“Joan and I have very different approaches to things, and the people who trust me are my friends and neighbors,” Jones said, repeatedly bringing up her working-class experience and lack of a college education throughout the night.

“Joan has spent a lifetime working in government and she’s met some really educated, neat people like herself, but they really are not the experts on innovation or the private sector.”

“Sustainable, renewable, predictably priced energy will be very important [for the economy],” she said, adding that clean energy would work as an appeal to bring larger companies to the northern county, both creating additional jobs and helping the environment.

Hartmann also discussed current composting groups and efforts to ban single-use plastics on campus and in I.V. as an initiative the county could also adopt to become environmentally friendly.

Jones did not shy away from her pro-fossil fuel stance and her own family’s connection to the oil industry in the northern county, which she views as a job creator.

“[Hartmann] talks about S.T.E.M. jobs, this is it. I mean fossil fuel production, those involve S.T.E.M. jobs, that’s not just a bunch of meatheads doing that. These are very sophisticated jobs,” Jones said.

“Fossil fuels are solar energy; that is stored solar energy, folks. That is through photosynthesis. The breakdown of plants become oil and we harvest it now for energy.”

On the issue of affordable housing, both candidates agreed there is a need for additional workforce housing, particularly in I.V., but differed on what the solution would look like.

Jones proposed cutting down taxes and reducing government regulations to make room for smaller developers to build more housing in the county.

“You can’t always keep fitting more rats in the aquarium,” Jones said, referring to the spike in UCSB’s student population over the years without a comparable increase in housing options.

Hartmann noted that the price of rent in Santa Barbara has increased three times faster than the cost of living and said she was “working hard to force the university to follow through on their required mandate” from the state to build more housing for faculty and students.

The candidates also addressed the cost-of-living adjustment (COLA) movements by graduate students at UCSB and in the larger UC system, which Hartmann said she supports. Jones said that she hopes the graduate students can work out a deal with the university but added that she dislikes using union tactics to do so.

The two candidates also provided drastically different opinions on the topic of equity and diversity in I.V.

“I also believe that our institutions must do everything they can to promote diversity and inclusion,” Hartmann said. “When I was a graduate student, I was the only woman in my class and there were no women professors at my graduate school.”

Jones responded, saying, “I don’t see color, I don’t see sexual orientation, I don’t even see sex,” and believes that no group should gain “special” rights. She added that she is “the only local person that is native-born, married to a guy who was born in the 3rd District.”

Another topic affecting both I.V. and the county as a whole is the legalization and regulation of recreational cannabis. Hartmann said she has worked to change county-wide legislation from a lottery to merit-based system when issuing cannabis dispensary licenses.

“People [have] said to me, ‘Hell no, we don’t want [a lottery system]. You go back and change the county’s mind because we want a merit-based system.’”

Hartmann said that she’ll be back in I.V. in the spring to hold a community meeting for residents to discuss what they want in an ideal cannabis dispensary applicant, and from there, will use that input to assess which applicant will fit the goals and needs of I.V. residents, a process that will “differ by community” across the county.Jones said she favors private businesses and deregulation in the cannabis industry and said she believes regulations get in the way of small businesses, like cannabis dispensaries, from operating.

Hartmann argued that county regulation of the cannabis industry was necessary, saying that without regulation, cannabis “can be quite contaminated and create a lot of problems for people in our county.”

Jones acknowledged in her closing statement that, as a Republican, she is unlikely to win many votes in I.V., but encouraged the crowd — some of whom occasionally heckled her during the event — to vote and advance her instead of Porter to the November ballot against Hartmann.

“You can get your friends and classmates to vote for me and it will not jeopardize Joan’s chances at all,” Jones said. “It will give her somebody that is a worthy opponent.”

During her closing statement, Hartmann reiterated her positions stated during the town hall along with some of the endorsements she received, including one from the recently withdrawn candidate, Jessica Alvarez Parfrey.

“I will continue to lead the just transition to a green energy economy with environmental and economic benefits, I will support a more representative and inclusive county government, I will fight for progressive causes including workers’ rights and environmental justice and I will protect your safety, our water resources, our open spaces and our climate,” Hartmann said.