The Daily Nexus
Sign of the Times
Trump is Not the Leader We Need Amidst the Coronavirus Pandemic
March 31, 2020 at 7:20 pm by Surya Swaroop 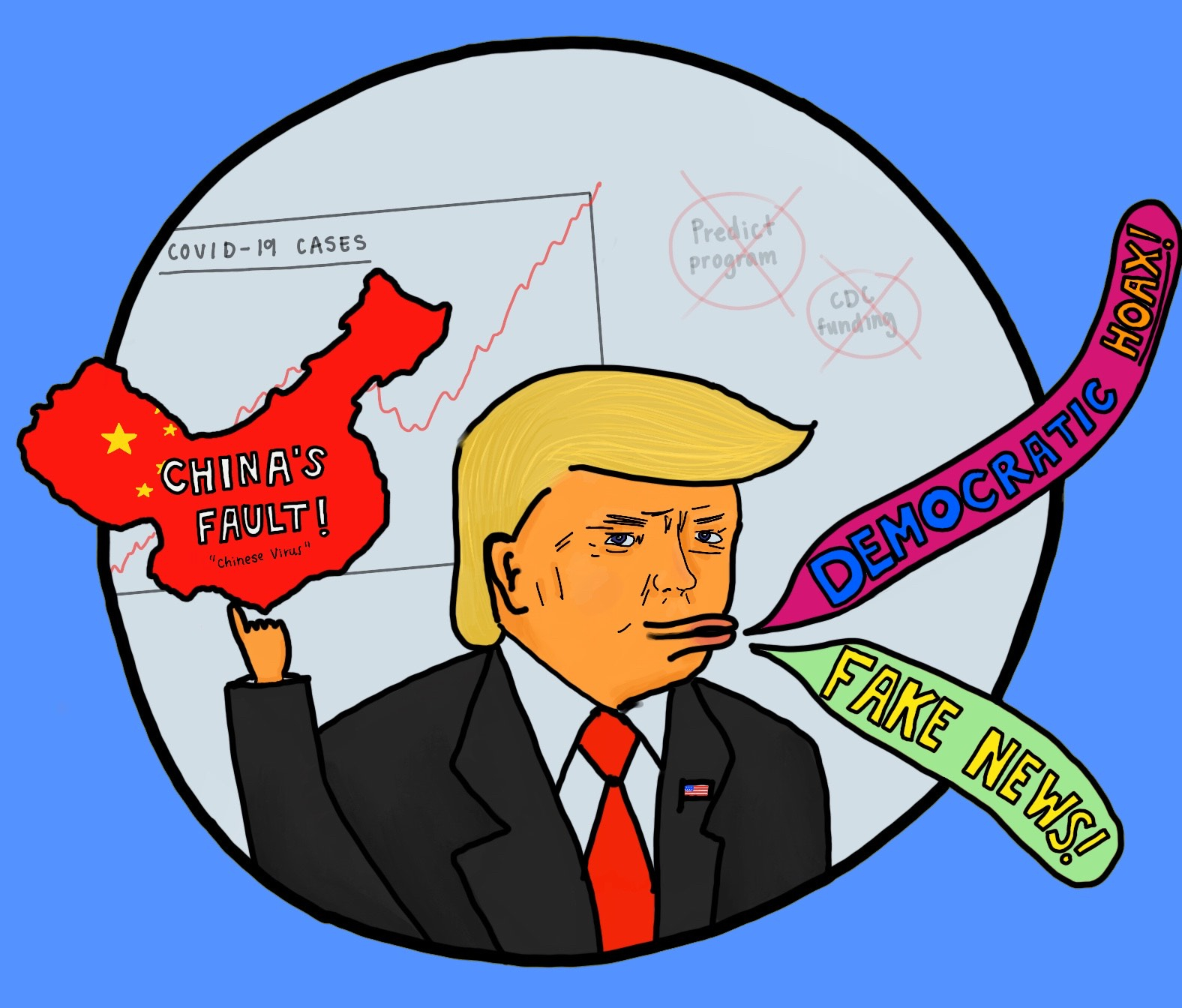 The past weeks have utterly shocked the nation as coronavirus has changed from an abstract entity to our new national reality. With the public health crisis gaining status as a pandemic, and more and more cases of those infected with the virus emerging both in the U.S. and abroad, this is a catastrophe that no one has ever experienced in their lifetime.

In such bleak times, it is natural that a nation would look towards its leader for guidance. Unfortunately for the U.S., Donald Trump has mismanaged this crisis from the outset. Although it appears that he is finally starting to grasp the severity of it, his initial denial and spread of misinformation has only made things worse. His poor leadership abilities have failed the U.S. in a time when it needs a strong president most.

Before the coronavirus was on anyone’s radar, Trump’s history as president has been problematic in terms of his efforts to curb preemptive measures designed to deal with pandemics such as this one. In 2005, the U.S. Agency for International Development created a program called “Predict” to help identify and research emerging infectious diseases in animals so that the nation could be better prepared for an outbreak. This program continued through both the Bush and Obama administrations, but the Trump administration shut it down in October 2019.

In 2018, the Trump administration fired the entire pandemic response team that would have greatly aided the nation during this crisis. In February 2020, Trump also proposed significant cuts to the Center for Disease Control and Prevention (CDC) and the National Institutes of Health (NIH) for 2021. Although no one could have predicted coronavirus, these programs were implemented for a reason and should not have been dismantled.

Trump’s poor leadership abilities have failed the U.S. in a time when it needs a strong president most.

When news of coronavirus broke, Trump repeatedly stated that the problem would go away and that it was not something we need not concern ourselves with. He has referred to the coronavirus as “fake news,” his trademark dismissal for all events that don’t align with his agenda. Trump has also stated that the Democrats’ criticism of his response to coronavirus is a“hoax” that was created to hurt Trump’s 2020 political campaign.

Trump’s utter dismissal of the threat of coronavirus demonstrates his thorough lack of preparation and education on the subject. Even when he was later asked if he regretted his word choice, Trump said no. He claimed that he was proving he was capable of handling the Democratic “hoax” because his administration is doing “such a good job” of handling the virus. This is simply not true, as the Trump administration has consistently fumbled its attempts to contain the spread of the virus.

In late February 2020, the U.S. government had to decide if 14 individuals from the Diamond Princess cruise ship who had tested positive for coronavirus should be flown home from Japan with a group of over 300 healthy individuals. The CDC strongly advised against this explaining that the infected individuals could easily spread the disease to healthy passengers. The US government decided to ignore this warning. Trump claimed after the fact that he was not aware of the government’s decision to do so, which is hard to believe. Even if that were true, that he would be so unaware of such an important decision is a blaring display of his incompetence.

Trump’s portrayal of coronavirus as the “China Virus” is racist. Trump is so worried about getting blamed for mismanaging the virus that he has resorted to pointing fingers elsewhere, carelessly fueling racial tensions in the process. We as a nation have unfortunately gotten used to Trump’s nonsensical rants, but this is especially unacceptable when time is of the essence and the country is in a state of full-fledged panic. We need a leader, not someone who is out to serve his own interests. Instead of guiding the U.S. through these trying times, Trump is putting Asian Americans at risk for hate crimes because he is so intent on deflecting blame. At the end of the day, this is an egotistical and self-serving approach because it does little to address the real problem and will do absolutely nothing to stop the spread of the virus.

Where Trump is concerned, perhaps there is comfort to be found in looking forward to the 2020 election.

One can truly see the extent of Trump’s failings by looking at how other leaders are handling the situation. For example, South Korea has also experienced a significant number of outbreaks, but their response was prompt and aggressive, unlike that of the US. The South Korean government made testing readily available in order to determine the number of cases and isolate those who were infected for treatment. The South Korean government was also more transparent with the information they presented to the public, with the effect of decreasing feelings of panic. As a result of these measures, South Korea has managed to slow the rate of infection. Testing in the U.S., on the other hand, has been more of a reactionary measure than the preventative one it should be and is still not widely available by any means.

Sadly, Trump’s ineffectiveness in dealing with the coronavirus is having — and will continue to have — dire consequences. The worst-case scenario for the US is 2.2 million deaths, an overwhelming amount of people lacking medical care due to a shortage of  hospital beds and doctors being forced to make heartbreaking decisions in terms of who to provide treatment to. The need for all these restrictions, including school closures and lockdowns, is to “flatten the curve” to contain the spread of the virus as much as possible. Our healthcare system does not have infinite resources and we need to be careful not to overload it. It’s also necessary that we try to make supplies last longer, even if that results in a longer battle against the virus. We need only buy as many resources as necessary while making sure that our neighbors also have equal access to them. Now is not the time to let panic take control and for us to hoard essentials like toilet paper and hand sanitizer.

Although it is easy to get distracted by the problematic nature of Trump’s leadership, we as citizens must do our part to prevent the virus from spreading. These restrictions are a hassle. Being asked to abruptly move out of Isla Vista and transition into online classes are huge disappointments, especially for graduating seniors. Unfortunately, this is a developing situation and one we must adapt to by practicing effective social distancing and good hygiene. Where Trump is concerned, perhaps there is comfort to be found in looking forward to the 2020 election. It will provide an opportunity for the American people to condemn Trump for the despicable way he is handling this crisis while using their vote to select a better leader for the future.

Surya Swaroop is dismayed by Trump’s ineffectual and racist handling of coronavirus and urges individuals to do their best to help contain it.

So, old Republicans have been going on Spring break and spreading the virus?

Solid argument. Kudos for your “insights”.

I bet thats you commenting lol. Typical solipsistic liberal crybaby. When the only tool you got is a hammer everything looks like a nail.

After reading your post I wonder if thought is your second or third language. Would go a long way in explaining the presentation of your alleged ideas.

BTW: — and I had to work hard to arrive at this (given the available material) — I am not the author of this piece. Great sleuth work sonny.

Oh, and what exactly is solipsism? I await your philosophically nuanced reply. Moron.

Exactly. All ethics of journalism is thrown out the window in this piece. Poor writing and poor research litters this article. Trump never called the virus a hoax, it was taken out of context. The “denial and spread of misinformation” actually came from the Chinese government who tried to cover up the virus to save face, punishing their own doctors who tried to warn the world. When did journalism become a watered down blog post that pulls quotes from its own piece as though it does anything to bolster credibility? What a narcissistic and ill-informed excuse for “writing.” Go back… Read more »

Trump made mistakes but so did many leaders on the left. Surya conveniently leaves out the fact that the very people in media who accused Trump of racism called covid-19 the “Wuhan virus” repeatedly until Trump said it and suddenly he was accused of being racist. Many leaders in NY afraid of being called racists encouraged everyone to go to social events like the Chinese Lunar Year festival. Trump also enacted a travel ban to/from China early on and was again criticized of racism. I come to a university paper because the idea behind universities is that it creates free-thinkers… Read more »