The Daily Nexus
On the Menu
Stuffed and Fluffed With SB Restaurant Week
March 4, 2020 at 12:57 am by Alexandra Leal Silva

Over the past two weeks, I have had the pleasure of hopping around Santa Barbara and trying a bunch of spots that participated in Santa Barbara Restaurant Week! With over 30 restaurants participating, there seems to be a never-ending stream of choices, no matter what you are craving. I wanted to taste as many cuisines as possible without taking too big of a hit on the old wallet. Two experiences that especially stood out in terms of taste and cost efficiency were Chase Restaurant and Eureka!

Located on State Street, Chase Restaurant is the perfect location to take a date or treat yourself! The restaurant itself is very cozy with fairy lights outlining the space. The decor reminded me of Christmas time, and with a rose on every table, the restaurant felt laced with the feeling of l’amour. Seemingly popular with folks of all ages, Chase Restaurant was buzzing for a Thursday night with wait staff hustling back and forth, all with a notable smile. Upon arriving and being seated, my date and I looked over our menus and gladly accepted the one for SB Restaurant Week. With the average pasta entree costing $20, we were thrilled to order from their prix fixe menu that offered three courses for only $25!

Chase Restaurant has an impressive wine list for all the sommeliers out there with lists of Interesting Whites, Interesting Reds and so on. They offered several cocktails as well which could be ordered from the table or their fully stacked bar.

We both started with a salad; I went with the caesar and he went with the house. When ordering, the waitress told me that folks constantly raved about the Caesar salad due to the fantastic dressing. I immediately knew what she meant. The dressing was creamy and well-seasoned, while not overpowering the salad. I found it to be the perfect appetizer before what I imagined would be a heavy entree. My date ended up finishing my salad for me and claimed that it was by far his favorite part of the entire experience. 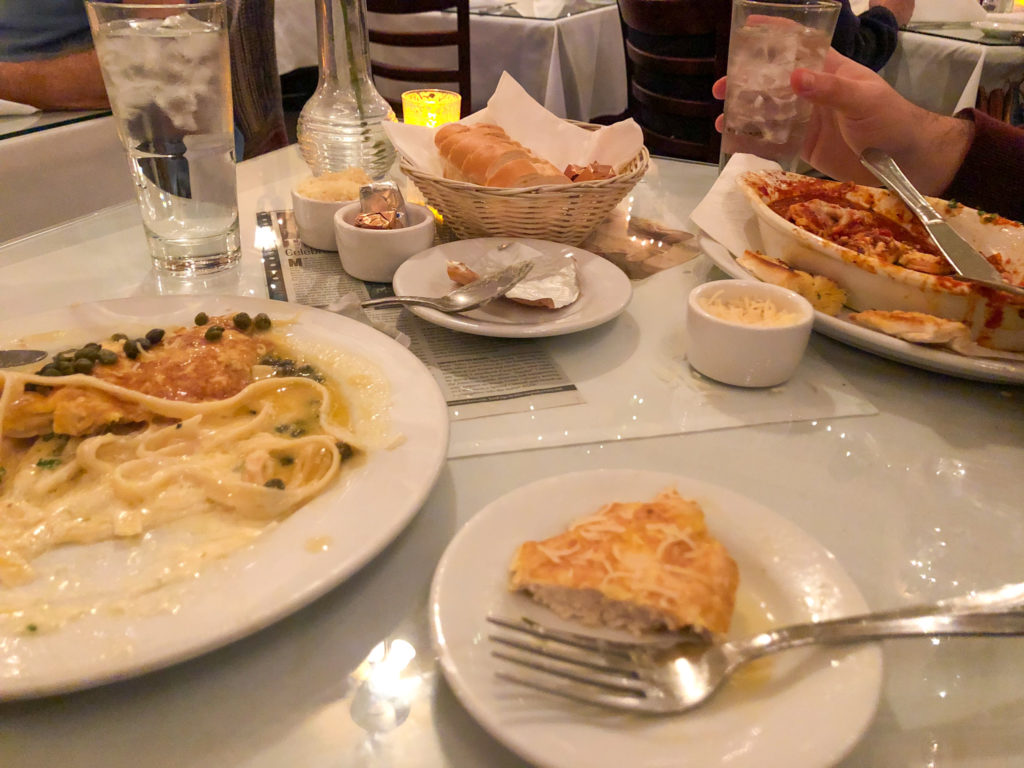 For the second course, my date went for the lasagna, while I chose their famous chicken piccata with fettuccine alfredo. Both dishes came out promptly and seemed to be the most popular dishes of the evening. The lasagna was well-cooked and quite cheesy but the sauce could have been more flavorful. The chicken piccata was moist and well-cooked. It had a gorgeous golden brown sear on it and the capers were delectable. Similar to the lasagna dish, the only problem I found with it was the sauce. Though some may be more inclined toward lemon, it has the tendency to overwhelm my palette. The presence of lemon was evident in the sauce and at times proved to be too much. However, I loved the inclusion of the lemon once I began eating the pasta. The fettuccine was al dente and the sauce was so incredibly good. It was obviously more of a cream base than butter and was rich in flavor and texture. The lemon element helped cut through the deep sauce and made it possible for me to nearly finish my meal. 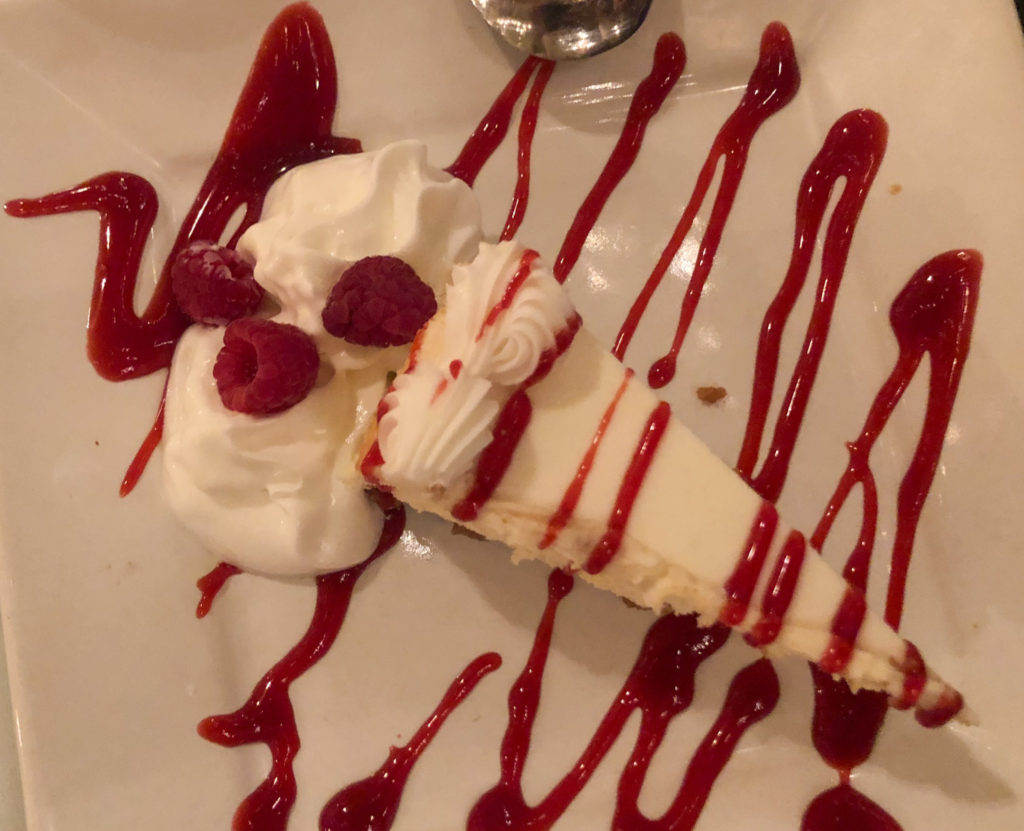 For dessert, we were sad to hear that the restaurant had run out of tiramisu by 7:30 p.m. due to its popularity. We decided to each get one of the remaining desserts: he chose the New York raspberry cheesecake and I went for a classic cannoli. The presentation of both desserts was so effortlessly appetizing, it was hard to ruin it by eating them. The New York cheesecake had zigzags of raspberry sauce and the cannoli mirrored it with zigzags of chocolate sauce. The cheesecake was creamy and the lightness of the whipped cream combined with the texture of the fresh raspberries created a party of flavor! The cannoli was the definition of decadent. A perfectly fried cannoli shell housed a wonderful cannoli cream and puffs of whipped cream with chocolate chips and powdered sugar that created a sugar dream.

Overall, the Chase Restaurant experience was tasty and for $25 a person provided more food than I could have imagined. It’s a beautiful location to spend quality time with someone you love and has food that you will fall in love with.

Over on the other side of State Street was Eureka!, a casual burger joint that provides anything but average. For also $25 a person, if you have a craving for burgers and fries but want to up your game, Eureka! is the place for you. Though this may seem like a more simplified menu in comparison to some other locations participating in SB Restaurant Week, the food is anything but simple. 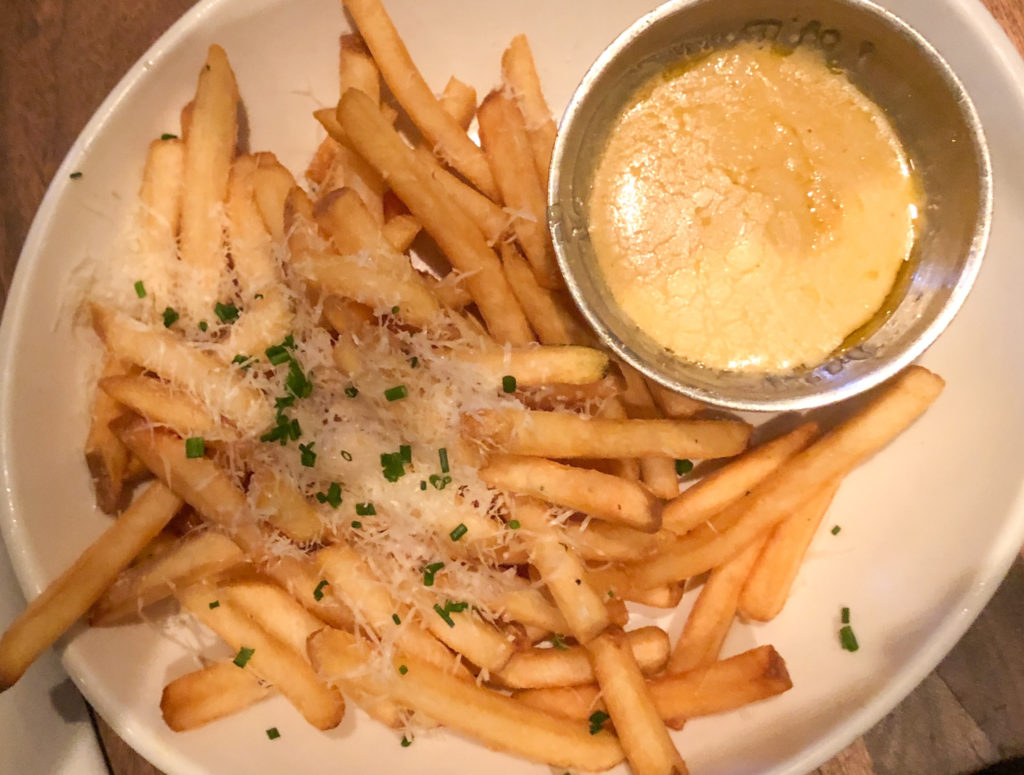 My partner and I started our meal by both ordering the truffle cheese fries. Truffle salt, parmesan and green onion cascade on top of golden fries that you can smell as soon as they hit the table. The truffle fries are accompanied by a white truffle cheese sauce that can only be described as heavenly. Though I would return for the entire menu, I am one day post-meal and I am already eager to go back and have another order of those fries. We could not express how delicious this entree was and the flavor profile was on another level. 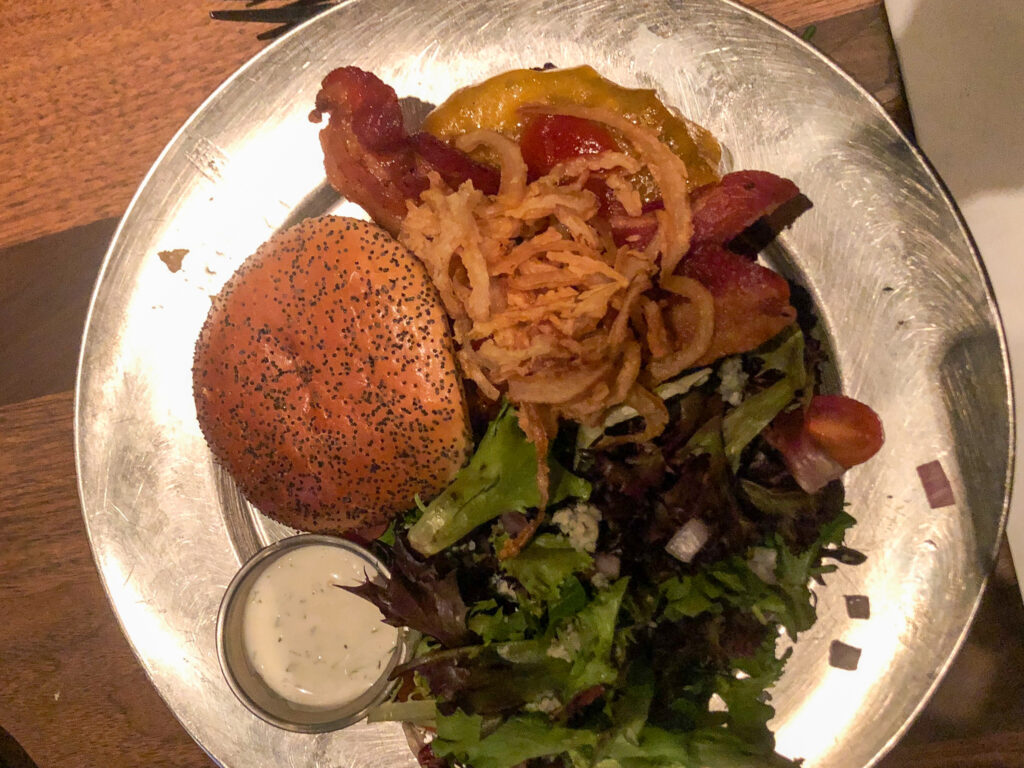 For the second course, we ordered a Fresno Fig Burger and a Cowboy Burger, both medium-rare. Though they both come with fries, we decided to upgrade our side for $2 and order side salads instead. There isn’t a choice on which salad to order but they do offer the dressing options of either ranch or lemon vinaigrette. We decided to try one of both! The burgers came within a reasonable time and we could not wait to dig in. The Fresno Fig Burger, featuring a fig marmalade, melted goat cheese, arugula and a spicy porter mustard, was everything we wanted it to be and more. The burger itself was juicy and cooked perfectly. The fig spread and goat cheese were delicious and the bun was buttery and beautifully grilled. The Cowboy Burger featured bacon, shoestring onion rings and a barbeque beer sauce. The bacon was crispy and the onions were a tasty touch with a nice bite. The barbeque sauce complimented the cheddar cheese very well and the burger was, again, juicy and exactly how I wanted it to be.

When it was finally time for dessert, we weren’t sure we had any room left but we powered through. We got one of each option: the Bonfire Stout Brownie and Bourbon Barrel Cake. Both desserts featured ice cream, a surprisingly nice palette cleanser. The Bonfire Stout Brownie featured charcoal ash and smoked paprika on its vanilla scoop offering an interesting flavor dynamic, especially when paired with the brownie. The Bourbon Barrel Cake featured a caramel made with, you guessed it, bourbon. It mixed very nicely with the vanilla ice cream and had pecans laced throughout that offered a nice crunch.

Overall, Eureka! offered a fantastic meal for a fantastic price. The atmosphere was casual and fun and provided a nice space to take family or a group of friends. We both took home leftovers that we can’t wait to dig into during lunch and have decided that we have to go back soon.

No matter what you choose, I am sure you’ll find an unforgettable experience during SB Restaurant Week. Restaurant Week runs till Friday, March 6 so get out there and get tasting!