The Daily Nexus
Sign of the Times
The Espionage Charges Against Julian Assange Jeopardize Journalism
February 19, 2020 at 9:29 am by Luke Hamilton 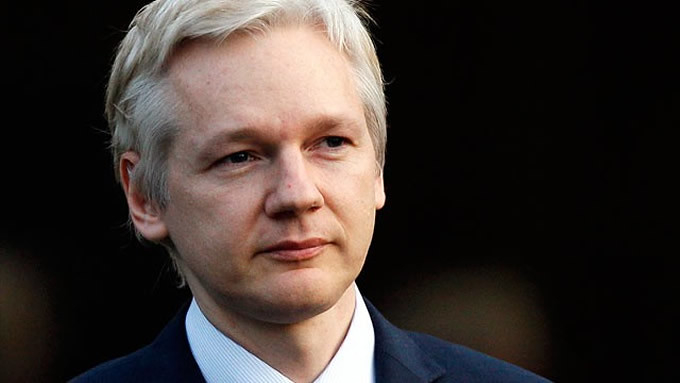 Few figures polarize public opinion like Julian Assange. As the founder and publisher of WikiLeaks, he’s achieved a level of bipartisan antipathy rivaling that directed at authoritarian dictators. After orchestrating one of the largest releases of classified United States documents in history — which revealed, among other things, undisclosed human rights abuses in Iraq and the U.S. and British government’s eavesdropping on former United Nations Secretary-General Kofi Annan — he became an enemy of several Western government officials.

In addition, the leaks likely caused increased civilian deaths at the hands of terrorists. After releasing nearly 100,000 emails from Hilary Clinton’s 2016 presidential campaign and the Democratic National Convention, revealing the DNC’s collusion against Bernie Sanders, he then became an enemy of many who had originally supported him (though there are exceptions) and shed the veneer of a neutral publisher, releasing information in the name of transparency.

As such, his notoriety is understandable.

But regardless of your assessment of his past activity, the recent 17 espionage charges brought against him sabotage the daily operations of investigative journalists everywhere. You don’t need to support Assange to oppose these charges.

The prosecution intends to use the first charge  — conspiracy to receive national defense information — to evade this criticism. If this charge sticks, it will open the door for conviction on the other 16. Previous writers noted the murky line between Assange and traditional journalist outlets, and under this very consideration the Obama administration didn’t bring such charges against him. If they had, they may have been compelled to charge co-publishers of the classified material, like the New York Times, El País, The Guardian, Le Monde and Der Spiegel for consistency’s sake. The Trump administration has apparently drawn this line and decided to call it conspiracy.

To argue that seeking out relevant classified documents constitutes conspiratorial espionage would violate the First Amendment.

Conspiracy is defined as “when people work together by agreement to commit an illegal act.” Thus, the prosecution must argue for the illegality of Assange’s interactions with Chelsea Manning while maintaining the legality of traditional journalist-whistleblower relationships. The crux of the case is Assange and WikiLeaks’ public and private solicitation of classified material. The idea is that this solicitation encouraged Manning to illegally disclose material, making both culpable.

Crucially, the prosecution fails to provide a clear definition of solicitation. Might a page on a news organization’s site dedicated to whistleblowers, like that of the New York Times or The Intercept be considered solicitation? One of the references the prosecutors cite is WikiLeaks’ “Most Wanted Leaks of 2009” list, an open-source document which lists specific files of interest. Some of these files are classified. The prosecutors might then consider criminal solicitation to include the listing of specific classified documents.

However, this is still concerning. Suppose there was reason to suspect illicit activity in a government program. The responsibility of a free press is to seek out this material. Publishers do, and should, solicit and publish material of interest, whether it is classified or not. To argue that seeking out relevant classified documents constitutes conspiratorial espionage would violate the First Amendment.

Beyond public solicitation, the prosecutors cite private communications between Assange and Manning where Assange expressed interest in further leaks. By emphasizing his awareness that Manning’s sharing was illegal, the prosecutors intend to indicate his complicity. However, calling this conspiratorial solicitation is problematic for the same reasons as above. The press isn’t legally obligated to respect a document’s confidentiality, particularly when the document concerns the public interest. Sometimes, confidentiality is appropriate and the content shouldn’t be communicated. Other times, there might be a moral obligation to do the opposite. In this instance, one of the things Assange and Manning communicated to the public was 15,000 unreported civilian deaths in Iraq. Perhaps in exposing such information, Assange and Manning were fulfilling an important social function as journalist and whistleblower.

This use of “complicity” effectively criminalizes investigative journalists for investigating national security issues.

WikiLeaks’ solicitation only differs from that of other media organizations by its degree. Criminalizing its actions criminalizes constitutionally protected speech and endangers other publishers, as they operate within the same category. If the prosecution fails to convict Assange on the conspiracy charge, they cannot convict him on the obtaining and disclosing charges either.

Some may reject my arguments here by stating that Assange isn’t a journalist or politically neutral. This is a good point because the First Amendment only applies to impartial, licensed journalists. John Demers, the Assistant Attorney General for National Security, elaborates: “Julian Assange is no journalist. This is made plain by the totality of his conduct as alleged in the indictment. His conspiring with and assisting a security clearance holder to acquire classified information, and his publishing the names of human sources.” With “conspiring” understood as solicitation and “assisting a security clearance holder” understood as attempting to support someone who is concerned for her own safety, the reference to Assange’s lack of redaction does raise an important issue.

In publishing some of the Iraq and Afghanistan War documents, Assange’s transparency led to the release of the names of civilian informants, endangering them to possible retribution. This is obviously concerning and should be taken seriously. And Assange did: he attempted to rectify this mistake in further releases by redacting, in some instances, even more information than the Pentagon and reaching out to the U.S. government personally before publishing the state diplomatic cables. Despite these attempts, the damage was already done. A couple months later, in the fallout from a leaked password to the U.S. state diplomatic cables, further damage was done when Wikileaks published the entire trove of the 200,000 state diplomatic cables online without redaction.

While his actions may be questionable and reckless, they still don’t qualify as espionage. If endangering civilians is the problem, charge him with endangerment and list the exposing instances. But such concern for civilian lives must be consistent. The questionable acquittal of alleged war criminal Special Operations Chief Edward Gallagher, who was accused of shooting indiscriminately at Iraqi civilians and stabbing a teenager in custody, is a glaring example of the opposite.

Don’t endanger a free press in the process. Not only does it set a dangerous precedent domestically, but internationally as well. Brazil’s Jair Bolsonaro is already taking notes.

Hi Luke. I have hacked your computer, your cell, and your parents devices as well. I’m going to send that info to the entire UCSB community. But, it’s OK, it’s just journalism.

Luke, you’re an idiot. I’m sure you’re the first to call fake news on all the mainstream real news. Go back to Russia.