The Daily Nexus
Nexustentialism
It's satire, stupid.
Decade Recap: Your 2010 Self Grossed Out You’ve Done Butt Stuff
January 1, 2020 at 12:00 am by Sam Penn 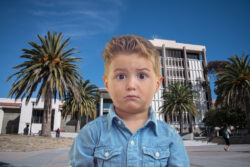 Using advanced, highly sensitive technology that we won’t bother to explain now, Nexustentialism was able to catch up with your 2010 self and fill them in on all that you’ve been up to over the past ten years.

Although excited by this and other updates, including the fact that you can use bad words without getting yelled at, eat junk food whenever you want and stay up past 10, your 2010 self was less than thrilled to learn about another thing you’ve been up to.

Your 2010 self didn’t calm down even after Nexustentialism told them you don’t do it, like, all the time, only a couple times, and that you kind of enjoy it.

“But that’s where my poop is!”

Nexustentialism’s update was cut short when your 2010 self insisted that they needed to return to 2010 to finish a book report, plus they had plans to scooter down their street later.

When he was 10, Sam Penn cried once when he realized he would have to see a vagina sometime in his lifetime. His 2020 self likes them just fine now.