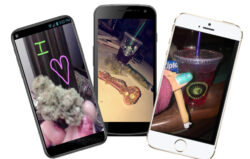 Local stoner Kelly Smith, better known by her Snapchat pseudonym “Phatty Dabz,” has recently been recognized by the community for the constant stream of smoking videos she uploads daily to her Snapchat story.

“You know, I used to do it for myself,” said Dabz, pausing to take a hit from her pen. “But now … it’s all about the people. Every morning when I wake and bake, I’m hitting my bong for the people. Unfortunately, my professors don’t understand that when I show up to class blasted out of my mind, I’m doing it for the people. I’m just a martyr. A weed martyr. Did you write that down? That sounds dope.” Dabz’s content has really struck a chord with some people. We interviewed self-proclaimed superfan Ben Ong to see what it is about these videos that resonates so deeply with the community.

“Honestly, it’s one of the only consistent things in my life right now,” claimed B. Ong. “When I wake up in the morning, I have no idea if I’ll have the motivation to go to class, if my unlocked bike will still be there, if my … anyway, there’s one thing I do know. I know that when I open my phone, there will be a fresh video of Dabz taking phatty bong rips, and that’s all I need to get out of bed in the morning.”

A ceremony will be conducted this Friday to commend Dabz for her service to our community. She will be granted a “Key to the City” (really just a key to Sweet Jane), and an honorary bachelor’s degree from the Film & Media Studies Department. Make sure to stick around for the raffle at the end, where they’ll be giving away a bong with Dabz’s face on it.