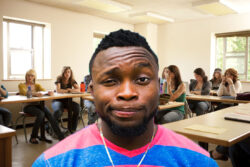 In a shocking but probably inevitable turn of events, the level of fucks given during section in Week Eight has dropped so low that not even the TA would answer his own question.

An 8:00 a.m. section of Greek myth faced their normally-peppy grad student TA this morning, fully prepared to be as mute and uninterested as ever before.

Following the usual, mundane “How was everybody’s weekend even though it’s no longer Monday?” bullshit, the TA (whose name no one in the class could actually tell us) posed an innocent reading comprehension question to the class.

The students assumed their natural positions of sleepy indifference, but they could never have anticipated the sheer magnitude of awkwardness that followed.

“The first minute or so was fine,” recalls survivor Courtney Sheridan, “but the way he just… looked at us. His eyes grew more and more dead, and his face started to turn this weird color. We looked around at each other, each one of us so scared because we realized he wasn’t giving up this time. It was… horrifying.”

After 47 minutes of prolonged silence, a rescue team was finally sent to the second floor of Girvetz Hall to save the students. The unnamed TA immediately returned to normal at 8:50 on the dot, but will be questioned in depth on why the fuck he didn’t just tell them the answer.

“Sure, I knew the answer,” admitted student, Greg Doodbreaux, “but what was I supposed to do, talk in class? No way, man. I’ve got a reputation to uphold — my beer die tournament is this weekend.”

A survey of the affected students revealed that most of them did not answer either on principle or because they were deadass asleep with their eyes open.

Only one fourth-year student, Patricia Blake, managed to escape the incident unphased.

“I literally just do not care at all,” said Blake.

Dyl Wheede has never had the “hot TA” experience and is super bitter about it.