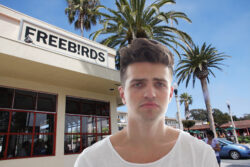 Local vegan Ian Greenberg shocked friends and family this week when he admitted that — as a vegan — he abstains from eating his own boogers.

“Like damn man,” said Ian’s close friend, Greg Santos. “But you know what? I have all the more respect for him. That’s dedication.”

Reports indicate that Greenberg became a vegan in 2016, after someone in his high school Green Day cover band told him to watch the movie “Cowspiracy: The Sustainability Secret.” Greenberg has sworn off all animal products since then.

“I started with meat, then eliminated eggs and milk. My own boogers were a natural transition from that,” Greenberg stated when interviewed.

As for the boogers themselves, Greenberg states that he doesn’t even pick them, saying that he “wouldn’t want to disrupt their natural system. Even if they’re grown cruelty free.”

Friends agree that Greenberg isn’t necessarily missing out on anything — except maybe a really satisfying pick in the comfort of your own solitude when it feels like there’s really something up in there.

Emma Demorest gets paid to write this and you little piggies just eat it right up.