“I don’t care about food,” Anderson Cooper told the Hollywood Reporter in 2018. His intimate confession made headlines but all things considered, isn’t that surprising. (This is, after all, the same man who once said, “I am not good at, like, sitting on a beach. I am not good at decompressing.”)

If not food, what then does Cooper consume? Meal replacement shakes: Soylent, specifically. Fortified with 26 vitamins and minerals — which is all that humans are known to need —  Soylent is purportedly the exclusive component of Cooper’s diet.

“I’m trying to replace all foods with [Soylent] because it would be, like, three fewer decisions in a day,” Cooper said.

It’s no surprise that meal replacements appeal to executives like Cooper. The streamlined nature of Soylent takes the preparation, inefficiency and, as Cooper emphasized, the decision out of eating. Gone is the concern for culinary variety; Soylent powder, which only requires 13 ounces of water before consumption, is thoughtless and removes everything people find annoying about cooking. 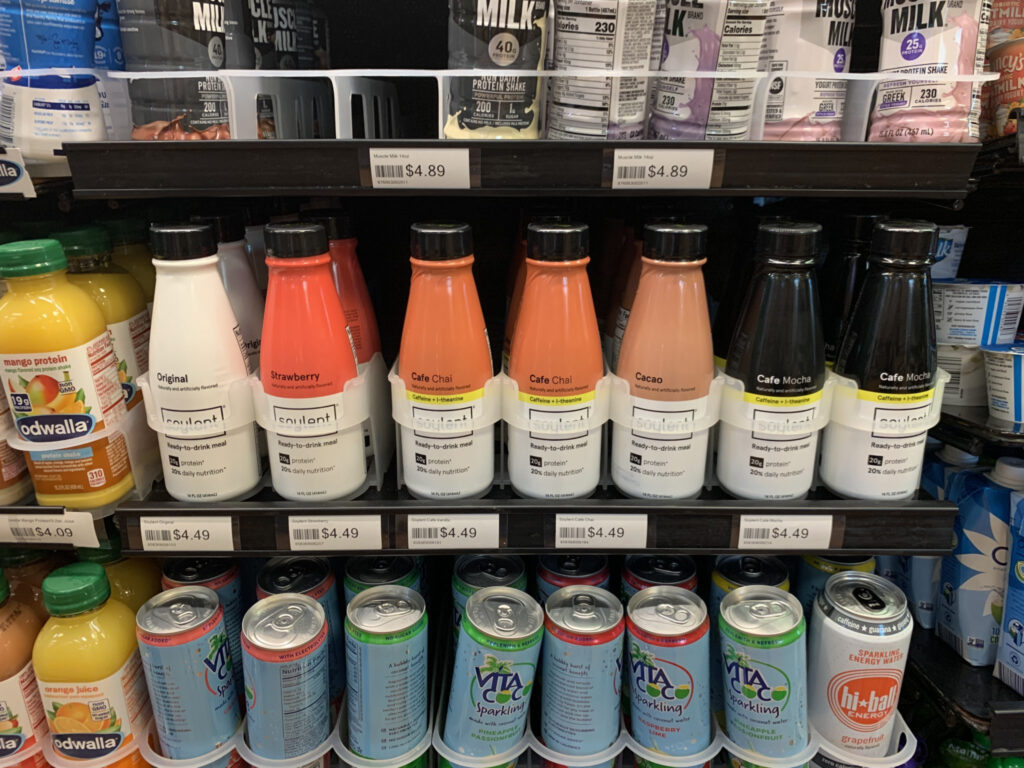 Uncoincidentally, Soylent is in high demand among workers in high-pressure, high-stress industries. Sales are particularly high in cities like Palo Alto, San Jose and other areas of Silicon Valley.

“The point of Soylent is … to provide sustenance, not taste,” wrote Keith Spencer, author of “A People’s History of Silicon Valley.” Some of Spencer’s research focuses on Soylent, which is considered to be Silicon Valley’s flagship food item. Professor David Golumbia, who collaborated with Spencer, attributed Soylent’s popularity among engineers to the drink’s flexibility: It’s food for people who don’t have time for food.

“I know exactly what to eat; I don’t have to think about it,” Golumbia added. “It’s a very algorithmic way of eating.” Ah, an algorithm — is there a better way to catch the attention of a tech mogul?

Elsewhere, reception to the drink isn’t quite as enthusiastic.

“That’s disgusting,” my roommate said. I had showed up to our dorm with two Soylent bottles: one for her, one for me. “That’s so messed up. You don’t like eating?”

I started drinking Soylent in my first month of college. People seemed to think that this stemmed from my ambivalence toward food but much to the contrary, I love eating. There was a period in my life where I would regularly dream about food. I memorized the operation hours for all my favorite fast-casual restaurants. I used to wake up in the morning and check the dining hall menu before doing anything else. They say you need to eat to live but for me, with much embarrassment, I sometimes think it’s the other way around.

So, why Soylent? I could lie and say that I’m a stickler for time management, that I aspire to acquire the work ethic of a Silicon Valley engineer, but to be honest, I’m just lazy. I hate cooking. The most advanced dish I can make is spaghetti, and I can’t even make that very well.

To be brutally, brutally honest? As much as I love good food, I just don’t care enough to cook it, so it was only natural that Soylent caught my eye. For someone like me, someone who is so lazy she once subsisted off of granola bars for two days straight, Soylent seemed like the hail-all solution to my dietary needs. Finally, something that put an end to the haphazard grocery trips and my anguish over meal prepping. It was food when food was the last thing on my mind.

When I started telling people about my new, self-prescribed meal plan, they were less than enthused. “You need to stop,” my sister said sternly. She asked me how midterm season was faring; I let it slip that I was on my second bottle of Soylent for the day.

I actually really, really, really did, although I see why she found it off-putting. Soylent, for one, is pricey. One bottle, which provides 400 calories of nutrition, costs around $5.

To put this another way, I checked my EBT spending history this month and nearly had a heart attack: $116.50 spent at the Arbor. It was a combination of Soylent and granola bars but, truthfully, it’s mostly Soylent.

Soylent is also commonly criticized for its taste, but my experience was the opposite. Soylent is a little bland as far as beverages go, but I couldn’t help but nurse an odd affinity for its subtle flavoring which blended into the backdrop of my day. Not great, but not unpleasant by any means. (My favorite flavor, by the way? Café Vanilla. Think of a Frappuccino but not as sweet.)

In his 2014 interview with “The Atlantic,” Soylent CEO Robert Rhinehart conceded that the taste can be disconcerting, although he is generally unapologetic in the engineering of Soylent. He theorizes that the perception of how Soylent tastes is purely subjective. “What I found is that a lot of people who like the idea, like the taste, and a lot of people who don’t like the idea are repelled by the taste,” Rhinehart said. “Because it has so little intrinsic taste, it pretty much comes from your expectation.” In other words, if you’re hell-bent on eating natural, whole foods and are alienated by the concept of a meal replacement, Soylent is probably not for you.

Those who are more open to the concept of meal replacements will be more optimistic in their initial perception of Soylent. As far as I can tell, this theory rings true: While many of my friends can barely stand the look of Soylent, let alone the taste, I don’t find it very offensive at all.

“[When it comes to food] there’s just an emotional attachment to routine and tradition,” Rhinehart said in defense of his product line, which is expected to amass over $10 million in the upcoming year. “We have technology that makes our lives better. It doesn’t make sense that you would keep technology out of this very important part of life.”

Rhinehart makes a fair point — does the adverse reaction to Soylent reflect a problem with meal replacements themselves or is it our refusal to let go of familiarity? Is Soylent controversial because it’s a flawed way of addressing our dietary needs, or is it because Americans are clinging onto traditional yet antiquated eating patterns?

You’d have to consult a nutritionist, a historian and a tech startup to get a completely well-informed answer.

I drank Soylent regularly for a good six months. It saved me a good amount of time from cooking and, physically, I felt fine. I still drink Soylent on occasion but have made significant efforts to cut back on my consumption, much to the relief of my wallet. In fact, I have started policing a new set of rules with myself: no replacing all of my meals with Soylent — or granola bars, for that matter. I try to only rely on it when I’m truly strapped for time, reminding myself that Soylent is, after all, a meal replacement.

It’s a surprisingly hard habit to kick. I stopped by the refrigerated section at the Arbor this morning only to look longingly at the meal replacement display — before turning around and forcing myself to get my grub elsewhere.

You, however, can buy a 14-ounce bottle of Soylent for $4.49 at the Arbor, or purchase it in bulk for $3.25 a serving on Soylent’s website. A variety of flavors await, among them cacao, strawberry, mocha, mint chocolate (a new release!) and, of course, the original Soylent formula. I’ve tried all of them, but like I said, save a bottle of the Café Vanilla for me.

21g fat per serving, banned in Canada for not meeting the requirements for meal replacement, Berkeley Wellness letter does not recommend it, so, yeah, seems great.