The Daily Nexus
The Daily Stench
Diversity Win: Sorority Has Two Brunettes AND a Redhead!
October 18, 2019 at 4:20 pm by Souper Fischial 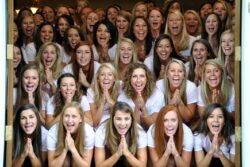 Sororities are known for many things — the cult-like, ahem, cute chants and hand signals, the iconic squat and, of course, a homogenous hue of golden-to-brassy heads. Brilliantly, however, UC Santa Barbara’s very own Kappa Ligma is taking a bold step in the right direction. This past fall rush valiantly defied the Panhellenic norm by bringing in two brunettes AND a redhead.

“I think it’s very brave of us,” Molly Auricomous said, who is planned to be the redhead’s big. “Like, this is not something you will see in every sorority. I’d like to think Kappa Ligma is setting a great example for sororities across the country.”

It is indeed a heroic, if not controversial, move for the sorority to make. Kappa Ligma, once a lowly middle-tier house, now occupies top house and has several frats trying to plan events with the newly dubbed “exotic” sorority, in addition to getting publicity from the highly esteemed and forever factual Nexustentialism.

When asked about all the positive commendations the sorority was now receiving, Auricomous assured Nexustentialism reporters that this was definitely about working toward equal rights for brunettes and the attention Kappa Ligma received was just a happy side effect.

“After all,” she said, “sororities have always been about sisterhood and benevolence and never anything superficial or attention seeking, ever.”