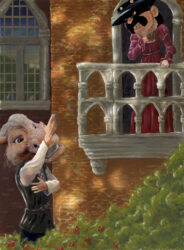 It’s the time of year when our beloved Blue-Green rivalry is in full swing. Soccer players are soccer playing, Gauchos are Loco-ing and everyone is perfecting their “Fuck Cal Poly” cheers.

But this time, there’s something besides tortillas in the air: love.

You heard it here first, folks. The rumors are true. Just days after the big UCSB vs. Cal Poly soccer game, Olé Gaucho and Musty the Mustang have been caught in an affair.

Their schools may be bitter rivals, but that didn’t stop these beloved mascots from kindling a forbidden romance. The two were spotted by students at last weekend’s big game, locked in a passionate embrace just outside Harder Stadium.

It seems that while all eyes were on the field, Olé and Musty only had eyes for each other. After what we can only assume was a beautiful and intimate dinner of stale tortillas and beer, one soccer fan overheard a tense lovers spat:

“We just can’t be together, Musty. It’ll never work.”

“Because you’re a caricature and I’m a horse?”

“No, because my whole school thinks you guys are buck-toothed, inbreeding Rednecks.”

Administrators and sports teams from either university refused to comment, but after much persuasion and a few rounds of “Olééééééé Olé Olé, Gauchos Gauchos,” our own sweet mascot spoke out about the affair.