The Daily Nexus
Nexustentialism
It's satire, stupid.
Best and Worst Majors by Smell
October 8, 2019 at 4:20 pm by A. Wiessass 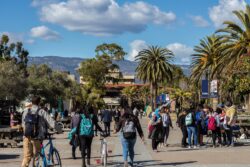 We have all had the experience of sitting next to someone in a lecture hall and being assaulted by the smell of your neighbor. While I firmly believe that anyone can stink or smell incredible, here are some generalizations on the best and worst smelling majors at UCSB.

Acting as an undercover CCS major this summer, I have made a startling discovery: these people are, on average output the most BO per capita out of any major at UCSB. People in the College of Creative Studies are often known for being overachievers and they carry this reputation over  into being fucking smelly. This phenomenon is exacerbated by the fact that no CCS classroom has AC and that practical application of deodorizing compounds is nowhere to be found in their curriculum.

I guess these people are too busy contemplating the metaphysics of reality to contemplate buying a goddamned stick of Old Spice. In my discussions with phil majors,  they clearly consider a lot, but I have found no moral dilemmas in taking a shower every once in a while. Our future philosophers should take a page out of Plato and Aristotle’s books and visit a bathhouse occasionally.

This is just because I miss my ex who was a PBS major :( … But my roommate is also a PBS major and she smells … pretty good!

These motherfuckers must synthesize their deodorant because I have never smelled a chem major that wasn’t an olfactory pleasure to behold. These people must have a direct link to the gods of scent, because there are scent combos I have never heard of creeping into my nostrils as I stroll by the chem building. Lavender French vanilla, goji berry coconut milk, Old Spice AQUA REEF!! Are you kidding me?! Calling these people scent icons would be a severe understatement. I declare chem majors “Aromatic Aristocracy.”

Wiessass is at least two of these majors.