The Daily Nexus
Nexustentialism
It's satire, stupid.
A Brief History of Storke Tower
October 1, 2019 at 4:20 pm by Emma Demorest 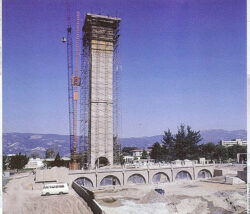 As many are aware, the idea behind Storke Tower came as a fever dream that then-chancellor Conrad H. Hornbreau had while fighting what would ultimately become a fatal bout of dysentery. Initially disinterested with the idea of building anything worth looking at on his university campus, Hornbreau had a change of heart when his neighbor, a Mr. Jean Fitsimmons, reportedly told Hornbreau one Sunday, “Your university looks as unkempt as your hedge of begonias.”

Hornbreau deliberated over many stately building plans, but it was what came to fruition in his fever dream that would become what we today know as Storke Tower.

According to family members, Hornbreau saw something he described as “like the thing in Washington, but girthier, and different” he then went on to say that the flat top of the building would “create the perfect landing strip for the balloon ships of the overlords when they come to use our human tears for smoothie juice.”

Those immortal words were to be his last, as he died immediately after uttering them. Out of a deep respect for the fallen chancellor, the building was constructed, and Hornbreau’s remains rest in the tomb beneath to this day.

Though Hornbreau’s predicted overlords never came, Storke Tower has served the school well in its 50 years. In 1973 it was used as a modern arc for local wildlife during Storm Denise (unfortunately no one thought to close the windows and all the birds flew out), and in 2005 was the centerpiece of David Blaine’s largest disappearing act, which would be known as the only trick Blaine actually did wrong (hundreds showed up to see Storke disappear only to watch a frustrated Blaine wave a small towel near the building, eventually giving up). In 2010 Storke Plaza was home to UCSB’s first Deltopia, where over 50 Gauchos attempted to live it up in the plaza pond, immediately contracting bird flu.

Storke has seen this and many more in its time as a UCSB centerpiece. Here’s to the stories yet to be told, old friend.

Emma Demorest has dedicated over fifty seven years of her life to Storke’s vibrant history.

Remember seeing Santana perform in Storke Plaza at the base of Storke Tower in the early 1970’s and watching the Tower sway during 1971 San Fernando earthquake, also known as Sylmar earthquake, struck the San Fernando Valley near Sylmar at 6:00:55 a.m. PST on Feb. 9, 1971.