The Daily Nexus
Nexustentialism
It's satire, stupid.
Breaking: The Boys’ Fat Clouds Cause of I.V. Summer Fog
September 10, 2019 at 4:20 pm by Ollie Tabooger 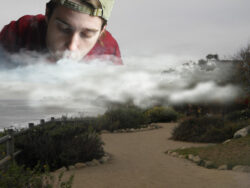 ISLA VISTA, Calif. – After weeks of research conducted by UCSB’s Department of Environmental Studies, scientists have finally been able to pinpoint the cause of Isla Vista’s unusually foggy summer. Empirical evidence collected over the Summer Sessions has shown that the true cause of the immense amount of haze in I.V. has not been caused by a unique environmental phenomenon, but rather because THEE boys just won’t stop blowing fat clouds.

“I didn’t have anything else going on for me this summer, so I decided I’d spend all my time vaping,” incoming second-year philosophy major Angus Björn said.

“And when we’re not vaping, we’re burning! Hahahah,” his housemate, Anton Chekovich, added.

Björn and Chekovich live in a garage with 10 other male students who collectively, as a result of all the vaping, share a total of 28 remaining brain cells. They lovingly refer to themselves as “The Boys.”

While The Boys share a special bond amidst a cloud of dense mango haze, they’re not the only ones who are contributing to the unusual fogginess of I.V. All over I.V. heaps of similar, nicotine-dependent young men who will definitely have heart attacks by age 30 just can’t seem to put down their vapes. Groups and groups of “The Boys” just can’t seem to stop blowing fat clouds.

“It feels so special to be a part of something greater than ourselves,” third-year undeclared major John Chadson said through his throat hole.

Chadson speaks on behalf of his boys, mostly because his boys have all lost the ability to speak due to the dangerous side effects that come from grossly abusing Juuls and Suorins.

Fortunately for those boys, Chadson is still able to communicate through the modified speaking hole in his throat.

“I always knew that if all The Boys came together like this, we could accomplish anything,” Chadson wheezed. “Now onto fatter clouds!”

It is not yet known if there will be any lasting environmental impact on the I.V. community due to the lack of sun, but only time will tell. With winter and its usual fogginess on its way once again with the changing seasons, it will be harder to tell if incoming fog is caused by The Boys or nature. The most clear way to know if clouds are from The Boys is by the presence of a light fruity smell, sometimes with a hint of mint.