The Daily Nexus
Nexustentialism
It's satire, stupid.
Breaking News: Freshman Girl to Have Fairy Lights, Photo of Boyfriend
August 22, 2019 at 10:33 am by Emma Demorest 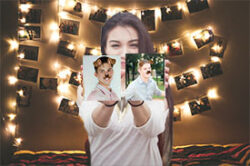 It has been reported that incoming freshman Nicole Romero will have an infinite string of fairy lights and at least one large photo of her high school boyfriend on her dorm wall.

The photo in question, which Romero will point to when referencing her boyfriend and telling new roommates and friends that she already has one, will be a printed photo from Snapchat. The filter she took it with? The kitty one.

Regarding the lights, Romero will have spent hours meticulously searching Amazon for the perfect set and will consider many arrangement variations when the time comes to put them up in her Santa Cruz triple. Romero and her roommate, Isabelle Luder, will have communicated thoroughly on the aesthetic of their room months earlier. Their moms will have spent upwards of $1000 at their local Marshalls to provide the necessary plastic succulents, polyester shag white carpet and tasseled throw pillows.

Nicole hopes the fairy lights will let everyone know she has excellent and even feminine taste and that it will complement the “dorm sweet dorm” sign erected on the hallway door.  Though Romero will often reference her boyfriend and FaceTime him at very inconvenient times throughout the first quarter, they will inevitably break up come January.

Emma Demorest is very very psychic but only for dogs.