The Daily Nexus
Nexustentialism
It's satire, stupid.
Confession: My Roommates are Subletting and I’m Scared
June 25, 2019 at 4:20 pm by Arthur King 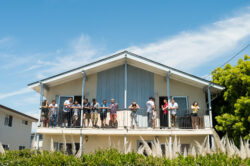 My roommates like to surprise me by not telling me any information whatsoever. I don’t even blame them; it makes life more thrilling. So, you can imagine my surprise when all three of my roommates said that their subletters are moving in as soon as the quarter ends! And no, I did not get to meet them first, which is a damn shame, because I’m super cool and really funny and anyone would be lucky to be my friend.

Instead of studying for finals, I have been plagued by anxiety-ridden thoughts about the strangers I’m going to be living with for the entirety of the summer. Seriously, it’s keeping me up at night, and as the move-in date approaches, my fears just keep worsening.

To say that I’m excited to meet these strangers is a gross overstatement. I am, in all honesty, scared shitless. There are some pretty terrible people in I.V., and I don’t think I can live with someone who doesn’t respect my rules. If you wear shoes in the house, that’s one thing, but not laughing at my jokes? Sorry, you’re going to have to move out ASAP.

My absolute worst fear is that I room with someone who thinks that they’re funnier than me. A lot of people think that they’re better at telling jokes than I am, but this is simply not the case. It is scientifically impossible to be funnier than me — a fact that is backed up by all of the scientists known to man.

Thankfully, none of my roommates this year turned out to be funnier than me, but they did turn out to be inconsiderate, hypocritical shitbags who don’t know how to communicate (or tell a joke). It’s okay, though. We’ve all had to live with people we don’t like at some point.

That said, I’m excited for what this summer holds!

Arthur King wants you to know that he’s funny.