The Daily Nexus
Opinion
The Politics of A Good Night’s Sleep
June 10, 2019 at 6:11 am by Kian Karamdashti

“Kian, no! We talked about this! Don’t do it! Don’t do it! If I see you close your eyes one more time, it’s lunch detention with me!”

Getting jolted awake by my first-period teacher in the middle of lecture is a memory I will always look back on with amusement. Despite the oddity of my teacher frantically sprinting at my desk, this was not an isolated incident. My friends always joked that I was nocturnal due to my nighttime habits. I had been removed from the starting lineup for a varsity soccer game because I had fallen asleep and was late to the team bus. I once fell asleep 10 minutes into a statistics test, slept through the whole thing and had to beg my teacher to let me retake it.

No, I didn’t have narcolepsy. I just didn’t sleep at night.

Sleep and I have never really gotten along. Well, let me reword that. Sleep’s cool — I don’t mind the occasional two-hour nap in the middle of the day if it’s needed. However, when it comes to getting the recommended eight hours a night, I’m just not a fan. 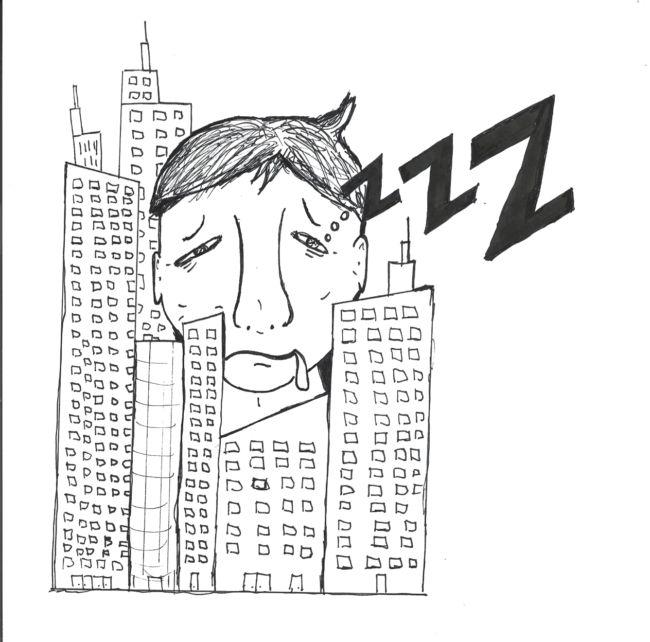 I’ve never been drawn to the idea of sleep. To me, it has always felt like a waste of the scarce time we have to be alive. If the average human sleeps eight hours a night, in my mind, that means a third of one’s life is wasted not being present in the real world. When I was little, sleep meant less playtime. Now that I’m older, it means less productivity. So I have simply chosen to minimize my time in society’s nightly coma.

Although this refusal to submit to sleep might sound like a serious problem, I wore that tag as a badge of honor. I guess I was proud of evading rest by squeezing every bit of life out of my day through sheer determination. I never thought of myself as the smartest kid, but I was definitely one of the hardest workers. Got a whole chapter of chemistry to learn in one night but also want to hang out with my friends? Easy, I’ll pull the all-nighter, still make 6 a.m. practice and pull off a good grade, all in the span of 12 hours. This feat became almost a weekly routine; I liked being the kid that got everything done. I liked being reliable enough to take care of things. I liked not missing a moment.

However, in my attempt to maximize the time I spent awake, I was actually hindering my quality of life by choosing not to rest. As I progressed through my late teenage years, I found myself coming down with the sniffles more and more, constantly forgetting things and not feeling present as I zombie’d through the days. All of these symptoms, alongside my sleep habits’ correlation with heart disease, stunted metabolism, stifled growth and depression, made it clear this was not sustainable for adulthood.

Looking back, I wish I’d slept more. The stubborn mindset I had adopted might have made me feel invincible when I was 17, but it was not a feasible long-term strategy. If I had slept more, maybe I’d be a couple inches taller. Maybe my teachers would remember me less as that kid who drooled on their desks. Maybe it would have pushed back my expiration date a couple more years.

Since coming to this realization, my sleep habits have evolved into something a human being can actually operate on. I go to bed at 2 a.m. instead of 4 a.m. I intentionally avoid early morning classes so I can sleep in. Overall, I have changed how I approach the act of slumber because I have realized how crucial it is to human functionality.

I am well aware I may not be sleep’s best ambassador, but as someone who neglected it for years, I can confidently say that our society does not value it enough.

Last week, Family Feud’s host, Steve Harvey, was videotaped preaching to his studio audience about the evils of sleep.

I am well aware I may not be sleep’s best ambassador, but as someone who neglected it for years, I can confidently say that our society does not value it enough.

“That’s a third of your life. It ain’t but 24 hours in a day. You cannot be asleep eight hours a day. You can’t live in L.A. and wake up at 8 o’clock in the morning. It’s 11 o’clock on the east coast. The stock market (has) been open two hours. They [are] already making decisions about your life and your ass was sleep…He who loves to sleep and the folding of hands, poverty will set upon you like a thief in the night.”

While the sassiest game show host in the world cursing poverty upon you for catching some Z’s is certainly funny, the mindset Harvey projects on his audience reflects a huge flaw in the American “pull yourself up by the bootstraps” mindset.

According to the National Sleep Foundation, adults between the ages of 18 to 64 should be sleeping between seven and nine hours a night to avoid health repercussions. However, according to Smithsonian magazine, 32.9% of this population report sleeping less than six hours a night, a trend that has been rising continually for multiple decades.

The long-term effects listed earlier alongside the short-term effects, such as reduced cognitive function and memory impairment, make a lack of sleep a dangerous entity to flirt with.

However, what makes Steve Harvey’s comments so confusing is how alarmingly wrong his declaration was. According to a study done by Tuck Sleep, there is a direct link between class inequality and the amount of sleep reported by study participants. As study respondents approached the poverty threshold, a higher percentage of the population reported sleeping less than the recommended seven hours a night.  Unsurprisingly, the income inequality underlying sleeping patterns also spills into racial inequality, with Hispanic and African Americans suffering from the highest rates of sleep deprivation. Turns out, a lack of sleep isn’t the secret to success — it’s a byproduct of poverty. Yes, Steve Harvey is right that the stock market is three hours ahead if you wake at 8 a.m. on the West Coast, but the stock market is rather inconsequential to an individual working two minimum wage jobs to provide for their family.

Turns out, a lack of sleep isn’t the secret to success — it’s a byproduct of poverty.

So, how can we fix this? It’s a complicated question.

It’s no surprise that the five countries where people get the most  sleep (New Zealand, France, Australia and Belgium) are all first-world countries with much more relaxed labor cultures than those of industrially-driven countries such as the United States, China, Japan and Singapore. These five countries have money, a healthy economy and less of a workhorse mentality throughout their general population.

For the United States, specifically, the cycle of generational poverty that persists has proven to be increasingly tough to break. Those born lower-class tend to stay lower-class. The American dream is actually not a myth — it’s just increasingly harder to obtain. This is a problem when the only chance for sleep’s progress is with a restructured economy that props up the lower class financially. From there, this discussion can snowball into debates on healthcare, minimum wage and the taxing of the upper class. It’s all intrinsically connected.

This problem is not going to be solved anytime soon, and I can’t say I’m very optimistic it will get solved at all based on the dramatic divisions within our government, the stifling progress that causes and the American attitude as a whole. Our society’s obsession with work is too entrenched. The people in charge of removing the economic barriers are more concerned with ulterior motives.

Regardless, just know that Steve Harvey’s rich ass was absolutely wrong. You should definitely sink into your pillows and sleep in that extra hour. It’s good for you!

Kian Karamdashti didn’t get out of bed till 12:36 p.m. today