The Daily Nexus
Sign of the Times
Liberalism vs. Open-Mindedness: No, They’re Not the Same
May 6, 2019 at 1:28 pm by Jordan Curiel

Gather round, kids, and listen to another unpopular opinion that will probably offend your modern, progressivist sensibilities but really needs to be said anyway.

These days, especially at a California university populated by highly educated young people, liberalism seems to be all the rage. A sense of pride surrounds the notion that this is a generation full of open minds.

Go back and read those two sentences again, because they are independent of each other — not mutually exclusive, but certainly not synonymous.

The great thing about millennials is the proliferating belief that acceptance ranks number one on the laundry list of things that are crucial to societal progress. But, as nice as it would be to count open-mindedness as one of the ingrained ideologies of liberalism, upholding that philosophy is much easier said than done. Equal opportunity, personal freedom, the right to choose, the right to diversity, the right to love who you love in the way that you want — these may be packaged into liberalism, but an open mind requires much more. 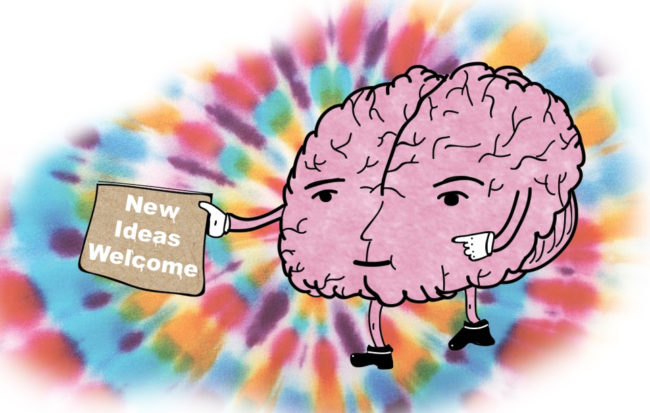 Being a liberal has become synonymous with accepting the world for what it is and the people in it for who they are. Originally, this may very well have been what every liberal stood for, but today, it’s a dangerous assumption. “Liberalism” has morphed into an extreme left-wing alignment, rather than a freedom-based political ideology as it was intended. To be clear, it’s today’s version of a liberal that I would like to look at.

Acceptance cannot be a one-way street. Allow me to be blunt: defining conservatives as the opposite of liberals equates them to evil, wrong and invalid… which is not exactly a recipe for peaceful interaction. This is where liberalism and open-mindedness can diverge, without proper care. A truly open mind must be open wide, to all possible perspectives, even to those it disagrees with. Boasting an open mind while continuing to condemn others — say, conservatives, for instance — based on their personal beliefs just does not add up.

This is the part of the show where a majority of readers have taken offense and are actively suppressing the urge to take up torches and pitchforks against the right-wing bigot-lover who wrote this article. If you could hold off for just a few more paragraphs, allow me to explain that everyone, regardless of political leaning or religious affiliation or race or gender or sexuality, should be practicing this if any effort toward a civil democracy is still being upheld.

Someone with an open mind does not have to agree with the opposite side of an argument, but they will still let any opponent speak their piece. The acknowledgement of viewpoints different than one’s own is Fair Play 101.

It boils down to realizing that humans disagree and two sets of values will never perfectly align, so all that can be done is recognizing the differences and accepting the rift that exists between the two sides.

A truly open mind must be open wide, to all possible perspectives, even to those it disagrees with.

Now, before those angry-mob-tendencies arise again, I will point out that lashing out against another person because of who they are will never be tolerable. Acting out of hate means forfeiting the right to hold an opinion without being criticized. Perspectives from all sides are valid, as long as they do not target another human being.

Story time: the sweetest, purest girl who has ever walked this earth attended the same elementary school, middle school, high school and now university as me. For 10+ years, we talked and laughed and developed a friendship, and wound up sitting next to each other in a course about American government. She almost never said a word, fearing the backlash that would rain down upon her innocent, conservative head from a class full of liberal Democrats.

She was the kind of girl to wear cross necklaces and was widely regarded as a literal angel. Leaving class with her one day, two boys on the sidewalk a little ways in front of us were holding hands, and then kissed.

She turned her head down.

Immediately, it made me nervous that my friend’s religion could be manifesting as homophobia, but years upon years of unwavering kindness encouraged me to give her the benefit of the doubt and simply ask if she was alright. What she told me is the epitome of my point and encompasses the moral of this article.

To her, yes, homosexuality seemed wrong because men were intended to love women and women to love men, and anyone who is now angry with her or condemning this girl who they have never met upon reading that sentence is free to stop here and never read my writing again because they are clearly missing the point.

She did nothing. She said nothing against those two boys.

Her philosophy put love and kindness first, as did her religion, and therefore the thought of holding someone else’s sexuality against them never crossed her mind. She did not align herself with same-sex couples because she had no desire to be in one, simple as that. If others chose that life, she could not stop them, nor would she ever want to try.

“Liberalism” has morphed into an extreme left-wing alignment, rather than a freedom-based political ideology as it was intended.

Trust me, I am very aware that people like her are rarer than a unicorn and a four-leaf clover combined, but hopefully spinning that little tale has cleared up my point and established what opinionated acceptance looks like.

Allow me to be entirely transparent once more: lately, it seems to me that a society which wants so fervently to accept the new, the interesting and the progressive is shunning an entire sect of the population.

I call myself a liberal — shocker, I know — but I also call myself a Catholic. Is that contradictory? It didn’t seem like it for the 17 years that I grew up going to church every Sunday with people who taught me to be kind to everyone, or when all I had to do was turn to my family for all the love and support I could ask for.

But sitting in my own apartment and being railroaded for belonging to a religion that, according to one “open-minded” liberal, could not possibly produce anything but pedophiles and Jesus-freaks? That did not feel so good. Hate speech is hate speech, no matter which side it comes from. How does a liberal shaming their roommate for being religious differ from a conservative who disagrees with someone else’s sexuality?

Nothing’s going to get better until both sides are open to accepting the other. No one needs to change, convert or renounce anything. Agreement doesn’t make for peaceful living, understanding does.

Jordan Curiel is prepared for all the backlash on this article because she’s a Libra and just wants everyone to get along.

Peoples’ politics reflect their morals and ethics. Of course it’s more than politics. Our laws and policies determine our moral actions. That’s why people get divided over politics.

Well put I have felt this way quite for many years. If we truly want a progressive society we must accept those whom we don’t agree with and try to educate and humanize the other side to them.

I think this is a great article; the one point I would disagree with you on is that your friend did do something (based off the context provided in the story). While maybe she didn’t taunt them or tease them, putting her face down because she doesn’t want to see them, because it makes her uncomfortable, is something. If they’re making out it’s one thing; pretty much everyone tends to look away from too much PDA. But if she’s only looking away from them because they’re gay, which this article is implying, that is still an action. She’s entitled to… Read more »

Funny, if you look up a definition of conservatism you will find “Conservatism is opposition to rapid changes, and promotes keeping traditions in society.” Originally, this may very well have been what every conservative stood for, but today, it’s a dangerous assumption. “Conservatism” has morphed into an extreme right-wing alignment, rather than a traditionalist-based political ideology as it was intended.

EXCELLENT ARTICLE!!! I too call myself a liberal, but am extremely disappointed by the so-called liberals hijacking the word. Best stuff I’ve read on the Nexus.

This is a great article! There was one thing that you touched upon very briefly, but kind of glanced over – the question of how a tolerant person should react toward hate speech or hate acts. This points to the Paradox of Intolerance, which says that a tolerant society should be intolerant towards intolerance, less they be swept up by the intolerant peoples to whom they are “giving a chance.” Essentially, I think you missed one crucial point that we cannot be tolerant to those who are intolerant of others, because they are not exhibiting the same qualities that we… Read more »

There’s a lot of “both sides-ism” fallacies in this article. The idea that, in every situation, there are two (and weirdly, ONLY two specifically) equally valid “sides” is just not true. Especially framed in the scenario given with your friend, who thinks that homosexuality is “wrong.” People, especially actual gay people, are not obligated to entertain your friend’s opinion that their fundamental existence is “wrong” just to satisfy some arbitrary, “two sides” dichotomy you’ve equated with open-mindedness. The “opinion” that gay people are human beings just as deserving of happiness and human rights as any other person is not an… Read more »

It’s very impressive how you found a way to contradict yourself so often in just a couple paragraphs. You state that “gay people are not obligated to entertain your friend’s opinion that their fundamental existence is ‘wrong’…” Fair, but the friend is not obligated to accept anything. See, when she chose not to say anything, she engaged in tolerance. Tolerance and acceptance are not the same thing and they don’t have to be. Here’s another good one: “It will never not feel like crap to know that certain people think your mere existence is wrong.” Who gives a @#$% what… Read more »