UC Santa Barbara’s Students for Justice in Palestine released a feedback form on April 4, asking the student body for public comment on a draft of a resolution to divest from companies that profit off of alleged human rights violations by the Israeli government against the Palestinian people. 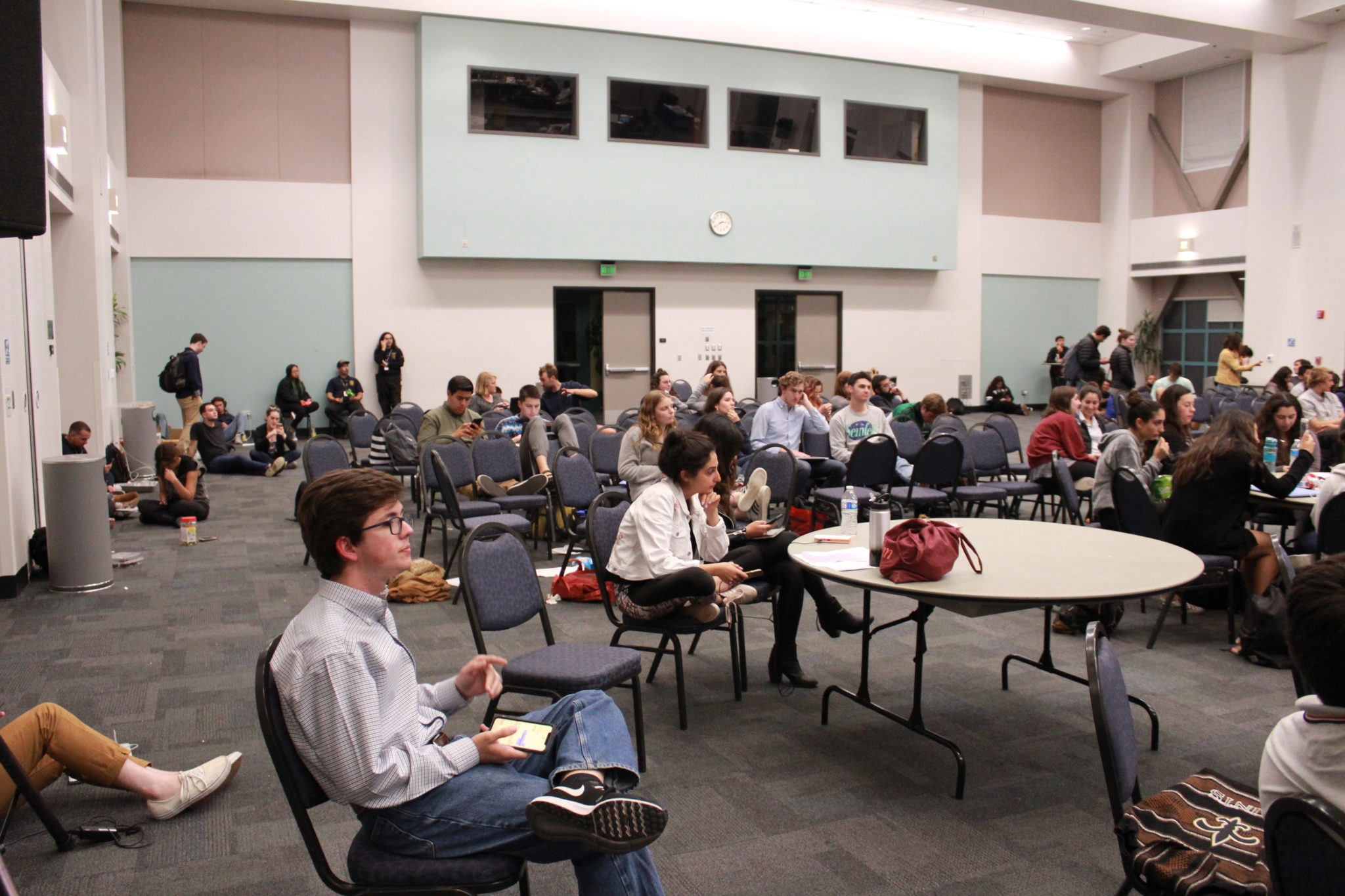 Divestment – a hot-button topic on campus that has, in the past, resulted in nearly 12-hour Senate meetings – has been brought to the Associated Students (A.S.) Senate table five times in the last six years. Each time, the meeting ended without a divestment, leaving UCSB as the only undergraduate UC campus that has not passed a resolution in line with the Boycott, Divestment and Sanctions (BDS) movement.

This year’s resolution is expected to be introduced at a Senate meeting within the next three weeks, according to Dylan Kupsh, an active member of Students for Justice in Palestine (SJP) and a candidate for the engineering senator position with the Isla Vista Party.

Kupsh added that there is a “pretty big chance” the resolution will be introduced at this Wednesday’s Senate meeting, but declined to confirm an exact date.

When asked which A.S. senators are going to officially author the resolution, Kupsh said the names will not be released until the day the resolution is introduced in order to protect the individuals’ safety.

“We’ve had issues in the past around Canary Mission, specifically student groups posting signs with their names and being terrorists and associating them with terrorists,” Kupsh said in an interview with the Nexus. “They’ll put the student sponsor’s name and they’ll say they’re a terrorist, and they’ll flyer all around the freshmen dorms.”

Members of SJP are primarily responsible for drafting the resolution, Kupsh said. SJP decided to release a feedback form for the first time this year in order to gather students’ opinions on the resolution.

“At SJP, we think that A.S. really doesn’t voice a lot of the concerns of students, and so we wanted to bring students into the conversation on, like, how these resolutions work and to get more student input on this resolution, ’cause obviously the university investments affect everyone at this university,” Kupsh added.

“We wanted students to have a voice in trying to make change on this university, so we thought to try to alleviate concerns about the divestment bill, it would be a good place to allow for student feedback on the bill itself.”

Kupsh said that SJP has taken into consideration the feedback that students have brought up about previous divestment resolutions and have used that to inform how they wrote this year’s resolution.

One of the biggest pieces of feedback SJP has gotten so far is to increase the number of sources they include in the resolution, Kupsh said.

SJP has also increased the number of companies to divest from and added several more clauses to explain why those companies are included.

Kupsh emphasized that the resolution is specifically targeting companies violating human rights and that the companies just happen to operate in Israel.

“At SJP, we really think this resolution isn’t really about religion; it’s about companies violating human rights,” Kupsh said. “It’s about Palestinians not being able to express what they want or having to fund their own oppression.”

Sanya Kamidi
Sanya Kamidi serves as the Deputy News Editor and before that was a Social Media Manager. Loves coffee and will find any excuse to miss class for the Nexus. She can be reached at skamidi@dailynexus.com or @skamidi on Twitter.
18 Comments
Inline Feedbacks
View all comments

Divestment is code for antisemitism , which runs rampant at UCSB.

This is bullshit. What is there left to do? Violence is condemned. Protesting is condemned. What more do you want? Divestment is the only means left. From Haaretz, “Due to the Israel lobby, the U.S. does not know the truth about what is happening here. Congress members, senators and shapers of public opinion who are flown here ad nauseam see only Israeli victimhood and Palestinian terror, which apparently emerged out of nowhere. Islamists, Qassam rockets and incendiary balloons – not a word about occupation, expropriation, refugees and military tyranny. Questions such as where the money goes and whether it serves… Read more »

If Palestinians would stop lobbing rockets into Israel, Israel would have no reason to retaliate.

You ever wonder WHY Palestinians send rockets into Israel dipshit? It’s because there’s a fucking BLOCKADE on Gaza. Israel STARVES Palestinians in Gaza. The United Nations agrees as well. You are literally deluded. Israel BULLDOZES houses and DESTROYS communities in the entire region. Did you forget about the 1948 War too where they made 700,000+ Palestinians refugees? Why don’t you google the Dayr Yassin Massacre or the King David Hotel Bombing — something Netanyahu is PROUD of. The Palestinians didn’t start this, Israel did, so shut the fuck up with your ignorant ass. Maybe actually visit the region without a… Read more »

Divestment is not anti Semitism although the Jewish Lobby likes to conflate it that way. The Israeli government can take a very long walk off a very short pier.

Ah yes, please use the excuse of antisemitism to justify the oppression, occupation, and genocide on Palestinians. The whole world definitely agrees with that idiotic logic.

Thinking about it, I could care less whether Israel exists or not, thanks to the Jewish American lobby.

No anti-semitic sentiments expressed in this thread (LOL).

The self-deluded (or simple liar) who argued for the need to separate attitude and policy needs some serious attention to his/her/its conceptual coherence (or just try to be honest — a potential long shot).

BTW> “I could care less” says exactly the opposite of what you seem to be wanting to say. I am hardly surprised.

Okay. You want things clearer. Israel (or the Palestine Mandate) was an artificial creation by the League of Nations before WW2 as a solution to Europe’s Jewish problem. The British got stuck administering it and in 1948 washed its hands of it. It’s been a festering sore on the Middle East ever since. The Israeli government is scum. Pure scum. If I had my druthers, the US would wash its hands of it and stop supporting it. Let the Israelis fight their own battles without the help of the West. Clear enough?

What is clear is your lack of honesty vis a vis your sentiments toward a people (i.e., for the challenged — you are a bigot).

Pathetic a so-called institution of higher learning provides a venue for such “discourse”. Reflects poorly (but, I sadly suppose, accurately) on their constituency (broadly construed).

Have a good one!

I don’t dislike Jews. I do intensely dislike the Jewish state called Israel. Stop conflating dislike a dislike of a government with dislike of a people. In short, bugger off.

You know nothing – The Palestine Mandate was established from the Ottoman Empire colony of Palestine and part of Britain’s spoils after WWI, not established as a solution to what you, like the Nazi’s, call the “Jewish problem” – what’s the problem – oh, yeah, they live! Anyway, the British gave the largest part of Palestine to an Arab tribe they were friendly with and it became Jordan. The small part left, which had Jerusalem and a Jewish, Christian and Muslim population, was then designated the Mandate. And the British blocked Jewish entry after Hitler came to power. So stop… Read more »

Palestinians have shown time and time again a willingness to work peacefully with Israel and not work with terrorists.
OH Wait that has never happened in any meaningful way. Instead Palestinians back Hamas and other terrorists launch rockets throw stones, dig tunnels to allow the killing of Israelis which are all peaceful conciliatory actions right?
Why no divestment from the Saudis way worse treatment of people- slave labor … but they are not jews so they are ok

We condemn Saudi’s too. Saudi Arabia is at fault for all their slave labor, all their wars, etc etc.

Do you follow the news? The US literally just condemned Saudi Arabia with a bipartisan resolution using the War Powers act for their killing of Jamal Khashoggi. Think smarter, not harder.

Where is the UCSB divestment proposal?
This was not talking about what the US govt does but what UCSB is going to do…
Try thinking then speaking you might be on topic. In your rush to be a condescending asshole you missed the point