The Daily Nexus
Nexustentialism
It's satire, stupid.
Student Asleep in Egg Chair Since 1992 Finally Wakes Up
March 8, 2019 at 4:20 am by Jordan Curiel 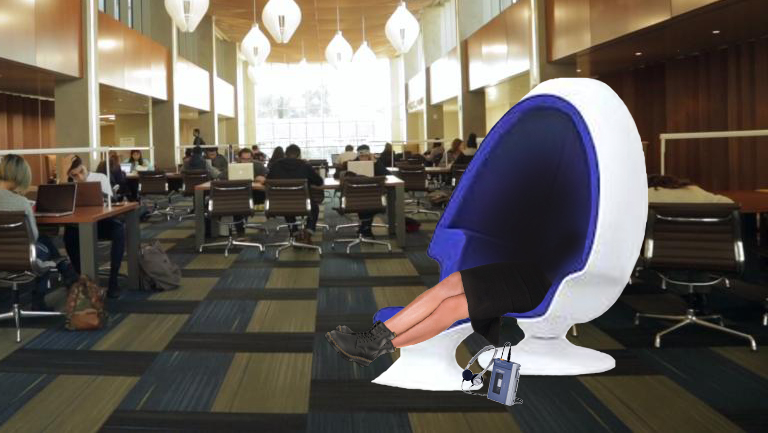 Dazed and confused but thoroughly reseted, that same girl you’ve seen perpetually slumped in one of Davidson Library’s egg chairs every single day since freshman year has finally woken up.

The breaking news flooded UCSB as soon as she first stirred, a sign of life so unexpected that it immediately captured the attention of the entire first floor which then, for the first time ever, actually got quiet. The vibrations of a hundred Airpods being pulled out at once could be felt all the way up to the eighth floor — or at least we assume so because everyone studying there complained about the mild disturbance.

Several Snapchat stories have recorded the precious moment she returned consciousness, capturing the alien-grizzly-bear-like moan as she stretched, and her first words: “Woah, wicked nap. Fuck, where’s my Walkman?”

Shannon Snoozman, now a 28th-year student, considers herself lucky to be alive. “I almost drowned in my own drool at one point,” she recalls. “Totally gnarly, but at least they fixed my back.” She wears a specially designed brace to correct her spine after nearly three decades in the ‘finals week slump’ position.

Though a power nap of this caliber has never been documented before, semi-dead students frequently fall under the egg chair spell. Anyone visiting the mountain side first floor is likely familiar with unconscious egg chair occupants such as Hood Up Headphones In Guy, Chick Who Brought Her Own Blanket and the always thrilling Dude Who Somehow Is Mysteriously Missing One Shoe. Snoozman takes the title for most ridiculously long stint in an egg chair and, after briefly considering charging her monthly rent, Davidson Library has decided to honor her marathon sleep by featuring it in the next photo series display by the elevators that no one ever bothers to look at.

“Wow,” Snoozman muses, “2019, huh? So while I slept I racked up 27 years’ worth of tuition. That’s gotta be, like, at least $100,000. My mom’s totally gonna flip.” At the request of her doctors for fear it would cause a heart attack or immediate death, no one has explained to her that today $100,000 would only cover two text books and a Scantron.

Snoozman, eager to embrace the new millennium, had some questions of her own. Her inquiries centered mostly around the phenomena of iClickers and internet memes, which she now fervently desires to take a class on, but circled back to the enormous clusterfuck that is our current political climate.

“I was part of so many women’s rights and activist groups,” she exclaims, still naive enough to not be dead inside. “And we were accomplishing so much for modern feminism! I can’t wait to find out how far equality in the country has come since then.”

Unfortunately, our time came to an end at that point, upon Shannon learning of the current Presidency and attempting to throw herself out a window, but we expect to hear more from her and finish the interview just as soon as she stops crying.

Jordan Curiel is patiently waiting for her turn to finally sit in a fucking egg chair.