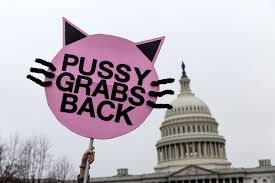 “Pussy grabs back.” I see it on pink cropped tees, I hear it chanted like a new feminist mantra, I feel it choking the air around me when groups of cisgender heterosexual white women speak on my behalf.

You do not need a vagina to be a woman. As women, gender gives us only the façade of solidarity, but a simple inspection of the current white-feminist agenda reveals the tiers of womanhood. Many self-proclaimed feminists have yet to normalize intersectional feminism, yet to fully recognize the spectrum of privilege and oppression that lies within the intersection of race, gender, and sexuality. It is natural for the fight for equality to be a self-preserving one, but it is dishonest to claim victory for all when the fruits of our labor are only harvested by a privileged few.

I grew up and went to school in Berkeley,  fundraising, protesting and organizing for a variety of social justice movements, surrounded by a wide spectrum of “wokeness,” or how aware someone is of the injustices in our society and its history. Seeing “pussy grabs back” shirts is a bitter reminder of the gaping abyss in our discourse. I see performative wokeness and trans-exclusionary radical feminism as the most prominent example of hypocrisy in the modern feminist movement. A failure to recognize and respect a spectrum of gender identities will ensure that in the fight for gender equality, power will ultimately stay within the assigned-gender binary.

At the L.A. Women’s March, I saw: “If Hillary was President, We Would All be at Brunch Right Now.”

White feminists will cease to march when they achieve their own goals. The pure ignorance in white performative feminism of the marginalized voices in the Women’s March is what continues to put black trans lives in danger. Surface-level activism, like what I call the “brunch sign,” embodies the idea that we should only care about our own personal levels of oppression and exploitation from the system. The brunch sign shows me the hierarchy of what it means to be a woman from the perspective of a cishet white women.

It’s not often that the powerful elites, influential feminists with platforms, advocate for the most disadvantaged peoples. In an effort to perhaps relate the most to Americans and most people who want gender equality, the message is vague and broad and we forget the important details: that #BlackLivesMatter was founded by three black women (Alicia Garza, Patrisse Cullors, Opal Tometi), that the LGBTQ+ rights movement began with two trans women of color at Stonewall, that our social movements have been carried on the backs of the least privileged groups within not only society but within their own communities as well, yet we fail them again and again.

Through carefully curated posts, cute slogans and $20 shirts from H&M that say FEMINIST across the chest, we can finally declare to the world that we care, with minimal effort.

Black trans lives would be in danger whether or not Hillary Clinton had won the presidential election. According to Mic, In 2015, if all Americans had the same risk of murder as young black trans women there would have been 120,087 murders instead of 15,696 murders. But gender violence occurs not just in the physical death toll: it’s deep rooted in our discourse. Currently, I’m taking a Film and Media Studies Class with Professor Mona Damluji here at UC Santa Barbara. In the class, we study cinematic cities, and last week’s film was “Tangerine,” an award-winning film starring two black trans sex workers, Kitana Kiki Rodriguez and Mya Taylor, who played black trans sex workers.

The story is sweet, tender, funny, and intimate, and it was shot all on an iPhone camera, which gave it an unparalleled candor. It was the first time I had seen a movie about trans women, played by trans women (I’m looking at you, Jared Leto), and I was deeply moved.

Men in my class did not feel the same way about the film.

One said that his Catholic faith kept him from accepting “prostitution” as “real work,” and although he “tried to keep an open mind,” he couldn’t comprehend “why anyone would ever want to live like that.”

Another said it wasn’t “real sex work,” that the women were “dirty drug addicts prostituting to support their meth addictions,” that he personally lived in L.A. and the “many transgenders” he knew “would be ashamed and disgusted by this depiction of transgendered people.”

The room felt raw and unsafe.

The activism I see is often limited to social media: the outward appearance of empathy and solidarity. Through carefully curated posts, cute slogans and $20 shirts from H&M that say FEMINIST across the chest, we can finally declare to the world that we care, with minimal effort.

It’s often difficult for those of us in privileged positions to empathize with less privileged people or lifestyles.

Most of us have chosen to buy into the trend of activism and “wokeness,” opting to turn the cheek to the grittier realities of supporting the voiceless. It is trendy to care, to post your protest pictures, fun to participate via stickers on your laptop or sending reaction gifs of Hillary Clinton to your group chat. We now consume feminism and wokeness, especially on college campuses, the same way people consume the Lululemon logo: meaningless, self-gratifying, empty worship of a brand.

Because being “woke” is the norm on campuses, we have also popularized this surface-level wokeness for the average high school and college student. If it’s truly the young people who will lead the future, is this the way we affect change? The Women’s March will soon give me the same heavy feeling that the San Francisco Gay Pride parade gives me every summer.

It’s often difficult for those of us in privileged positions to empathize with less privileged people or lifestyles. The power struggle in the gender binary between women and the patriarchy has been a long, conscious fight. The rampant transphobia in trans-exclusionary radical feminism is the power struggle within our own gender: until we normalize the idea that trans women are women, that trans women’s lives matter, the fight for “gender equality” has little integrity.

A Black Lives Matter banner at the North Carolina Gay Pride parade in 2015 read, “No pride for some of us without liberation for all of us.”

Katherine Chen wants people to realize that feminism is more complicated and nuanced than celebrating the bonds of sisterhood.

This is written by a person who hates women, who hates whites, who hates heterosexuals, and who especially hates white, heterosexual women. She (I presume) makes the claim that one doesn’t need a vagina to be a woman. A little later she makes the claim that a couple of white men shouldn’t be speaking about what it means to be a woman, among other things. This is ironic, considering that she? is (again I presume) a man pretending to be a woman. She hates TERFs because they want to reserve the gains they have fought so hard to obtain for… Read more »

Lmao asians get paid more on average than whites — seems like a racial pay gap to me. I can’t understand why people have some fascination with wanting to feel like they are the victims.

Just because Asians get paid more on average doesn’t mean that racial discrimination doesn’t exist. Your argument makes a good point, but it discounts the experiences of Blacks, Latinos, and Native Americans experiencing lower wages. Also, Asian women typically make less than Asian men as well as white people, so the wage gap can be viewed as gendered and racial. The two aren’t mutually exclusive.

More men in prison than women

You’ve got a wack worldview.

“We now consume feminism and wokeness, especially on college campuses, the same way people consume the Lululemon logo: meaningless, self-gratifying, empty worship of a brand.”
Thanks for putting this into words. Inasmuch as the greater turnouts for all these big marches and rallies post-2016 can be considered a positive, it’s hard not to wonder how many people attending are going to put in the work to affect real change once they post the Instagram pic and head home.

But if women of color were wearing “Pussy Grabs Back” shirts, you wouldn’t be triggered, right? Oh wait…